Are you ready for a little "eeeiiuuw" factor today? Research can sure turn over some unlikely facts from "back in the day." (Which is what makes it fun!) While doing research for The Gunslinger and the Heiress I found a tidbit that I just had to include in my story.

What would you do it you entered a restaurant and found the ceiling crawling with spiders?

Tillman Augustus Burnes, An Irishman known for his larger-than-life personality, grew up in San Francisco. There he came to appreciate the infamous Cobweb Palace at the end of Meiggs' Wharf where spiders and transformed the saloon with swags of cobwebs decorating the ceiling and upper walls.

When 'Till' came south to San Diego for health reasons, he got his first job at the Last Chance Saloon on 5th Street. He saved his money until he could buy his own saloon, naming it The Phoenix, located just one block from the docks. He opened his doors for business in 1875 and started collecting spiders to decorate his new place. He also hunted and trapped small animals and birds in southern California to display in cages, and bought exotic animals off sailors coming from South America. At one time, his menagerie housed a coyote, a bear, an anteater, and a monkey, along with exotic birds. 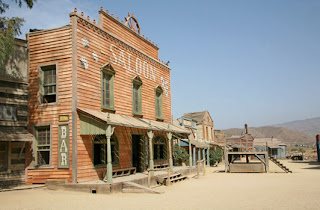 "Bruin" caused a few incidences quite honorable to a bear, but not appreciated by humans. Till chained him outside the saloon to a tree. One particularly hot day, a group of children taunted Bruin. Aroused from his nap, the angry bear broke loose of his chain and scared the children, creating havoc until finally lassoed. After that, Till had an iron cage built and brought the bear inside. That worked until one particular customer who liked Bruin and regularly let the bear lick the beer off his face, had the tip of his nose bit off. After the ensuing lawsuit, Till moved Bruin to his home.


After ten years, the spiders had a foot-thick wall of webbing over the ceiling. Visitors came from far and wide to see the animals and the spiders at work. The Phoenix was a city landmark and sailors made sure to stop there frequently. Till, along with his saloon, started a stage line down to Mexico and escorted tours into the back country.

It was just before one of these tours that his regular bartender became sick and Till hired a another bartender (unfamiliar with his business) so that he could quickly leave with his scheduled tour. Ten days later he returned to find that the man had cleaned out every last cobweb in the saloon, destroying his work (or the spiders work) of ten years.

Nowadays the health commissioner would shut such place down in a fast minute, but I imagine Till's Cobweb Emporium must have been a sight to see once in a lifetime!

How about you? What unusual sights have you come across in your travels?

Kathryn's most recent title is