From April 30 through May 9, 2014, I had the pleasure of vacationing with my husband in Ireland. Our son knew how much I’d always wanted to visit the land of my paternal ancestors and gifted us with a 35th wedding anniversary trip. Armed with a guidebook each, we did enough research to know which areas of the country we wanted to explore and our hotels were booked accordingly. But what I always love about traveling is that not everything goes as planned. One of my favorite museums was in a city we hadn’t originally studied.

Because our hotel for nights 4&5 was in the south of County Wexford, we had the opportunity to visit The Dunbrody Irish Emigrant Experience in the city of New Ross. (The previous name was the Dunbrody Famine Ship, but obviously this one sounds more intriguing). As a bustling port, New Ross was also the site where the William Graves & Son company imported goods (timber, cotton, sugar) from North America in the mid-1840s. When the Potato Famine hit in 1845 (lasting until 1849), many lower class Irish could no longer pay the rents on their tenant farms. Many were given the ultimatum by their landlord: the poor house or passage to North America, with the landlord paying the approximate 3 pound/person fee.


The 458-ton ship was built to exact specifications to one from the fleet used by Graves & Son, and had 2 first-class cabins, the captain’s cabin, crew’s quarters and a steerage compartment. Before boarding the ship, we viewed displays that described the circumstances of the Potato Famine and listened to first-hand accounts of those who had traveled and then written to relatives back in Ireland. We saw the bunks below decks, noted the approximate 7’x7’ space (approximately twice the width of first-class bunk & same length) that often housed an entire family. On each bunk were the names of the occupants from one voyage made in March, 1849. The list showed often 4-7 people shared the space—a couple and their children, a widow with her 4 children ages 3 to 13, or a bunk with the names of 4 unrelated women. Passengers provided their own bedding, as well as utensils for eating and drinking. The shipping company supplied weekly to each adult 3-1/2 lbs of biscuit, 3-1/2 lbs of flour, oatmeal or rice, or a proportionate quantity of potatoes (5 lbs for every 1 lb of other items) issued no less that twice a week. Three quarts of water per day was allotted for each adult. (The assumption is smaller amounts were allotted for children, but that fact was never mentioned.) 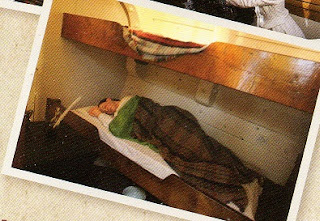 Being a first-class passenger allowed you unfettered access to the deck and fresh air, weather permitting. As a steerage passenger, you were allowed above decks for a very short (1-2 hours) period per day. Walking through the small spaces (often having to duck our heads) in a tour group of about 15 people made me wonder how 200 people could have shared the small space. If any of you have traveled with young children on an airplane or in a car, you know how testy they can get a being confined. Imagine that behavior on a voyage that lasted up to six weeks and often in rough seas. Because of the physical state of undernourished people and the lack of adequate sanitation, many passengers contracted typhus and cholera and died. Mortality rates of 20% to an alarming 50% soon renamed the vessels to Coffin Ships. 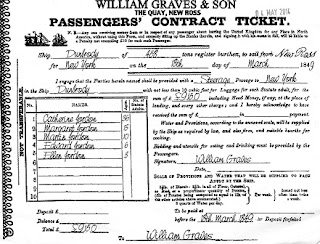 What tugged on our heartstrings were presentations by two women taking on the roles of a steerage and a first-class passenger. Dressed in clothes appropriate to their positions, these women related their stories for why they were making the trip. The steerage passenger, Mrs. Doolan, jostled a baby in her arms as she talked (in her thick brogue) of her ailing husband whose efforts on their farm hadn’t produced marketable potatoes, and how when faced with debtors’ prison, they agreed to emigrate but she fretted because they had no connections, no job waiting, and only 40 schillings remaining. She worried about her husband’s health and having enough food for her 5 children.  Next a well-dressed wife of a shopkeeper, Mrs. Fairchild, stepped up and, with a haughty expression, shared that her family (husband and two kids) were traveling so her husband could help his brother manage a thriving store in Philadelphia. The dichotomy between the lifestyles was glaring and poignant. Especially when we learned that halfway through the voyage Mr. Doolan died and right before landing in New York, Mrs. Doolan also died so the 5 children arrived on foreign soil as orphans. I only hoped they were looked after by some of the other passengers but who knows?


Hearing these actors deliver the life histories of people who actually sailed looking for a new life made history come alive. As we were leaving, my husband spotted a printed manifest of the voyage depicted in the museum and noted that two men with the surname of “Carroll” were among the passengers. Further research is needed to determine if either of those men is a distant relative. The facts learned in that 90-minute tour will stay with me for a long time because the presentation was made personal.


Many of my stories involve characters who are first- or second-generation emigrants from Europe or the British isles. This museum presentation is always in the back of my mind as I develop those family histories. So far, only one of my titles (a contemporary) is set in Ireland but I now have so much research to write another.