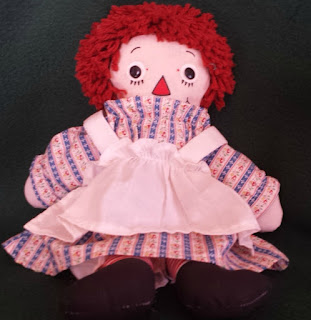 2015 marks Raggedy Ann's 100th birthday! Across the country doll clubs and organizations are celebrating her birthday. She certainly is a doll that has withstood the test of time and she looks very good for being 100 years old!

A little history on this beloved rag doll ~

Johnny Gruelle (1880-1938) was a cartoonist and writer at the time of Raggedy Ann’s conception. He found a faceless doll in the family home and drew a face on it for his young daughter Marcella. He chose the doll’s name from two poems written by a family friend, James W. Riley—“The Raggedy Man” and “Little Orphant Annie.”
(Of:  An’ the Gobble-uns ‘at gits you 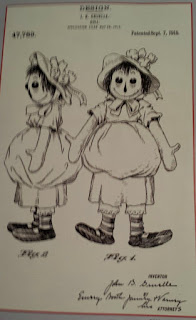 Ef you
Don’t
Watch
Out!   fame.)
On September 7, 1915, Mr. Gruelle received a patent for the Raggedy Ann doll. In 1918, he released a book of stories named the Raggedy Ann Stories. Marketed together, the doll and books did very well in sales. In 1920, Raggedy Andy, dressed in a sailor suit and hat, was introduced as Raggedy Ann's brother. He was a doll and also had his own stories - Raggedy Andy Stories.
At first, Raggedy Ann was homemade by the Gruelle family.  You might be surprised to know that the sweet, smiling stuffed doll with yarn hair was not originally a redhead, but a brunette! During her lifespan she has also had orange and even blonde hair! The original dolls had a real candy heart inside. Many old Raggedy Ann dolls have brown stains on the chest where children tried to taste the candy through the cotton stuffing. Her nose, eyes, and lips have gone through subtle updates, depending on the company making her at the time. Even her feet changed from sideways facing to forward facing. 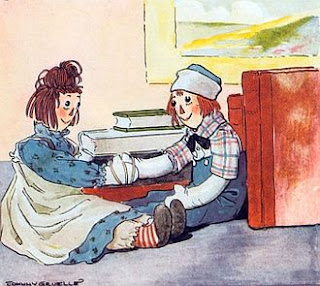 She has had quite an extraordinary life (along with her brother Andy.) Apart from of extensive legal battles brought on by an overreaching woman who tried to wrangle the trademark away from Johnny Gruelle, she has had McCall’s patterns made for her (1940-1990), three film shorts, a comic book (Dell), an animated full length film, a Halloween television special, a Christmas television special, a stage play, a Broadway stage musical, an animated television series, a Macy’s Thanksgiving balloon, a jigsaw puzzle, an annual Raggedy Ann & Andy Festival in Johnny Gruelle’s town of birth and the Raggedy Ann and Andy Museum. Raggedy Ann even has her own Facebook Fan Page! In 2002, Raggedy Ann was inducted in the National Toy Hall of Fame. Just listing all that makes me think she is one tired little doll!
Besides all that hoopla, many, many books have had Raggedy Ann as their heroine, most of them were written by Johnny Gruelle. Some books introduced other characters that have enjoyed being famous by association such as the Camel with Wrinkled Knees, Marcella, and Little Brown Bear.

Raggedy Ann and Andy harken back to a simpler time—before the internet and before battery-operated toys became all the rage. I’m afraid Raggedy Ann has a lot of competition from technical toys nowadays and many young girls don’t know the joy and comfort of having a rag doll to cuddle and love.

Do you remember your first doll?

What is one special gift you remember receiving when you were a child? Is it still around today?

The Gunslinger and the Heiress

a sweet western historical!
(Sweepstake is open to continental U.S. only and lasts until midnight 11/11/2015) 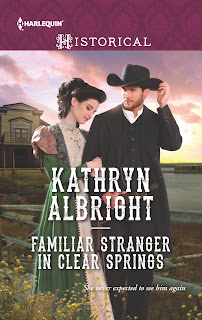 Kathryn Albright's newest book is a sweet western historical that takes place in early San Diego. You can pre-order Familiar Stranger in Clear Springs here.  Although there is no Raggedy Ann in this particular tale, dolls have been known to make their appearance in other stories by Kathryn.