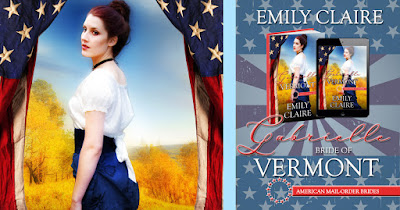 Gabrielle isn’t looking for love, but circumstances demand she find a husband immediately. Can she agree to marry the only man who’ll accept her terms, even if it means moving to Texas?

Boone Dillingham believes a wife will be the solution for his loneliness. Too bad his heart belongs to a woman other than the one he’s planning to marry!

Boone and Gabrielle are determined to make their marriage of convenience work, but they’re both toting a little more luggage than the other one knew about. Could it be that their union is less about convenience and more about having their hearts renewed?

Gabrielle, Bride of Vermont is an inspirational western historical romance that takes place in 1890. The FREE prequel to the series can be found HERE.

Excerpt from Gabrielle, Bride of Vermont:

As they stepped onto the porch, the door opened and a handsome man walked out.    “You must be Gabrielle. I’m Colby Clayton. Most folks just call me Doc Colby. Welcome to your home in Texas. Right this way, ma’am.” 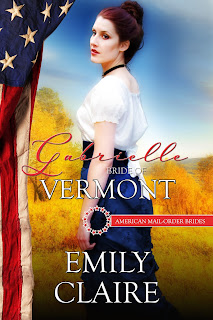 Everyone is so kind here. It’s so different, already.
­     Colby led her to a room near the front of the home. The man on the bed had his eyes closed when she first walked in. She was thankful for the opportunity to look at him before he looked at her. She could see he had plenty of dark, wavy hair under a white bandage that was across his forehead and wrapped around his head. He seemed to take up nearly the entire length of the bed, so he must be tall. His jawline was strong. She took a step closer and stood near his right side.
Boone’s eyes fluttered open, and he stared up at her. Gabrielle had never gazed into such dark eyes. The lashes were the longest she’d ever seen on a man. He had a nice beard. He squinted his eyes and worked to focus them on her.
“You’re the most beautiful woman I’ve ever seen. Hello.” He smiled at her.
The way he looked at her made Gabrielle’s stomach feel strange. She suddenly felt as though she couldn’t get a full breath. A feeling of warmth spread from her stomach to the top of her head, turning her cheeks bright pink as it made its way up.
Gabrielle didn’t know how to respond, and even if she could, her mouth failed to open even though she willed it to. She wondered if she was getting sick. The warmth she felt reminded her of the fever she’d had the day the mill burned to the ground. Was she relapsing? She’d felt fine all day, just tired from her trip. But still, it could be something coming on suddenly.
“I don’t believe we’ve met. I’m Boone Dillingham. Sorry I can’t get up to greet you properly, but the doc here says I have to rest for a day or two. Folks say he’s pretty good, so I guess I’ll do like he says.” He grinned, the look in his eyes boyish. He reached out his hand toward her.
Instinctively, she reached out and accepted it. A bolt of electricity traveled from her palm to the back of her neck.
Boone smiled when he felt her touch him.
She pulled back her hand a second after she’d felt the surge and took a small step backward.
“Oh now, don’t go away, pretty one. I like you. You’re good medicine.”
His grin lit up his face. Gabrielle was lost in it, briefly. “No, I won’t go away. I just need a little water. I’ll be back shortly.”
She saw Clyde and Mattie glance at each other as she left the room. As Mattie followed her out to show her the kitchen, Clyde chuckled. He was going to enjoy watching how the Lord worked this thing out. He followed them into the other room.
Boone sighed as she left and closed his eyes slowly. “I’m better now, Doc. I’m just gonna lie here and rest, though.”
Doc Colby nodded. “I think that’s a good plan.”
Mattie poured some water for Gabrielle. “Well, now. What do you think of our friend Boone?”
Gabrielle looked from Mattie to Clyde and then back to Mattie. “Is he always so outspoken? You know, saying everything he thinks like that?”
Clyde and Mattie shook heads simultaneously.
“He can be talkative, but he doesn’t usually say what he’s feeling quite like that. I usually have to drag things out of him,” Clyde said.
Gabrielle asked, “How long have you known him?”
“It’s been a while. Seven or eight years, I reckon. Something like that.” Clyde looked questioningly at Mattie, and she nodded in agreement.
Mattie stepped close to Gabrielle. “The situation you expected when you agreed to come here has changed a bit. Are you still planning to stay? We can figure some other plan, if you need to.”
Gabrielle didn’t hesitate. “I agreed to marry a stranger. Accepting his money and coming here was an act of commitment. I won’t back away from it. He’s a stranger either way. I didn’t know what he was like before and it didn’t matter. It shouldn’t matter now, I guess. We’re about to be married, and he’s had an unfortunate accident. If it had happened twenty-four hours after I’d arrived, I’d be just as committed as I am now. It doesn’t change anything.”
Just then they heard a commotion from the bedroom. They hurried to see what was going on. Colby was standing at the foot of the bed, laughing quietly, amusement written on his face.
“Everything all right in here?” Clyde asked, looking at Colby and then at Boone.
“Heck, yeah!” Boone said loudly, grinning from ear to ear. He nodded toward Gabrielle and pointed in her direction.
“Doc Colby just told me that pretty little woman is going to be my wife. It was worth getting my head busted open for that!”
He smiled broadly at Gabrielle. “Did I already ask you to marry me?”
Gabrielle stepped closer to Boone’s bed. “Well, you invited me to move to Texas to become your wife.”
Boone adjusted his bandage, slightly. “And what did you say?”
“I came to Texas, didn’t I? I believe most folks would consider that to be a ‘yes,’ don’t you think?” Gabrielle asked.
Boone grinned again. “Whoopee! Sounds like a ‘yes’ to me. Definitely does. Thank you very much for agreeing to marry me. Let’s have the wedding right now!” 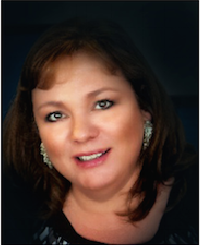 Emily Claire lives in Arlington, Texas, with her husband and four children. There's a lot going on in her life! Home-schooling two kids, with another in high school and the oldest in college, keeps her on her toes.

Along with the usual roller coaster of joys and challenges that come with being a wife and mother, Emily shared the following:

"I'm blessed to wear multiple hats. Proofreading books and documents has always been fun for me. I realize that's unusual! Typos frequently jump up and wave in my direction. Additionally, I provide administrative support for a friend's therapy center for children with autism and other behavioral issues.

After proofreading books for bestselling author Kirsten Osbourne, she said, 'You're going to write a book.' It wasn't a question, it was a statement. 'I don't write. I proof,' I countered. She disagreed and proceeded to strongly encourage (okay maybe she gently forced) me to 'just do it.'

REAL. LIFE. STORIES. My desire is to share "G" rated (“sweet”) stories about people facing the ups and downs that life throws at them. I prefer settings that reflect a simpler pace and lives with less clutter, but the solutions to life’s puzzles are remarkably the same whether they occur in the year 1416 or 2016.

I considered what was Important to me. I'm a Christian. I've struggled, and I still work to overcome issues in my thoughts and actions. I've been given a lot of grace in my life and I’ve learned a few things about growing and healing along the way. I wanted to share it. But, I wasn't interested in writing about myself.

I’m honored when I hear from my readers that they’ve laughed, or cried, or contemplated deeper meanings. That's why I write what I write."

Emily Claire would love to hear from you!


Other books by Emily Claire:

www.amazon.com/Yet-Forgive-Coltonville-Chronicles-Book-ebook/dp/B015HTU1OS
Posted by Zina Abbott Author at 1:00 AM