Katrion (Katie) James, the oldest daughter of the Broken J ranch has always 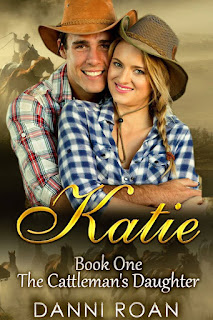 been the serious, responsible one. Can she finally let go and answer the call of her heart, or will her mother’s dying words forever bind her to a life without a love of her own?

Strong, independent and dedicated to her family Katie believes that life is all about responsibility. Working alongside her father to see that the ranch is successful she has all but forgotten she is a woman.

Wilson Robertson is down on his luck and tired of dusting the trails. Pushing thirty he longs for a piece of land of his own; a home. But when he meets the cattleman’s daughter, his dreams could be lost for good

Can two people determined to live up to their responsibilities learn that there is more to caring and loving than simple doing the right thing? Find out in this sweet historical western romance.

Will Robertson was down at the heel and down on his luck.  He’d finished his turn at driving a big herd up from Texas just to have the foreman cheat the hands out of half their pay. He was fed up, angry, and tired of working his tail off for another man.  There had to be something better.  He looked out across the bustling dusty streets of Kansas City and sighed.  At least he had a few dollars, his horse and rig, he thought looking at the red roan pony at the hitching rail before him.   But how was that going to help him now, cow hands were a dime a dozen on the streets of this town and he’d be hanged before he went back to Texas with the crew he’d come up with.  He had to face it there was nothing for him, he didn’t want to sign on for another trail drive, and he wasn’t cut out for city life.  He’d just have to see if he could find work and soon, or he’d be plumb broke.  He looked at his faded jeans, then dusted them off as best he could with his tattered hat and headed to the mercantile across the street.  Maybe someone had posted a job there.

On the other side of the street a large sign hanging above the false fronted square building read ‘James’ General Mercantile’. Perhaps the owner would know of a place he could get a meal cheap and maybe find a job. A tiny bell tinkled above the door, announcing his arrival as he stepped into the store.  The smell of leather, burlap, and spices assailed his senses and he stood a moment letting his eyes adjust to the dimmer light of the interior.  At first it didn’t appear that anyone was minding the store, and he took the time to scan the shelves and display tables filling the space. Barrels, crates, and burlap sacks lined the front wall under a bright display window. Small square tables were stacked with denim trousers, a variety of shirts, and even boots or a display of small and larger farm implements. Brightly colored tins, jars and bottles fill shelves on the other two walls.

Suddenly a slim, middle aged woman popped up from behind the tall counter near the rear of the establishment.  She must have been reaching for something on the bottom of the floor to ceiling height shelves arrayed along the back wall.  “Well hello there.” She said cheerfully. “What can I get for ya?”

Her bright smile was contagious and he couldn’t help but smile back, as he crossed the well-stocked room in a few strides. “Mornin’ ma’am, I’m wonderin’ if you know of a cheap place to get some grub, and maybe if there’s any work around.”

“Come a little closer.” She called waving her hand at him impatiently “So I can get a look at ya.”

He then stepped up to the long wooden counter and for just a moment he felt like prize bull at auction as her sharp blue eyes assessed him.

“Cowpuncher, are ya?” she asked, almost to herself as she studied him.

“Yes ma’am.” He replied quietly twisting his tattered Stetson in his hands.

“Jeremiah”. She then bellowed over her shoulder making Will jump. “Don’t you worry son, my husband will know just what to do with you.”

“What are you hollerin’ about now woman?” A man’s voice boomed as heavy foot falls crashed down a set of stairs at the back of the building.

“We got a fella needin’ work.” She yelled back with a twinkle in her eye.

“Oh, we do, do we?” The voice replied inquisitively just as a tall square man stepped out of the doorway behind her and grinned. For a moment Will Robinson considered bolting as the man looked at him with a predatory gleem in his eyes. “Well, young man. What kinda work are you looking for?” the older man asked with a smile.

“Ranch work of course, sir.” Will replied feeling like he couldn’t quite get his bearings even if he had both feet firmly planted on the plank floor.

“That’s grand, just grand.” The big man boomed and chuckling, threw and arm around his shoulders. “Now why don’t you come on upstairs and we’ll have a cup of coffee, you can tell me all about yourself. I think I know just the job for you.”

Joshua James stepped out on to the front porch of the ranch house a big grin splitting his grizzled face. With one hand he tucked an envelope into his breast pocket then patted it before placing his wide brimmed hat on his head of snowy white hair.  For a long moment he gazed around him at the home he’d build.  The large barn, the workshop, even the bunk house and chicken coop.  He breathed deeply of the early morning air. Then patted the letter again.  It had been a long time since he’d heard from his brother Jeremiah.  He’d almost thought he might never get the answer he’d been waiting for, but now… He smiled again.

“Morning boss.” A hand said as he walked Joshua’s horse to him.

“It sure is.” The old man replied and taking the reins, swung up on his buckskin gelding and started whistling as he turned toward the open prairie.  Stopping his horse for the third time on the short ride he pulled his brother’s letter from his breast pocket and read it once more.

I believe I’ve found just what you have been looking for.  It should be arriving in about a months’ time hopefully still in good shape. Mabelle helped with the picking and assures me that the packaging is just right; made to order. We had quite a time procuring such an item for you. The mercantile is busier than ever but not all items are of the same standard and the choosing had to be done with care.

We are all well here in Kansas. Have you had any word from Brother Jonas?  I’m sure he is working equally hard at providing you with what you need. Do be patient brother as times are hard everywhere.  Mabelle sends her love to you and the family.

Joshua tucked the letter back in his breast pocket once more, with a smile and a chuckle then started whistling again.

You may purchase The Cattleman's Daughter  by clicking HERE.

Danni Roan, born in rural western Pennsylvania, has always loved the country life. Her first work published under her real name, Paula Liddle-Beem, is a collection of folk essays about childhood in the lush, green mountains of PA. Being a teacher of English and English as a Second Language for the past twelve years has only inspired Danni's love of writing Western Historical Fiction. After receiving her Masters of Education in Teaching English as a Foreign Language she determined to indulge her passion for fiction writing. Teaching both in the USA and abroad has exposed Danni to a wide range of people from all walks of life and she tries to capture that unique character in her work.

Click HERE to reach the Author's Amazon Author Page.
Posted by Zina Abbott Author at 1:00 AM