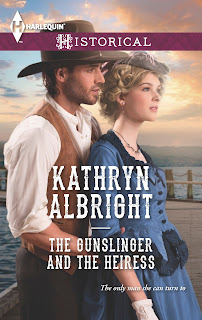 The stories I write are often set in southern California where I grew up. San Diego’s history, with its whaling port, ships, and “hide” industry along with gold discovered in the back country, makes it a fascinating place to write about. I love the Spanish and Native American influence there too.


The Gunslinger and the Heiress,

takes place when Wyatt Earp owned three businesses in San Diego, when the Hotel Del Coronado had its grand opening, and when a young boy stumbled into town saying that he had been living on an island off the coast with pirates. No one believed him until he produced a few items from the pirate’s stolen booty. (I do love adventure in my books but this is for real!)

The opening of a famous hotel figures prominently in my book and so I thought I’d share a bit about the place. The Hotel Del Coronado opened in February 1888, as the vision of two San Diego entrepreneurs. Elisha Babcock, Jr. had been a railroad executive in Indiana who came to the coast for his health and his friend, H.L. Story (of the Story and Clark Piano Company) envisioned a place where people could come to escape the harsh winters in other parts of the country.

At the time, the flat peninsula of Coronado looked like a huge sandbar. The main occupants were jack rabbits and quail and sagebrush. San Diego was still a sleepy town without railroad access and to get to the “island” one had to go by boat across the harbor or by horse and carriage twenty miles around on the thin strip of sand known as Silver Strand.

Babcock and Story bought the entire peninsula for $110,000 in 1885. They had a lot of work ahead of them. Fresh water had to be piped all the way from the San Diego River (at Old Town), a ferry system and railroad had to be put in place in order to transport building supplies. They even built a power plant—second only to San Francisco's in the state. (Electricity in California was virtually non-existent at the time.)

They marked out their town in a grid formation, planted exotic trees and bushes in place of the sage, started a foundry and a laundry that would support the main focus of the island—a resort hotel they wanted to be “the talk of the western world.” Architects submitted their proposals and Clinton Day’s plan was approved—a striking and unusual Victorian. Shortly after, the Hotel Del Coronado became known simply (and affectionately) as “The Del.”

Opening day, which is featured in my story, was a “soft” opening. The kitchens were not completed for another three weeks. Guests who had made reservations found their rooms unfinished. It didn’t stop people from arriving…and continuing to come.

The Hotel Del Coronado is now a famous National Historic Landmark that commemorates the history of the United States. It is world renowned and has been host to more than fourteen presidents, foreign leaders, well-known Hollywood celebrities, and my brother on his honeymoon. (Does that make me famous by association?)

Blurb from The Gunslinger and the Heiress:

Hannah Lansing, heir to a large shipping venture on the west coast, must discover the fate of her lost ships or marry to save the family business.  Unfortunately, the one person that can help her is a man she once bitterly betrayed.
Caleb Houston still carries the scars of his last encounter with the Nob Hill princess although wild horses wouldn’t drag that fact out of him now. The sooner she gets her answers and leaves town, the easier he’ll breathe.
But when her digging unearths more than the missing cargo, disturbing a sleeping rattler, she becomes a target. And Caleb finds that guarding her life could mean he’ll lose his own heart.
* * * * * * * * * * * * * *

Links for my books ~    Amazon    Barnes and Noble

I would love to hear from you! Introduce yourself and tell me what draws you to historical fiction!