Five Things I learned From Writing THE MENACE TAKES A BRIDE 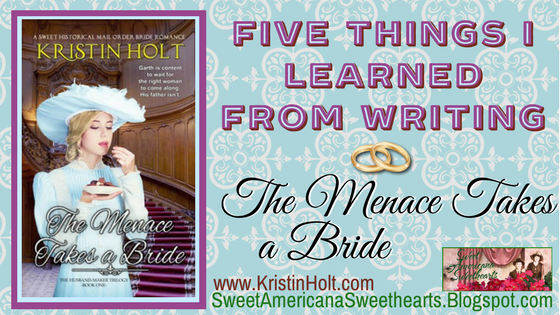 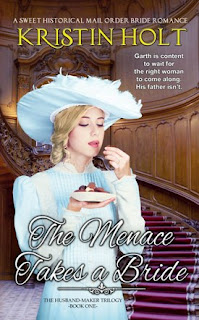 The Menace Takes a Bride

The Husband-Maker Trilogy, Book One
Garth is willing to wait
for the right woman to come along.
His father isn’t.

We're all familiar with the few great fortunes made and kept in the California gold fields near Sutter's Mill. Less familiar are the fortunes made in timber and logging in northern California. Both contributed significantly to new wealth early in the latter half of the 19th century. Single, young men flocked to California, lured by the dreams of quick riches, and my fictitious character, Luke Wakefield fit right in. It's all back story, as his French mail order bride, Cadence, brought her family's legacy of fine chocolate-making. Luke and Cadence had one child who survived to adulthood, Garth Wakefield, my main character in The Menace Takes a Bride. The timeline works splendidly such that Garth, a son of a successful gold miner is pushing age 30 when this book opens. Luke and Cadence's mail order marriage worked out beautifully, so Luke is confident his son Garth's will as well.

Frequently Asked Question: Why is Garth a Menace? Or... Why is the title The Menace Takes a Bride?
Answer: See the opening two paragraphs of the book.


LUKE WAKEFIELD GULPED WEDDING CHAMPAGNE, but he was in no mood to celebrate. “Any unmarried man over twenty-five years of age is a menace to society.”

He glared in Garth’s direction. His son danced with the Hollis woman, holding her too close, his lips brushing her temple. As if he intended to ask for her hand. Ha! Luke would never live to see his only child safely wed.

And there you have it. The reason why Luke (a grumpy "old" man, has decided his son is a "menace").

Domingo Ghirardelli, an immigrant who dreamed of striking it rich in the great Gold Rush, eventually founded a confectionery company in 1852 that would become the Ghirardelli Chocolate company. Ghirardelli played a central role in introducing chocolate to American consumers, from its San Francisco factory. It seems only natural that a rival company, (my fictitious) Cadence Chocolatier would be founded in my (relatively nearby, also fictitious) Liberty, California. Originally a kitchen and shop, Garth's mother, Cadence, developed a thriving business which he inherited. Garth's immediate problem, as The Menace Takes a Bride opens, is his meddling father (Luke) has forged Garth's signature on a paper marriage document, signing over complete control of Cadence Chocolatier--multiple factories (as the Industrial Revolution has assisted large-scale production), original shop, bank accounts, leadership of the company, and the Whitfield mansion--to the bride Garth doesn't want. 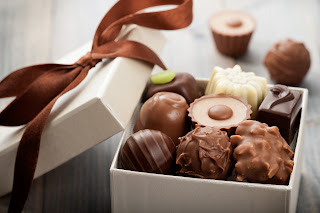 The American west most certainly had a Victorian Era. Many expectations from the United Kingdom (where one might more fully expect Victorian culture to prevail given that's where Queen Victoria reigned), but it's apparent a big fight (The American Revolution) to break free from the British didn't go so far as to abandon all interest in society, fashion, and culture. Victoria's coronation came roughly 60 years after the beginning of the American's battle for independence yet the United States, especially once women moved west and brought civilization with them, adhered quite closely to Victorian expectations of morality, behavior, etiquette, courtship, entertainment, and marriage. Connected couples exchanged love letters. And yes, the wealthy (like the Wakefields) did present diamond rings upon engagement.

Snippet, in Luke's point of view, from the end of the first scene of Chapter 7:

Luke had lived through two wars and survived a gold rush. More importantly, he’d been a husband for twenty-two glorious years. A pang of loneliness tightened about his heart. He’d been around plenty long enough to understand how a courtship ought to progress.
Garth may have ordered him to stop giving presents, to stop meddling, but Luke knew better. Besides, ice cream didn’t count. It was food, not a bauble and certainly not meddling.
On the porch, he heard Mitzi’s moans of pleasure. Luke grinned at her little-girl delight. Until tonight, the poor thing hadn’t ever tasted ice cream.
Imagine that. Ice cream. He shook his head, amazed at the simple life she’d lived.
Silhouetted against the setting sun, Luke watched with pleasure as Mitzi rested her head on Garth’s shoulder. From this distance, he couldn’t quite hear what they talked about, but they were talking. That was good enough to ease an old man’s concerns.
Cora stepped up to his side, her tread light on the kitchen floor. She folded her arms and watched the young couple for a minute, perhaps two. “You did a good thing, Luke. A very good thing.”
Yes, he had. The more he saw of Mitzi and Garth together, the more he knew he’d done the right thing.
They looked like a husband and wife, and the image made Luke grin.
A husband. He’d made his boy a husband.
He wanted to jump up and down, hoot and holler with the thrill of victory—but that would interrupt the most domestic, tender thing he’d ever seen going on out on the porch swing.
An idea came to mind, a most exciting thought. It wasn’t a gift, he rationalized. Merely her due. Mitzi was a Wakefield, not a nun. She deserved more than a plain gold wedding band. If Garth had found Mitzi on his own, he would’ve wooed her with a diamond the size of a quail egg.
If Garth knew how to court properly, he would’ve bought Mitzi a diamond already. The boy would appreciate a little help getting the shopping done.
“I need a woman’s opinion,” he said to Cora.
“Oh?”
“Tomorrow morning, you and I are visiting the jeweler.”

Many new developments occurred in time for the well-to-do Wakefield family enjoy them in the time-frame of this book (1895)... and made Mitzi (raised in an orphanage in crowded Chicago) take note. Wakefield House sported a built-in bathtub with running hot and cold water plus a flushing, indoor toilet. One of the 'mean girls', Helen, receives an over-the-top birthday gift from her doting millionaire father--a motorized carriage (automobile). Yep. Perfectly historically accurate, for the 1%, particularly near the busy San Francisco port.

Yes, it's traditional for couples to meet, court, fall in love, decide to marry, and tie the knot. I think that's why I'm fascinated with mail order bride romances. It's so backwards to marry first (or after a little long-distance courtship through letters), court a little more in person (or not), and eventually, maybe, fall in love. In Romance, we expect our main characters to fall in love, to win their hard-won happily-ever-after through much difficulty, challenges, and proving they deserve one another.

I particularly enjoyed the development of Garth and Mitzi's romance, showing key scenes wherein they fall in love, admit it to themselves and eventually to each other. For them, love most certainly came after marriage. I do hope you'll enjoy reading their story as much as I enjoyed writing it.

The Menace Takes a Bride is one of my four current mail order bride-themed titles (out of six total). Many more are on the way. Book 2 in The Husband-Maker Trilogy, The Cowboy Steals a Bride, is also available. Book 3, The Doctor Claims a Bride is due out soon.

All books by Kristin Holt are currently FREE Reads with kindleunlimited.

Interested in a book description for either of these The Husband-Maker Trilogy titles? Click on the boxes above to read the blurbs on Amazon, OR visit my website for blurbs of The Menace Takes a Bride and The Cowboy Steals a Bride.