Masonic and Its Mines


North and East of Bridgeport in Mono County, California, and not far from the famous former gold mining town of Bodie is another ghost town named Masonic.

Gold was discovered in this region about 1860. Because most of the miners were Freemasons, it was named the Masonic mining district. However, due to the excitement over the discoveries in both nearby Aurora and Bodie, this more difficult to access region was not fully developed at that time.

In 1900, a sixteen year-old boy from Bodie, Joseph Green, found a rich ledge of gold and filed his claim as the Jump Up Joe Mine. Unfortunately, young Joe did not have the funds to fully develop the mine. He gladly sold it Warren Loose for a good price. 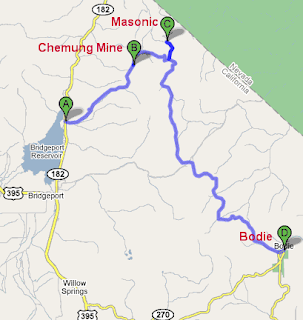 A couple of years later, among the aspens and pines of this desolate region, other ledges of gold were discovered, the most promising being found by J. M. Bryan, Caleb Dorsey and J. S. Phillips of Pittsburg. They made their discovery on the Fourth of July, 1902, which prompted them to name their claim the Pittsburg-Liberty.

By that time, between the ore found in the Pittsburg-Liberty and the Jump Up Joe, the partners from Pittsburg decided there was enough ore to justify the building of a cyanide stamp mill to separate out the gold. Once it was completed, the new 10-stamp Pittsburg-Liberty Mill powered by a dynamo and equipped electric lights pulverized 30 tons of ore a day and boasted a payroll of 50 men. 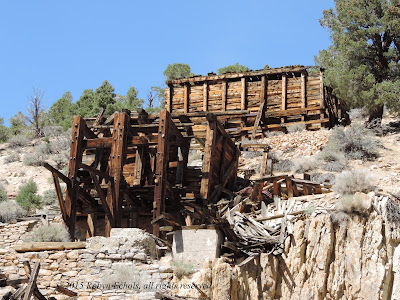 Other prospectors soon found other outcroppings of gold above and below the original site of Masonic. Each area acquired a cluster of cabins. The town, originally called Lorena, soon developed into a community of three sections, Upper Town, Middle Town and Lower Town.

However, they relied on what became known as Middle Town and became melded into one community known as Masonic. Middle Masonic boasted not only the cyanide plant, but the post office as well as a store, a tiny hotel, rooming and boarding houses and two saloons. The post office was a board and batten shack that was windowless except for a slider in a frame that allowed the mail to be handed out of the window to the miners. Middle Masonic was the source of community spirit, liquor and entertainment for all those living in the Masonic region. The town also had a school, a butcher shop and telephone service as early as 1905. It reached its height between 1909 and 1911.

At its peak, Masonic boasted 1,000 residents. For a time, it even had a local newspaper. At the town's height in September 1908, the paper reported:

"Over 50 couples tripped the light fantastic to the excellent strains of the Bodie Orchestra.
Supper was served in the Jeffrey Hotel."

This dance was typical of the entertainment to be found in Masonic. The citizens of Masonic took pride in maintaining a law-abiding, hardworking community unlike the wild and lawless "Bad Man from Bodie" reputation that stuck to their neighbor to the south, Bodie. There were no churches in Masonic, but on the other hand, there were no brothels.

Even without the gunshots found in Bodie, Masonic was not a quiet place to live with the stamp mill. Unfortunately, between lawsuits, mill breakdowns, rising shipping costs, declining gold prices, and the depletion of ore in the mines, the town started into decline in 1911. By 1950, the town and its mines were abandoned.


Since the cyanide plant for processing the gold ore was in Middle Masonic, the upper mine built a tramway to transport their ore down to the plant.


A loading chute for ore brought from other mines was located just before you get to Masonic.


On the way to Masonic is the Chemung Mine and Mill located at 8,000 at the base  of Masonic Mountain. Founded in 1909, it was never a consistent producer. However, endless legal wrangling kept business tied up in litigation for years. Before it was all resolved, gold mining in the region had become unprofitable for all the mines.

Local legend claims a deranged ghost haunts the mine, but only takes offense if visitors show up on Saturday nights.

Masonic is located in a remote region infused with pockets of beauty surrounded by the mountain ranges that straddle California and Nevada east of the Sierra Nevada Mountains.

Zina Abbott is the pen name used by Robyn Echols for her historical novels.

The first two novellas in the Eastern Sierra Brides 1884 series, Big Meadows Valentine and A Resurrected Heart, are now available.

The author is a member of Women Writing the West, American Night Writers Association, and Modesto Writers Meet Up. She currently lives with her husband in California near the “Gateway to Yosemite.” She enjoys any kind of history including family history. When she is not piecing together novel plots, she pieces together quilt blocks.