Images of the Past by Shanna Hatfield

The fifth book in the Pendleton Petticoats series led me down the road of researching the Umatilla Indian Reservation during the early years of the 20th century. One of the best resources I've found for gleaning the details I need is through a collection of photographs from Lee Moorhouse. 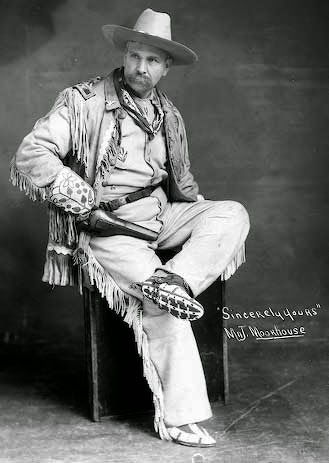 Moorhouse was a photographer and an Indian agent for the Umatilla Indian Reservation. From 1888 to 1916, he produced more than 9,000 images documenting urban, rural, and Native American life in the Columbia Basin, particularly in Umatilla County, Oregon, where the reservation is located. Born in Marion County, Iowa, as a child Moorhouse traveled along the Oregon Trail to Walla Walla, Washington with his family in the 1860s. He worked as a miner, surveyor, rancher, businessman, civic leader, real estate operator and insurance salesman during his lifetime. In addition to acting as an Indian agent from 1879 to 1883, he served as Assistant Adjutant General of the Third Brigade of the Oregon State Militia. Unlike most amateur photographers of the time, Moorhouse worked with and mastered the cumbersome and finicky equipment of professionals, including gelatin dry glass plate negatives, large cameras, and a tripod. Many of his photographs exhibit a keen eye and deep appreciation for his subject matter that went far beyond the amateur. His photographs of the Cayuse, Walla Walla and Umatilla tribes are not only of historical significance, but also incredibly crisp and beautiful. Moorhouse owned an extensive collection of Native American "curios" including baskets, weapons, regalia, bags and horse trappings--from a variety of tribal cultures. He exhibited the collection at local fairs and used it to adorn people who came to sit for portraits. Like so many photographs from that era, the posed portraits aren't considered accurate ethnographic documents. However, the images taken on the reservation are important records of tribal clothing and dwellings. Moorhouse collected so much more than images with his photographs since he commonly inscribed the name of the subject on his negatives. This information has played an important role in identifying members of the Confederated Tribes of the Umatilla. I thought I'd share a few of my favorites from his collection. 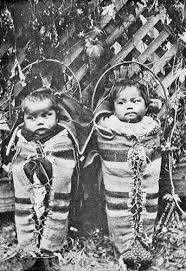 The "Cayuse Twins" (Al-om-pum and Tox-e-lax) became a signature piece for Moorhouse when he took their photos in 1898. He sold more than 150,000 copies of their images. 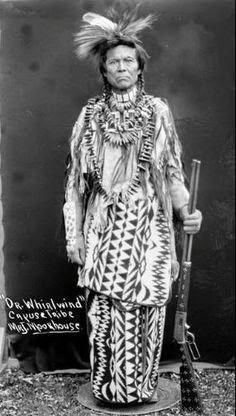 This is "Dr. Whirlwind," one of Moorhouse's favorite subjects. From information I gathered, I believe his name was David Young Chief. As a young man, he carried dispatches for Colonels Wright and Steptoe during the Indian uprisings for 1855-56. He also served as a scout during the Sheepeater Campaign of 1879. Check out the embellishments on his gun. 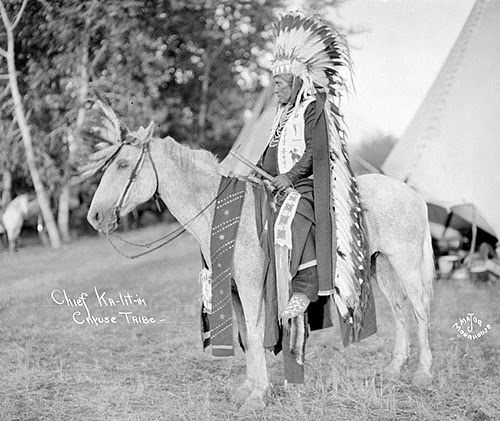 The details Moorhouse captured are just amazing, like the traditional dress of Chief Ka-lit-in of the Cayuse Tribe. 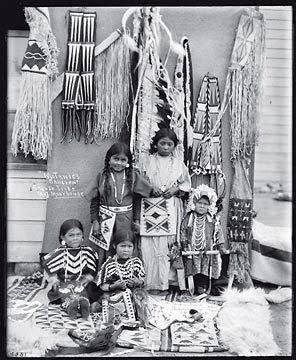 These are the children of Parson Motanic. You can see the girls wear the traditional wing style dresses. Their father was a successful farmer and at one time owned one of the largest properties on the reservation, raising both wheat and livestock. I think the girl on the far left and the one standing next to her look like they are full of sass and fun. 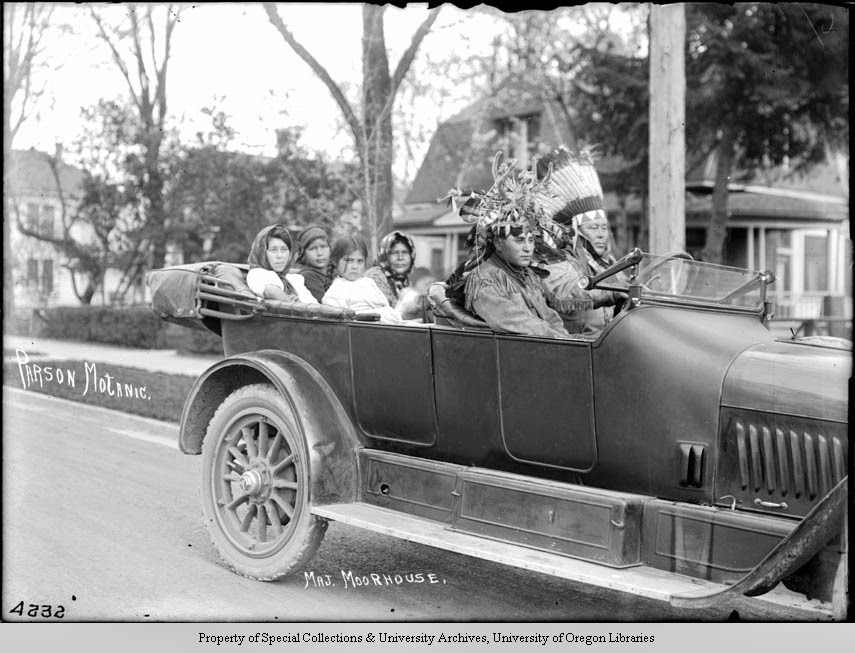 Parson became an ardent Presbyterian and served as an elder at the reservation church for many years. He was often seen driving around Pendleton in his Hudson automobile. 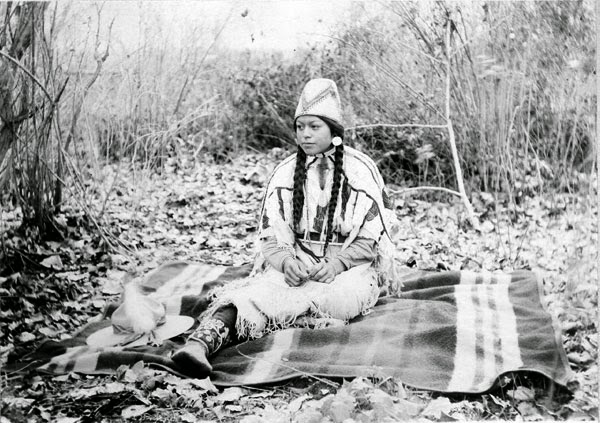 This is Ku-massag, also known as Agnes Davis. She appears in several of Moorhouse's photographs. Here, she wears traditional dress, including a woven hat Moorhouse often used as a studio prop. 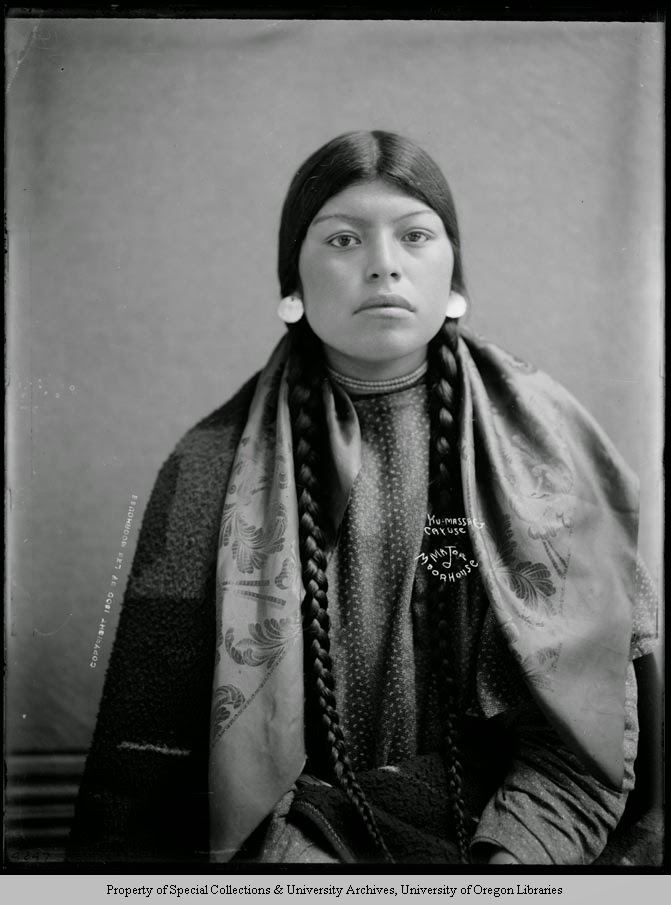 And here she is in a studio pose. Isn't she stunning? Look at that beautiful skin! I, for one, am so glad Moorhouse decided to pursue photography as a passion, if not a career. Thanks to his diligent efforts (and the University of Oregon libraries), the world can get such a wonderful glimpse into a way of life that is no more.

The book all this research went into is Lacy (Pendleton Petticoats Book 5). 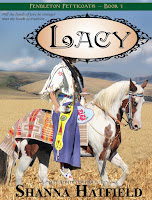 Eager to make her own way in the world, Lacy Williams leaves behind her family on the Umatilla Reservation and accepts a job in Pendleton at the telephone office as an operator. The work she takes in stride, but dealing with the unfamiliar, unsettling feelings stirred by the handsome banker across the street is an entirely different matter.
Grant Hill wants a wife.
However, not just any wife will do. If that were the case, he’d make an announcement at the mercantile and cause a stampede to the church. Grant wants a woman who will look beyond his material wealth and see into his heart. When he's all but given up on the possibility that such a woman exists, he runs into the lovely Lacy Williams.
The two of them must strive to discover if the bonds of love are stronger than the bonds of tradition in this sweet historical western romance.

Grant chuckled. “I didn’t realize you were so interested in romance.”
Her footsteps slowed to a halt. Lacy looked at Grant as if he’d begun speaking in some foreign language she didn’t understand. “There isn’t a female alive, Mr. Hill, that isn’t at least a little interested in romance. Regardless of where they come from, what they do, or who they are, every woman craves a little romance from time to time.”

A hopeless romantic with a bit of sarcasm thrown in for good measure, Shanna Hatfield is a bestselling author of sweet romantic fiction written with a healthy dose of humor. In addition to blogging and eating too much chocolate, she is completely smitten with her husband, lovingly known as Captain Cavedweller. Shanna creates character-driven romances with realistic heroes and heroines. Her historical westerns have been described as “reminiscent of the era captured by Bonanza and The Virginian” while her contemporary works have been called “laugh-out-loud funny, and a little heart-pumping sexy without being explicit in any way.” She is a member of Western Writers of America, Women Writing the West, and Romance Writers of America.

*****
Resources: Grafe, Steven L. Peoples of the Plateau: The Indian Photographs of Lee Moorhouse, 1898-1915. University of Oklahoma Press, 2005. Photographs: Special Collections and University Archives, University of Oregon For a quick overview of Moorhouse's work, you can also find many images on Pinterest.
Posted by Shanna Hatfield at 9:41 AM