Turners in 19th Century St. Louis and Beyond by Zina Abbott 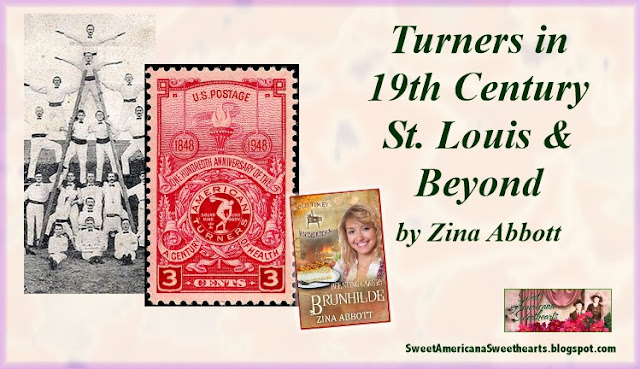 Turners are members of German-American gymnastic clubs called Turnvereine. They promoted German culture, physical culture, and liberal politics. Turners were the leading sponsors of gymnastics as an American sport and the field of academic study.

In Germany, in the early 19th century when Germany was occupied by Napoleon, a major gymnastic movement was started by Turnvater ("father of gymnastics") and nationalist, Friedrich Ludwig Jahn. The Turnvereine ("gymnastic unions"; from German turnen meaning “to practice gymnastics,” and Verein meaning “club, union”) were not only athletic but also political. The origins of the movement were similar to other ethnocentric "national gymnastic" organizations in Europe. The men not only practiced gymnastic movements for physical fitness, but they were also participants in various national movements for independence. The Turner movement in Germany was generally liberal in nature, meaning they did not hold to the old doctrine of division of classes with the ruling, moneyed classes being superior to and controlling the working class. Many Turners took part in the Revolutions of 1848. Because of these revolutions failed, and its members and leaders were subject to arrest and imprisonment, many fled to other countries, primarily the United States.

Besides serving as physical education, social, political, and cultural organizations for German immigrants, Turners were also active in public education and labor movements. They gave German immigrants a way to assimilate into American culture and politics and allowed them to stay fit and healthy in an urban environment that did not always accommodate exercise. Turner clubs were leading promoters of gymnastics in the United States as a sport and as a school subject. 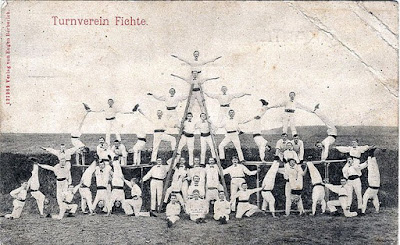 Germans throughout the United States, including the “Forty-Eighters”, tended to be strongly opposed to slavery. Many were Republicans for that reason. During the 1850s, when it became apparent that armed conflict might break out in the United States, many German-Americans used the Turner Halls as opportunities to meet, plan, and prepare. 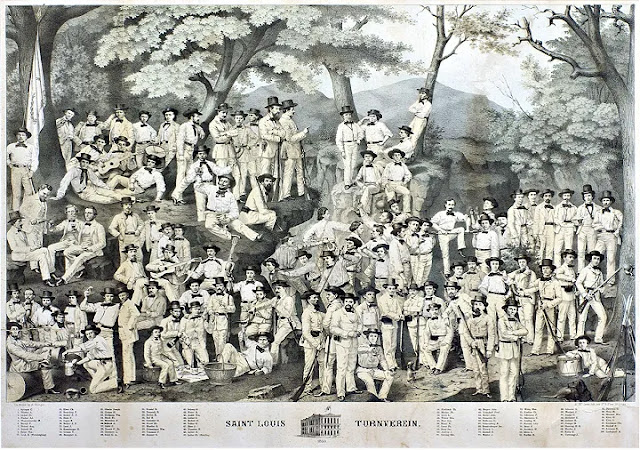 Robert J. Rombauer discussed the shooting club in his book The Union Cause in St. Louis in 1861: “Soon after the organization of the society a rifle section was formed with about fifty members, who were pledged to military obedience when in service; they elected their officers and instructors and bought their own rifles; took up regular weekly drills, arranged target practices and trial marches to neighboring cities.”


It was the men from this club that largely made up the German Brigade under In the Camp Jackson Affair when a large force of German volunteers helped prevent Confederate forces from seizing the government arsenal in St. Louis just prior to the beginning of the Civil War.

Nationwide, about 1000 Turners served as Union soldiers during the Civil War. Anti-slavery was a common element. Many Republican leaders in German communities were members. They provided the bodyguard at Abraham Lincoln's inauguration on March 4, 1861, and at his funeral in April 1865.

After the Civil War, the national organization took a new name, Nordamerikanischer Turnerbund, and supported German-language teaching in public high schools, as well as gymnastics. Women's auxiliaries were formed in the 1850s and 1860s. The high point in membership came in 1894, with 317 societies and about 40,000 adult male members, along with 25,000 children and 3000 women.

In St. Louis, there were two Turnvereine of note in the city, one on the north and one on the south.

The first Turner Hall was built at 1926 Salisbury on the North Side in the Hyde Park neighborhood during 1870.  Hyde Park was originally a German enclave called Bremen.  As it fell out of use, as many buildings in the north of St. Louis did, it eventually was demolished.

The second Turner Hall was built at 10th and Carroll Street on the South Side in the La Salle Park neighborhood during 1884. Although no longer used for gymnastics, it has never been vacant. Most recently, it was converted into condos. 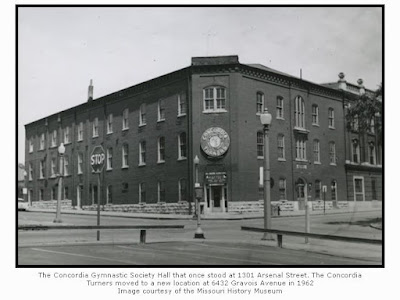 The Concordia Gymnastic Society was founded in 1875. It was named after Concordia Park on the near south side of Saint Louis. Facilities in the park were used for the initial activities of the organization. In 1877 Concordia moved to its first home located at 13th and Arsenal. 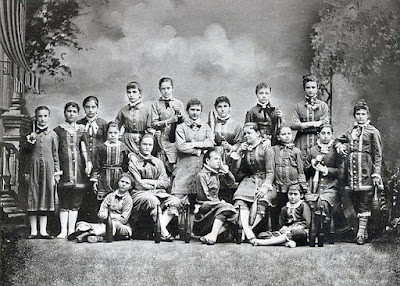 There was also a ladies' class of the German immigrant athletic society formed at the Concordia Turnverein. It was later called the Concordia Gymnastic Society.

In the United States, the Turner movement declined after 1900, and especially after 1917 when the United States entered World War I, at which time there was a violent backlash across the country against anything perceived to be German.

In my most recent book, Bee Sting Cake by Brunhilde, several of the earlier chapters take place in St. Louis, Missouri, where my hero Carl Becker, and his family live. At one point, he was asked why he had not been home for supper when a particular conversation took place. He responded that he was at the Turnvereine, like he usually was on a Monday night. Although he wistfully wished that the shooting club would start up again, probably at the time of the story in  1873, the Turnvereine once again focused on gymnastics, as well as political and social discussions.

Bee Sting Cake byBrunhilde has been released and is now available as an ebook, plus it is available at no additional cost with a Kindle Unlimited subscription. To find the book description purchase link, please CLICK HERE