Years ago, when I was in high school, I talked my mom into making taffy one cold winter day. She'd never made it before, but was game to try. Two of my nephews happened to be there, and after the candy cooled enough we could work with it, Mom told us to butter our hands, then we started pulling.
As we pulled, Mom added food coloring to the long ropes of sticky-sweetness. Unfortunately, she grabbed the black food coloring instead of blue, so the more we pulled, the more the candy looked like it had been mangled by dirty, grubby hands.
In spite of the gross gray color, it was good and we had such a wonderful time pulling the taffy.
I was thinking about that fun memory, and it made me wonder about the origins of taffy. 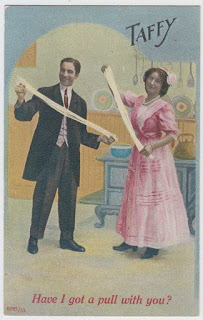 There are references as early as 1817 of  "a treacle thickened by boiling and made into hard cakes," the earliest form of taffy.
Throughout the 1800s, one of the most popular types of parties were called candy pulls, which involved buttering one's hands and pulling candy into long ropes. The parties were entertaining to young and old alike, and offered a suitable chaperoned pastime for courting couples.
The requirement for a good candy pull included a warm kitchen, copper pans, plenty of butter (for greasing hands), and a well-stocked supply of aprons and napkins. 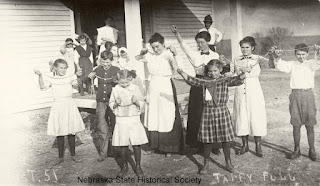 Candy pulls hit their height of popularity during the 1840s. The parties were considered a great way to entertain guests, or to celebrate special events, like birthdays.

To make the taffy, molasses candy was created by boiling the molasses, then spreading it in greased pans until it was cool to the touch. The candy was then pulled until it was a light yellow color. Once the color was achieved, the candy was cut into pieces, or shaped into ropes, braids, or sticks. It could even be cut with scissors into drop-like shapes.

In the 1870s, the name candy pull segued to taffy pull as even the wealthy got in on the fun. Taffy pulls became a social event attended by the fashionable as a source of amusement.

If you want to make your own taffy, I found a recipe that looks incredibly easy (although I haven't tested it!).

Butter a jelly roll pan and set aside.

In a heavy saucepan, heat milk, molasses, and salt. Stir and cook over low heat until a hard ball forms when tested in cold water. Spread mixture into prepared pan and cool until you can handle it. Butter hands and pull pieces into a long rope, working until color of taffy lightens. Cut into pieces. Works best pulling with a partner.

If you enjoy old-fashioned treats, events and parlor games, don't miss out on my Hardman Holidays series! 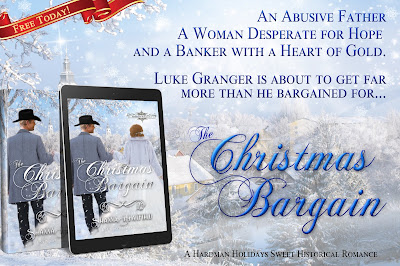 Today, you can download the first book, The Christmas Bargain, for free on Amazon!
Happy reading and Happy New Year!