What was the competition that disrupted Denver in 1900? Silver? Gold? The ski industry? No, none of those.
Streetcars! The fight was over who would control the demand for public trasportation. By that year, the city had more than 100,000 people living there. This made the town too long to cross on foot. People wanted streetcars like the cities in the East. 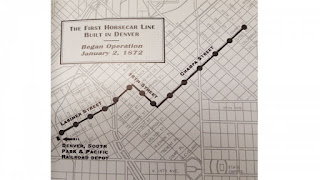 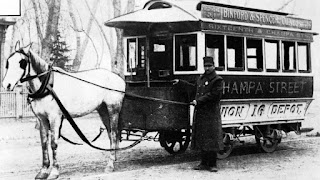 In 1872, the Denver Horse Railroad Company built the city's first transit line. Still, it covered very little of Denver.
By 1890, nearly every block in the downtown area were covered by a streetcar. The problem was that there was more than one company. These streetcar businesses competed fiercely, so fiercely that one company even tore up another's rails to build theirs in the same spot.
This comeptition also marked a huge change in streetcars. The horse was disappearing. The new vehicles were powered by steam as well as cable cars powered by sunken cables.
In the novella I recently finished writing, my hero purchases a livery in Denver. The heroine laments her perspecitve husband investing in a livery when horses were rapidly disappearing as a means of transportation in the city.

Few customers visited the business. The Denver Tramway Company provided a way to travel around the city on its streetcars. The fact made her wonder why D. R. Parkhurst would buy a nearly obsolete concern. Hadn’t he been to Denver or even visited the livery and asked to view the books before he purchased it? Maybe he bought it like he acquired a bride—sight unseen.

Maggie mulled over that question as the days lengthened into a week. She’d been there seven days without word from her supposed groom. The former owner, Roland Devers, was a silent and grim man. She sensed goodness and kind intentions in him. He simply didn’t bother with small talk or much talk at all, really. He shrugged when she asked about Mr. Parkhurst. At her question of whether Parkhurst came in person to buy the livery, he only shook his head from side to side and went back to his forge.

The brief response did give her an answer to the gnawing question. Yes, the man hadn’t bothered to ask for the books or even see the livery before purchasing it. Well, that gave her all the reason she needed to refuse him when he finally appeared. She wouldn’t marry such a careless businessman. ( from A Match for Maggie) 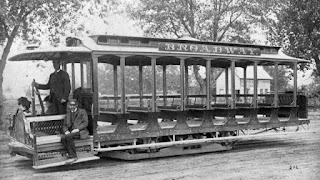 The Denver Tramway Company emerged early in the century as the sole streetcar business in Denver. The company's success peaked in 1910 before a new competition took much of its riders away--the automobile. 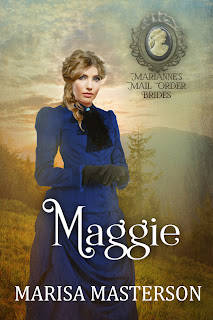 Maggie Jorgensen knows an escaped criminal is stalking her. U.S. marshal Reg Parker has a solution--send her to Denver as a mail-order bride.

After his passionate kiss, Maggie is confused. Why would Reg send her to another man? And why is her Denver groom missing?