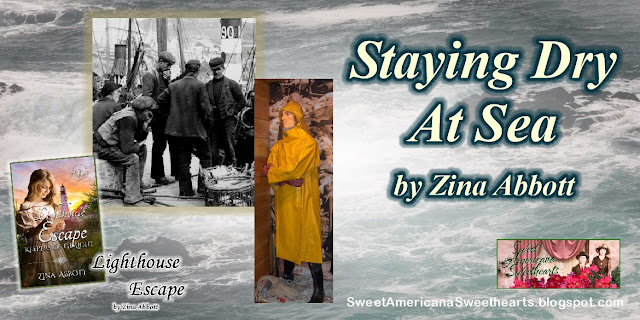 Once I started writing my book, Lighthouse Escape, I quickly realized I was no longer dealing with gold, silver, dirt, grass, horses, cows, buffalo, and cowboy gear. I was dealing with seamen. Whether the men worked on a river steamboat or one that plied the ocean, they were around water ― a lot. Not only was there water beneath them and river or ocean spray that blew up on them as they sailed and worked, there was often plenty of rain. Especially in the cooler climes, what did mariners in the nineteenth century wear to stay both warm and, hopefully, dry?

My first mental vision involved a yellow slicker with what is known as a Sou’wester hat. A little research revealed that the classic yellow oiled cloth neck to ankle coat and its accompanying hat with the back brim wider than the front was not developed until the end of the century. My book was set in 1881. 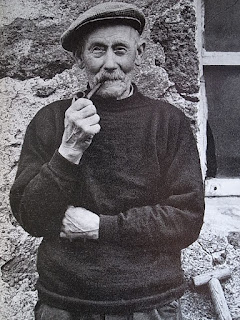 For starters, seamen in Ireland, Scotland, and other northern European countries have relied on wool clothing to keep them warm. An additional benefit was that the natural lanolin in the wool acted as a water repellent. Many fishermen and other seamen from colder climes wore heavy, tightly-knit pullover sweaters for that very reason. 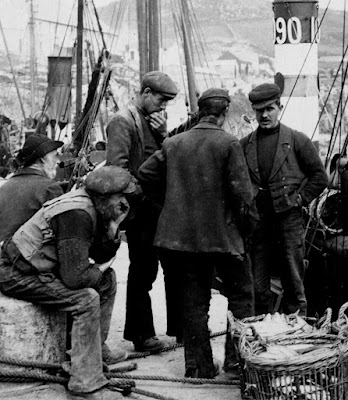 Waterproofed cloth garments were in use from the late 1700s. Various methods of waterproofing were used over the years. Seamen also relied on cotton clothing coated with melted wax. Early innovations for foul weather gear was to wear oil-treated cloth jackets which used resin or fat to repel the water and keep their woollen clothing dry underneath.

Some early Sou'Wester hats and rain capes were handmade of sailcloth waterproofed with a thin layer of tar. Traditional black or “tarred” Sou’Wester hats were developed in the 1800s. The tar was eventually replaced with linseed oil and lampblack.

Other methods involved canvas duck. Canvas duck, as opposed to regular canvas has threads that are more tightly woven. The term “duck” comes from the Dutch word for cloth, doek. This canvas was then coated with multiple applications of linseed oil and paint. These garments, although waterproof, were heavy and did not “breathe.” As dying processes became more available, many foul weather garments were made from yellow, orange, or red fabrics which stood out more should a man fall overboard.

Both of these methods of waterproofing. Although quite durable, did not possess the breathable qualities of the process developed by New Zealander, Edward Le Roy, in 1898. He used a mixture of linseed oil and wax to coat the fabric several times. Garments created using this process were called oilskins. 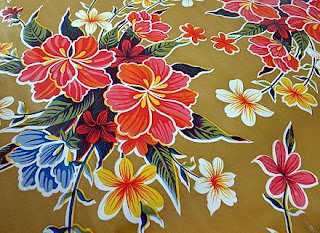 However, I know from reading numerous historical sources that oilcloths were made as early as the eighteenth century. Historically, pre-19th century, oilcloth was one of very few flexible, waterproof materials that were widely available. For some families, it was a home industry. Also known as enameled cloth or American cloth, its base was a close-woven cotton duck or linen fabric which was coated with boiled linseed oil to make it waterproof. The linseed oil was boiled with lead and manganese salts, known as metal salts. (Personally, now we better understand the toxic nature of lead, I’m grateful for my plastic tablecloths.) Sienna and umber pigments were used to create a cure more resistant to humidity.

With this understanding, in my story I referred to a oiled tablecloth my hero’s mother made into rain hats for her husband and sons who worked on the water. Here is an excerpt from Lighthouse Escape:

John next found his yellow oilcloth cap with its down-sloping brim attached around the crown. He shook it to snap it into shape.

John paused and his gaze met Jacko’s. “Before her death almost two years ago, yellow oilcloth hats from an old tablecloth were the last items my mother made with her Singer sewing machine. All four men in my family have one. Her belief was, people usually get injured or fall overboard in bad weather when fog and rain washes out the surrounding color. She decided that bright-colored hats would make us easier to spot.” Still holding the brim of the yellow hat in one hand, he pulled his watch cap snugly over his ears.

Jacko cocked his head and lifted a shoulder. “Makes sense.”

“Her other oilcloth tablecloth was yellow with red roses printed on it. We were grateful she did not sacrifice that one for her project.” John rolled his eyes and shook his head. “So, until the captain finds the lighthouse, we just follow the shoreline?”

“Not that easy. Due to it being high tide, there’s a cluster of reefs—mostly submerged rocks surrounding that spit of land that holds the lighthouse. Some of them barely show above the surface when the tide’s out and the water’s calm. When the waves get this high, they can do a disappearing act, only to show up when we’re on top of them. A few have bell buoys anchored to them, but sometimes it’s hard to hear them in a storm like this. Besides, it’s what you’ll find several feet below those rocks that we worry about most.”

“Sounds like a good place to avoid.” John donned his waterproof hat over his knit cap and tied the straps under his chin.

“Didn’t figure you’d be this prepared.”

“Rains on the river, too.” John pulled on his leather gloves.

To find the book description and link for Lighthouse Escape, please CLICK HERE.