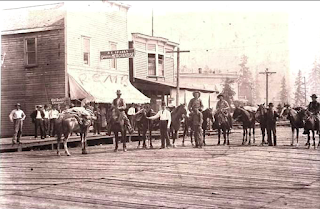 We don’t often think of writing about where we live. We love to write about history and the old west, but for this month’s blog, it occurred to me that I should write about my hometown of Estacada, Oregon. Not that I haven’t written a little about the area before. I’ve shared Philip Foster’s farm with you as it’s a wonderful historical site. But the old Estacada Park, located south of what was once the Estacada Hotel, was built to attract throngs of streetcar-riding city dwellers to what was considered an amusement resort in the mountain foothills. 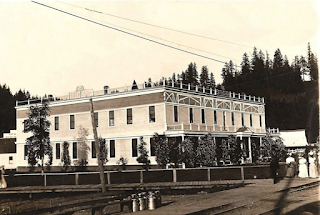 The Estacada and Cazadero train would leave from the east approach of the Morrison Bridge in Portland every two hours daily. The distance was 36 miles, and the entire ride gave folks an interesting and excellent idea of the Willamette Valley in the vicinity of Portland. People were whirled through a fine suburb and farm country with grain fields, orchards, stock pastures, berry farms, chicken ranches and stretches of forests. The paper described the line running to “new country” where the land is being cleared for new homes. 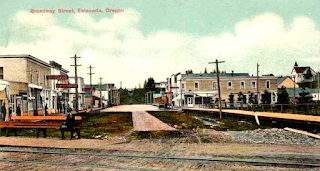 Estacada is a spanish word and it means staked out or marked with stakes. It was first suggested by George Kelly as a name for the town site at a meeting of the Oregon Water Power Townsite Company directors on December 27, 1903. Kelly had selected the name at random from a U.S. Map which showed Llano Estacado, in Texas. If Kelly’s suggestion had not been drawn from the hat, the town could have been named Rochester, Lowell or Lynn. The name Estacada is also used in Arizona. Having done a report on the history of Estacada back in high school, we found that some folks said the town was named for Esther Cada, the daughter of one of the more prominent citizens back in the day. Some of the older folks in town still say that’s how it got its name!

The Oregon Water Power Railway Co. began streetcar service from Sellwood to Estacada in 1905. In 1907, the name  changed to the Portland Railway Light and Power Co. Passenger service and continued until 1932. 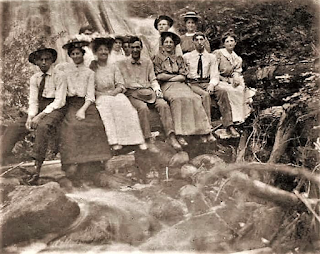 Other than the park and hotel that had its own restaurant, there was also a Confectionary and the Ice Cream Store along with a grocery, the First State Bank and various other businesses. Some of the buildings are still there today including many original houses and churches. When doing my history report, one of the things that stood out was the number of saloons in the tiny hamlet. Fourteen! And that was back in the early 1900s. Today the population of Estacada is about 3600. That was a lot of watering holes for one tiny little town. But as it was considered a tourist spot, I can see the amount.

Maybe one day I’ll use Estacada as a setting for a book. Quite a few movies and television shows have been shot around here including Kevin Costner’s The Postman, The Librarians, (I remember when Jonathan Frakes of Star Trek the Next Generation was in town directing and gave a special talk at the library. That was in 2015 as I recall), Without a Paddle, Extraordinary Measures, Behind the Mask, and currently, an Amazon production.  There are parking lots full of trailers, movie equipment and catering trucks. Just another day in town ...