Up until I did research for a Halloween scene in an upcoming book, I never knew that the perennial holiday wasn't always so scary. In fact, it was once less about fright and more about flirtation and romance. Romance?!  How did I live all these years without knowing this? 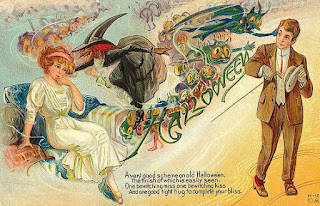 More than one hundred fifty years ago, rituals and superstitions about Halloween celebrations emphasized love. Newspaper reports from states and territories in the mid-19th and early 20th century recommended parlor games and traditions that promised to reveal romantic fortunes, with many offering a peek at what the future held.

"Halloween in the early 20th century had far less emphasis on blood, gore, and scary monsters, and much more emphasis on courtship, romance, and the opportunity for love. In fact, the image of Cupid was often interspersed among the more familiar black cats, witches, and jack-o-lanterns."

Games of Love
As in modern times, apples played an important role in many Halloween romantic traditions. One game, Snap Apple, challenged guests to use only their teeth to bite an apple suspended from the ceiling by a string. The first to succeed would be the first to marry. But modern Americans may be more familiar with a similar activity...bobbing for apples!

Oddly, cabbages also figured in the world of Halloween romance. A news story from Ironton, Montana in 1888 noted, "just what occult power a cabbage possesses is not known. Yet, it is found that these innocuous cruciferous plants have a rough time of it at Halloween". The article went on to describe a Halloween pastime where a young woman would pull up a cabbage. If copious amounts of earth came up with the roots, she took it as a sign that she would be married to a wealthy man with a year! 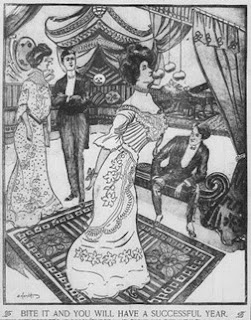 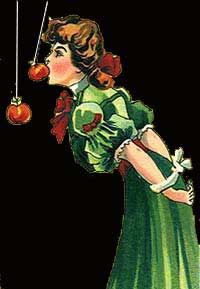 Accounts of a Halloween ball, gatherings with cards and dancing, or a "candy" pull in which party guests competed to grab apples or candy suspended from the ceiling with their teeth would show who would have a successful year. A Los Angeles newspaper printed an account of mirror gazing, burning of chestnuts, and carrying the candle. Most of these activities involved young women attempting to divine their future husbands or arranged marriages. 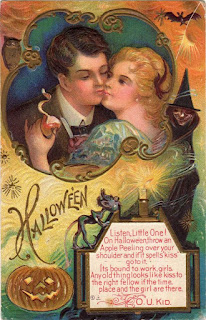 Another old custom called for cutting a long strip of apple skin and tossing it over one's shoulder. The shape of the peel was said to resemble the first initial of a suitor.

In 1905, at a party in New York's East Side Settlement House, young women blew out lines of candles, with the idea that the flames that remained lit signified the number of years she'd remain "unhitched". 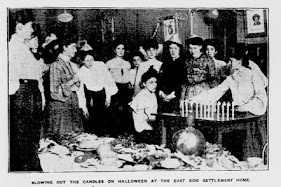 Another party game involved a young woman throwing a ball of yarn out the window, watching it unroll while repeating the Lord's Prayer, at which she would then be rewarded by the sight of her future husband.

An article featured in a Philadelphia newspaper called for a participant to walk backward in bright moonlight while staring into a hand mirror and reciting a chant. If done correctly, the face of his or her future spouse would materialize in the mirror. 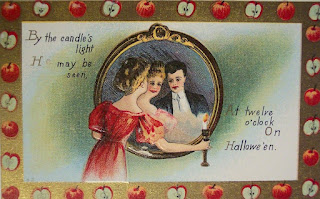 Another game involved burying a ring, a dime, and a thimble in mashed potatoes. The food was then served to guests at a party. The guest who received the ring would marry in the near future; the one who received a thimble would remain a spinster or bachelor; and the guest who got the dime would reap riches and fame.

By far, the most common Halloween premonition involved nuts or chestnuts. In the Arizona Territory, young women were encouraged to build a "ghost fire" to find out who they were destined to wed. Chestnuts thrown into the fire would pop, and the girl's whose chestnut popped first would see her future husband's face rise up from the flames. A variation on this custom stated that a man and a woman would place two nuts in the stove. If the man's jumped or cracked, he would prove fickle, but if the two nuts "cuddled up to each and burned brightly", the couple would marry and live happily ever after. 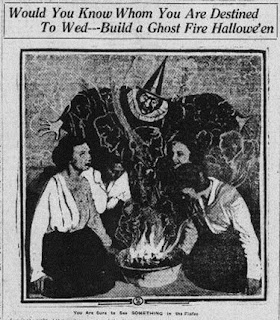 Another superstition featured a walnut tree. According to a 1914 article in the Evening Public Ledger in Philadelphia, the rules were rather clear. On a moonlit Halloween night, circle the tree three times while chanting "Let him that is to be my true love bring me some walnuts."  Following the chant, the participant would see his or her future spouse picking walnuts in the tree.
Though romantic, these Halloween customs began to fade and lose their appeal to the public by the 1920s.
Women, the traditional party hosts and targets of such games, were becoming more confident in their roles both in society, at work, and at home. About the same time, a figure emerged in popular lore: the powerful witch. And unlike commercial depictions, she was alluring.
As Mr. Gifford noted:
"The beautiful witch possessed power and beauty...she could use both to make her own decisions about...the future of her love life."
Like the strong heroines we create, and the women of today, the witch needed no fortune-telling skills; she would create her own destiny.
Marrying the Major 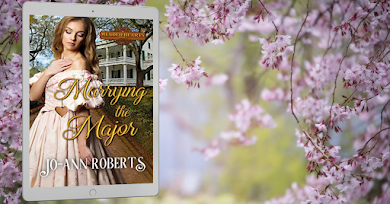 The War Between the States has ended…but for Kit and Will their battle had just begun.

As the daughter of a prominent judge and well-bred mother whose roots could be traced back to before the War of Independence, Katherine Lambert had been the belle of Adams Mill. Her upbringing her schooling and her privileged world had revolved around the latest fashions, picnics, parties, and a host of beaus and friends.

She was expected to raise children; not her voice.

Until she defied her family and the Rebel cause by doing the unthinkable...falling in love with a Union cavalry officer.

The moment the very elegant very beautiful Katherine Lambert turned around to look at U.S. Major William Chandler was the moment she marched off with his heart. Though he always planned to carve out his own destiny, to marry and raise a family, he never expected love to find him in a small Southern town

Encountering opposition at every turn, he remains undaunted, determined to court and marry Kit and see who took serious objection.

They'd hoped their love would mend and heal the wounds of a splintered family, but someone else had other ideas.