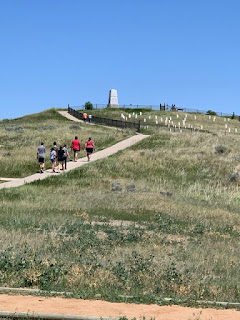 Hi, Kit Morgan here and today I want to tell you about a road trip my daughter and I took to a book signing in Deadwood, South Dakota. As I write westerns, this was going to be great! It was so much more.

Yes, there was everything that goes with a road trip, but the further we went, the more fascinated I became. One of the stops we made was at the site of The Battle of the Little Big Horn. The Lakota and Plains Indians refer to it as the Battle of the Greasy Grass. I grew up knowing it as Custer's Last Stand.

My daughter, however, was dismayed to discover it happened on her birthday. The battle took place June 25-26 in 1876 between the combined forces of the Northern Cheyenne, Lakota, and Arapaho tribes and 7th Calvary Regiment of the United States Army. They fought near the Little Big Horn River in the Crow Indian Reservation located in southeastern Montana. It was a bloody battle which resulted in the defeat of U.S. forces.

This resulted in a huge victory for the Lakota, Norther Cheyenne and Arapaho tribes. They were brought to victory by several famous leaders such as Crazy Horse and and Cheif Gall. Both were inspired by some visions Sitting Bull had. 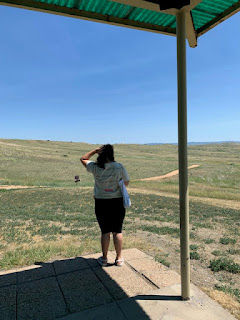 Of course it's one thing to read about the battle in history books or when we were in school, quite another to be on the ground where it was fought. The rolling landscape of southeastern Montana with its long golden grass was something to see. Imagining the battle in your head, something else. 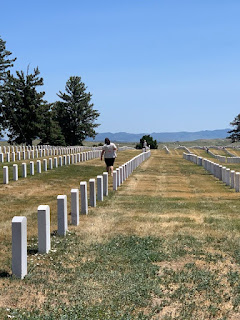 We didn't take the drive to the smaller battle that was also taking place at the same time a few miles away. The fact the land was so open and what with the geography the way it was, we could imagine the area. However, the experience of being there in person was sobering. Visiting such an historic site makes me want to travel to others. Maybe we'll take another road trip next summer and allow more time to see some. I'd like to re-visit The Battle of the Little Big Horn and travel to the other battle site. There were trails here and there and I would have liked to have had more time to read some of the headstones. The place is a huge veterans cemetery now with soldiers from not only the Battle of the Little Big Horn, but all the way up to WW II. 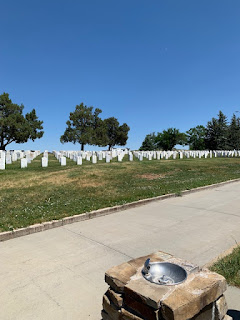 Have you done much traveling to historic sites of the old west this summer? Do you plan to?