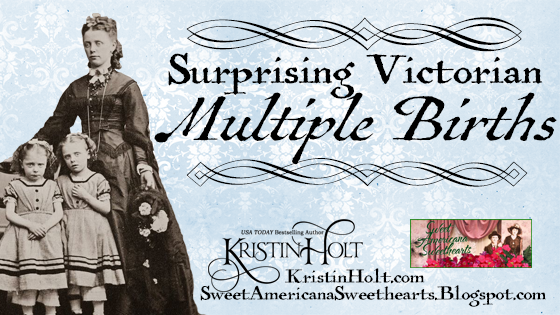 Today's curious are tantalized by the rarity of multiple births. We love stories of families doubling in size with surprise triplets on the heels of a long-awaited adoption. Multiples are thrilling, perhaps due to the novelty.

Victorians were just as enamored with multiple bundles of joy. This following tale from an 1888 newspaper uses words like "astonished," "pleased," and without a label, 'generous.' Note the astonished shopkeeper felt the need to make a generous gift to this highly surprising family.

Have you ever heard of twelve sets of twins, born to the same mother? (Sound like a tall tale?) 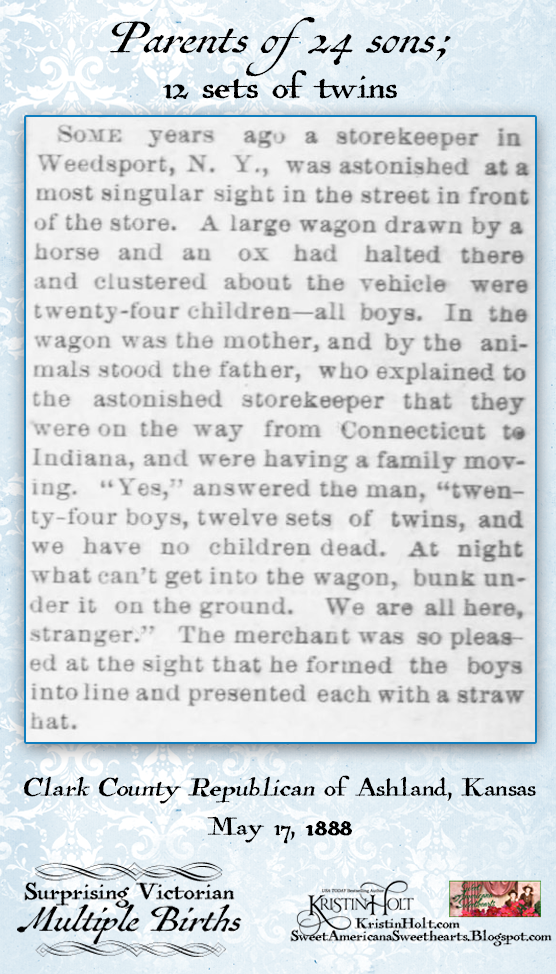 I love this vintage cabinet card of a young mother holding her beautiful twins on her lap. By her costume and hairstyle, she's obviously a Victorian. Note the custom throughout the nineteenth century of dressing baby boys and girls alike in long white gowns. The twins might be fraternal (including one boy and one girl), yet they might well be identical--boys or girls.

The following snippet of news claims a woman named "Maddalena Granata, of Nocera, Italy, has had fifty-two children, including triplets fifteen times." 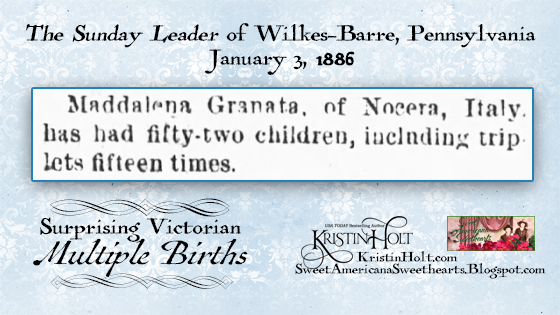 Tall tale? Nope. Maddalena Granata (born 1839) is listed, with 52 children, as fifth-highest recorded birth count worldwide. Wikipedia lists people with the most children... at least 20 each. This page does clarify (thank goodness) that numbers in bold and italics (Maddalena has both) "are likely to be legendary or inexact, some of them having been recorded before the 19th century." Okay... but Maddalena's story was the nineteenth century. The above announcement was made when Maddalena was about forty-seven. Likely done with her childbearing years, but zero guarantees. Especially for the uber fruitful. Guinness World Records 2010 (p. 111) concurs, "... the record for the most triplets is 15 sets, by Maddalena Granata (Italy, 1839-1886).

The old labor-and-delivery nurse in me can't help but notice that this poor Mrs. Granata died at age 47--the same year this announcement showed up in the States. No mention of her passing, just her amazing count of fifty-two children, including fifteen sets of triplets. I'm just going to take a wild guess here at the cause of Maddalena Granata's death...

There you have it. Fascinating stuff, these surprising stories of multiple births in America's Victorian past.

I'm equally surprised to see triplets, born in 1856, all lived to adulthood. That's a doubly big surprise. First of all, a high percentage of infants died due to childhood infectious diseases, illness, and accidents. If a child lived past age five, they'd have a greater probability of living to adulthood. Even today, the neonatal mortality rate of multiples is saddening.
So this mid-nineteenth century success story is heartwarming! 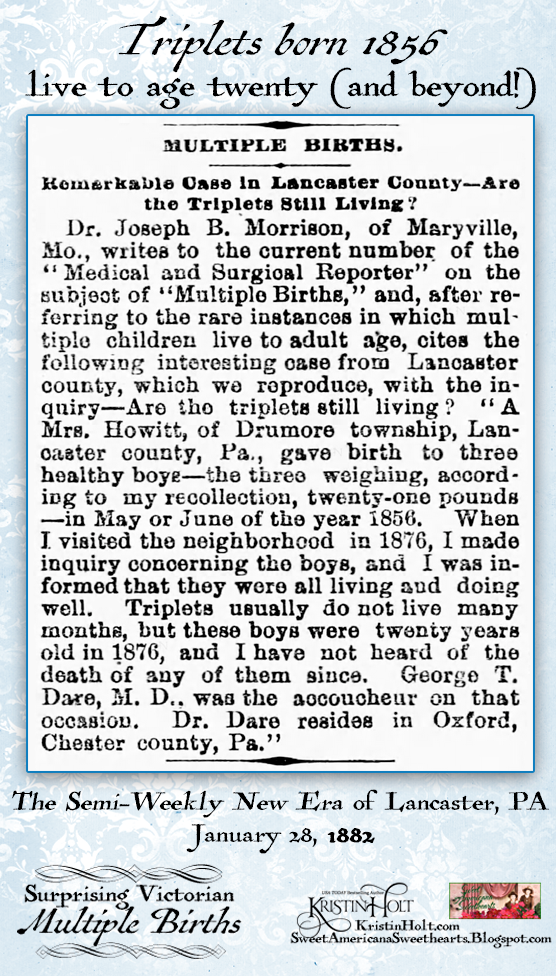 Today, most cases of quadruplets arise through fertility treatments and IVF. Yes, some women and their partners are simply very fertile.

The following image shares the interesting Victorian story of an unnamed "female" delivered of four perfect and healthy children (two male, two female) by Mr. A. Borman, surgeon accoucheur. Congratulations, 1849, for giving the doctor all the credit. 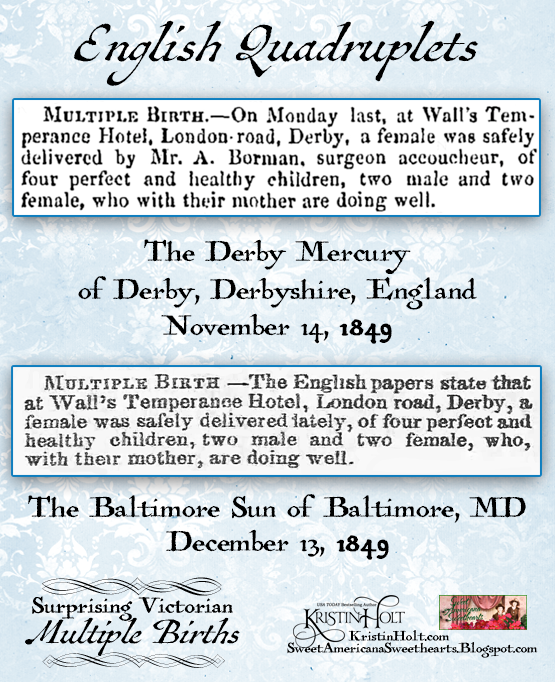 Isn't it cool that the unnamed mother and her quadruplets made the news in the States? This sample from The Baltimore Sun wasn't the only instance of this joyful story voiced in the 1849 papers throughout the United States.

Father of Forty-One (and 200 grandchildren)

Another example comes from a Connecticut town, Killingly, where a man named Levi Bradshaw lived in the Sparks district.  This man, who'd been married three times (from age 13 on), had 41 children, 40 of whom were living in 1896. 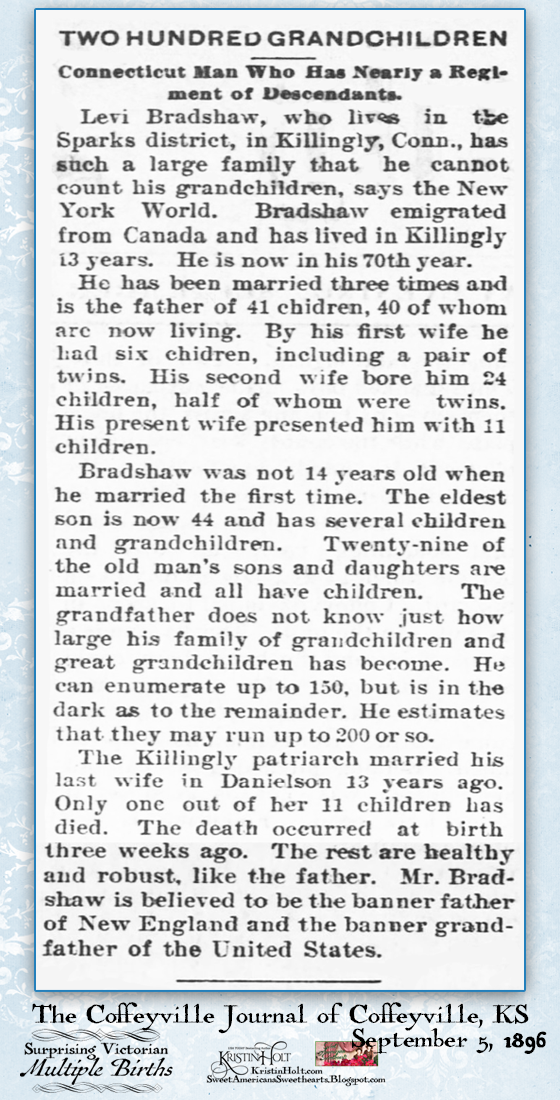 Father of 41 (with only five living)

In a comparable story, another father credited with forty-one offspring by a series of three wives, illustrates the devastating death rates in nineteenth century America.

See the original digitized image, below. For ease in reading, I've provided a careful transcription:

--John Hepner, a German, now a resident of Reading, Pennsylvania, has lived to be called the father of more children than probably any other man in the country. He is sixty years old and has had three wives. He was first married in Germany in 1840, and his wife died in 1848. In that short time she bore him seventeen children--two pairs of twins, four sets of triplets, and one at a single birth.--Mr. Hepner married again in less than a year. He was married in the latter part of June, 1849, and in February another child was born to him, followed by a second on the following Christmas. After that his wife bore him twins five consecutive times, and three children at a single birth, making fifteen children in nine years, at the end of which time his second wife died. His two marriages covered a period of seventeen years, and yielded him thirty-two children. He had come to this country three years before the death of his second wife. He was married again shortly afterward, this time to a widow with one child. This wife is still living, and has borne Hepner nine children. Of the first set of children none are now living, and only two of the second and three of the third.

OTHERS with Multiple Multiples!

Bradshaws and Hepners (their stories related, above), were far from alone in the Multiple Multiples hall of fame. This story, credited to Honesdale, Pennsylvania, tells of a Mrs. Cullen traveling by train with her eleven children to join her husband. So far, not remarkable. Until we see the punch line: this woman's eleven children range in age from three years of age to nine years of age.

What woman could travel alone with eleven little ones? Luckily, the railroad was so enamored of her brood (and substantiated story) that they gave her half-price fare for all twelve in her party. 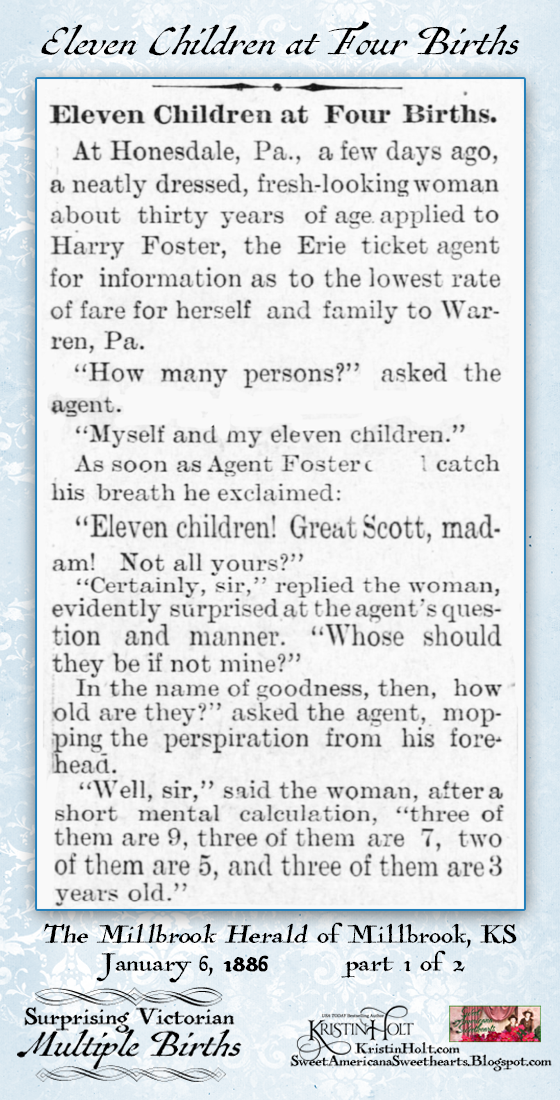 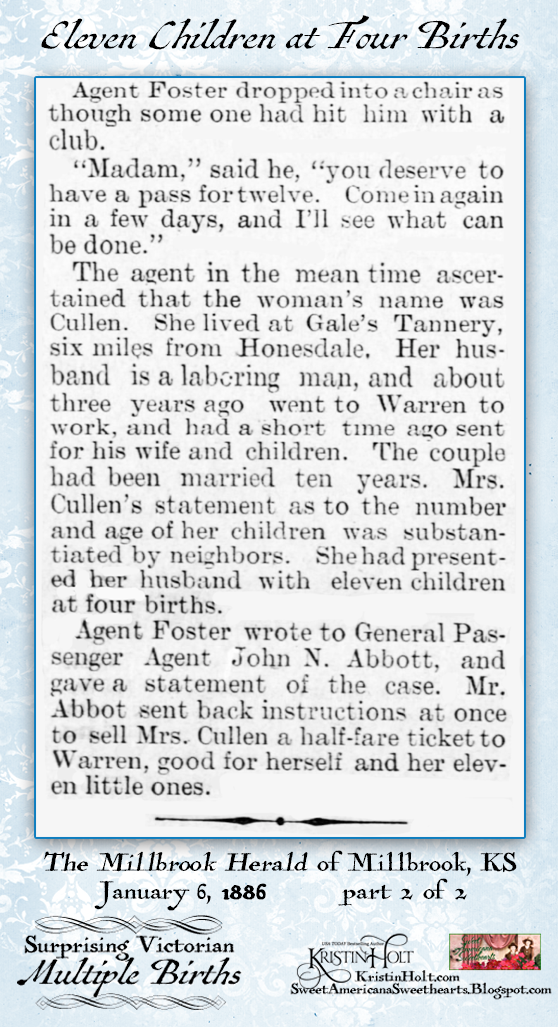 See what I mean about Victorians as enamored with "multiples" (especially multiple multiples)?

An Extraordinary Family Line with Many Multiples

Let's add to the Cullens, the Bradshaws, and the Hepners. This next Victorian-American story is of "Mrs. Ellsworth Miller, who holds the world's record in the matter of multiple child bearing." The extraordinary woman had just presented her husband with triplets when the article was printed in 1893.

It seems the "world record" owned by Mrs. Miller didn't take into account some of the more fecund parents noted herein.

The newborn triplets brought the count to three sets of triplets and a total of sixteen children. Tragically, the Cold Spring, NY Special (syndicated) report discloses only seven of her children are living, including the newborn triplets. 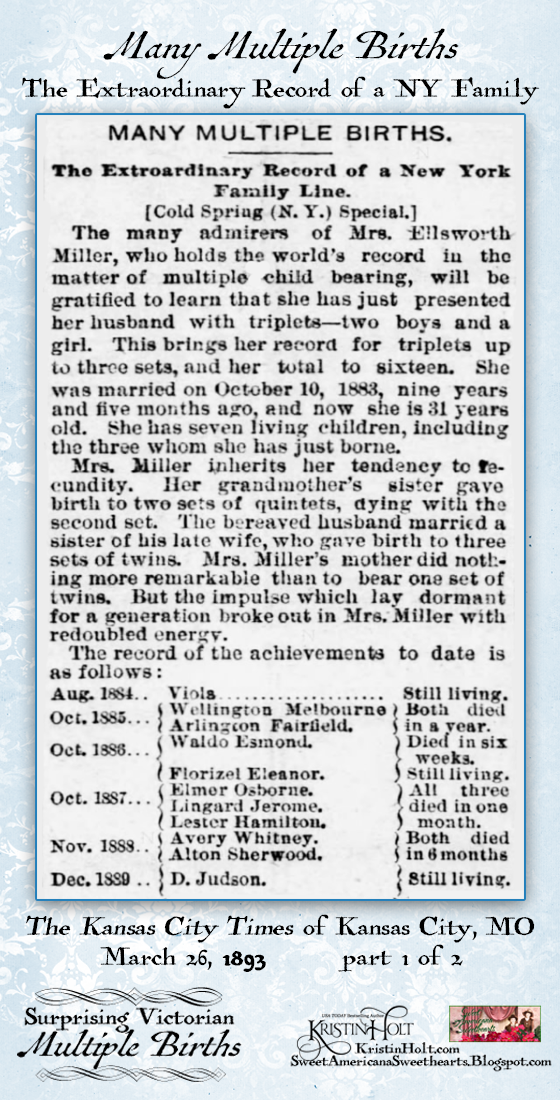 Notice the family lineage and how every branch of Mrs. Miller's tree bore exceedingly well. Perhaps most heartbreaking of all, the report of the infants' names and staggering rate of mortality. Too many of those sweet babies "died in a year," "died in six weeks," "all three died in one month," "both died in 6 months," "died in eleven days," and occasionally, a "still living" report. 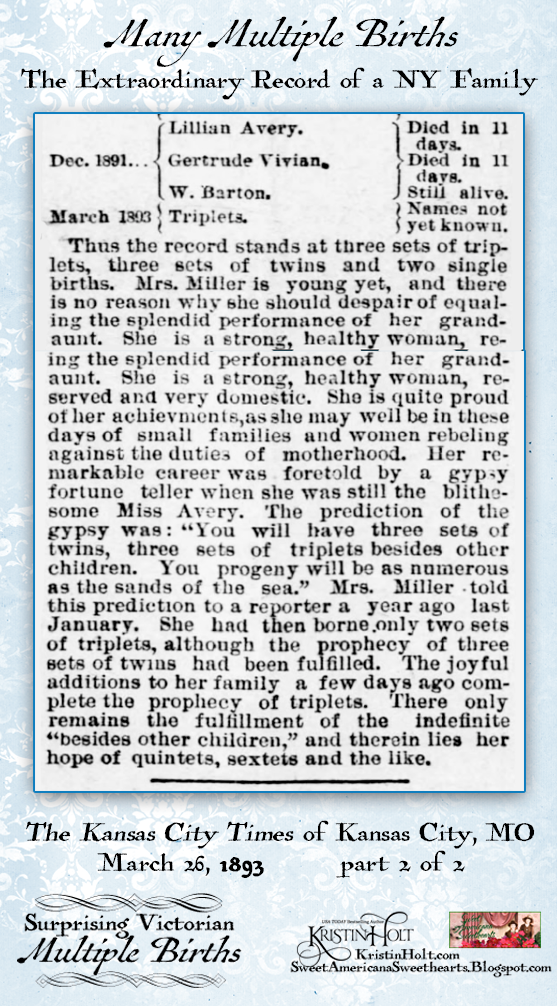 I'm fascinated by the development of scientific understanding throughout the nineteenth century. Medicine gained vast understanding in so many areas, from the Germ Theory to genetics and everything between.

... it seems to be highly probable that multiple births were more common among those who married early and early in life bore children

... a woman had been married upwards of 19 years before she had a child, and then she had triplets

But the statistics are pretty clear: with an increase in the mother's age, the rate of multiple births rises exponentially. Still true today. 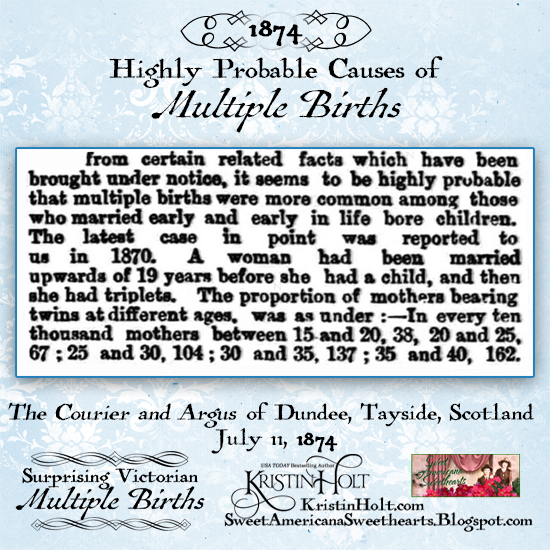 In 1895, the "famous Scandinavian scientist" Dr. Drejer reported his findings: "multiple births are highest among Slavonic people and lowest in the Latin races." (Noted: Dr. Drejer's statement is one of several bits of data steeped in nineteenth century racism.) Today we cringe when viewed through our 21st century lens; in the 1890s, a representation of the standard views of the times. 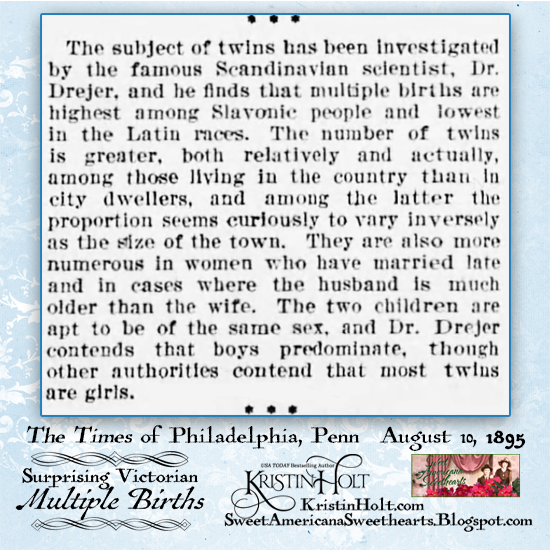 Let's return to Victorian scientific explanation of multiple births--because this one is fascinating. Who knew that an 1896 statement would go farther than with Mrs. Miller's "the whole family has multiples" to state, unequivocally, "Twins Were Hereditary." 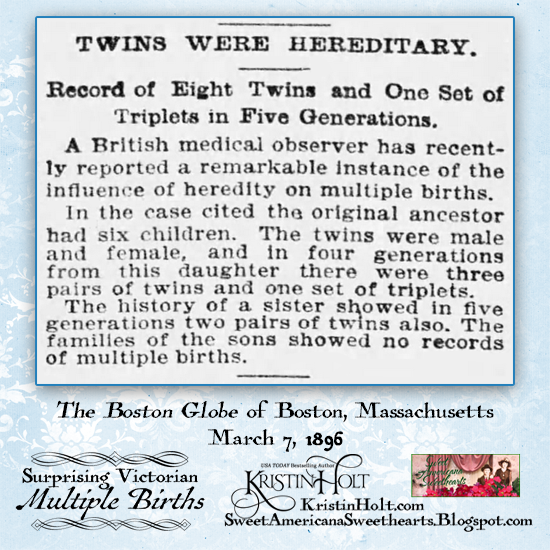 The following snippet of "news," stating that multiple births were reported in 1.17 per cent of all cases appeared in dozens and dozens of newspapers across the country. A prime example of reprints--a very common practice of the times. 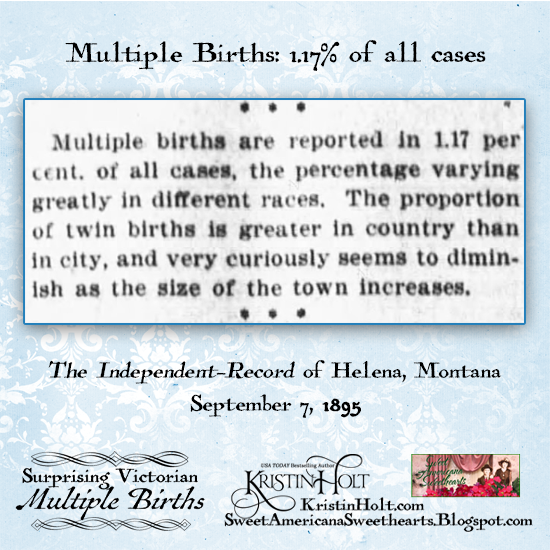 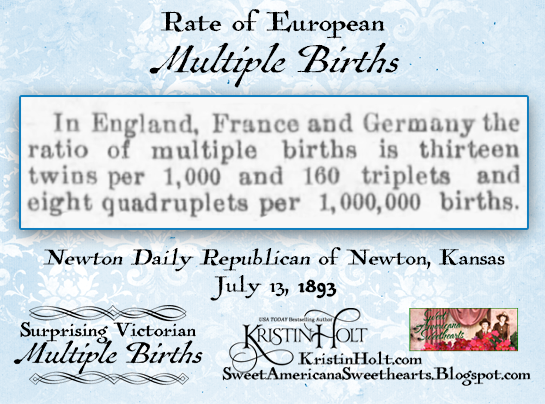 Interestingly enough, the National Center for Health Statistics says the twin birth rate is 32.1 per 1,000 live births. (Source: Centers for Disease Control and Prevention) Science says the frequency of multiples has increased 70% since 1980. Wow.

What comes to mind as you read these Victorian-era newspaper clips about multiple births? Are you surprised?

Do you have family stories of twins or triplets born in the nineteenth century? What efforts did the parents make to help the children (often premature) survive?

Please scroll down and comment! Your thoughts are welcome. 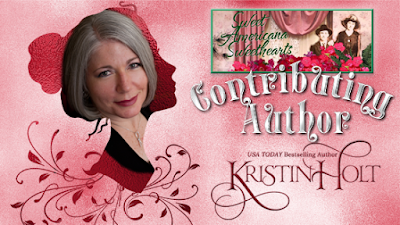 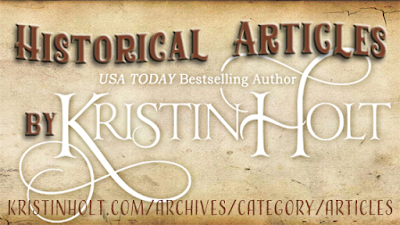