My current work in progress is set in late 1914. The other day, I was doing some research as I wrote a scene with the hero packing his lunch in the wee hours of the dawn.
Because I get so attached to my characters, I was thinking, "poor guy. Can't even take a thermos of hot coffee with him."
Or could he?
So I looked into the history of the insulated thermos. 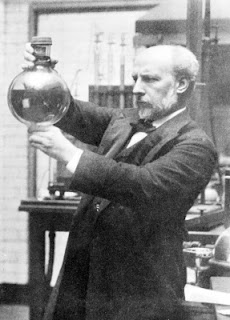 Scottish scientist Sir James Dewar invented the first vacuum flask in 1892. Though his cryogenics work, he saw a need to keep a chemical placed in a flask at a stable temperature. Dewar placed a glass bottle inside a larger glass bottle, then sucked the air out from between the two bottle walls. As he did this, he created a partial vacuum to keep the temperature of the contents stable.
He hired a professional glass blower to make a sturdier flask which led to the manufacture of the Dewar Flask in 1898.
Dewar's glass blower, Reinhold Burger, and his business partner, Albert Aschenbrenner created scientific glass devices. While producing Dewar's flasks, they created a vacuum flask with a protective metal casing and secured a patent for it (something Dewar failed to do).
The two business partners hosted a competition to name the bottle in 1904. A local resident submitted the word Thermos, derived from the Greek word thérme which means to heat.
In 1906, American businessman William B. Walker met Burger while traveling to Berlin. When he learned about the Thermos bottle, he realized the potential marketing in the United States. He made plans to import it, obtained the necessary patent rights, and began raising funds to open a manufacturing plant.
Walker founded The American Thermos Bottle Company in Portland Maine on January 31, 1907. A factory was leased in Brooklyn, NY. Walker imported machinery and German glass blowers to train workers on the proper manufacturing techniques with Burger supervising the process.
Soon, Thermos was being praised around the world for its design. It won the grand prize award at the Alaska-Yukon-Pacific Exposition in 1909 and continued to be honored at seven additional world expositions.
Thermos Limited, located in England, produced the first machine-made glass filler, which became a huge breakthrough for speeding production. In automating the process, Thermos became a world leader in glass vacuum technology and manufacturing.
Long before public relations became such a big business, Thermos worked hard to keep their brand in front of the eyes of the world.
They produced a series of clever postcards in 1910. 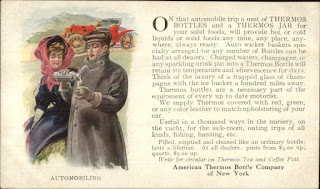 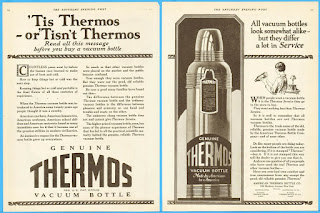 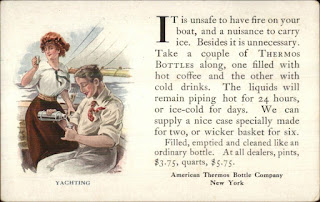 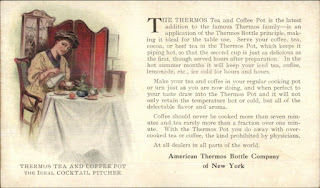 In 1912, the craze for Thermos bottles surpassed anything Walker had anticipated. Plans for a new site began and citizens of Norwich, CT, eager for the business it would bring to their city, helped raise funds to buy the land and build a factory. 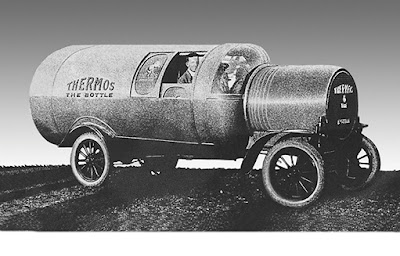 The company even had a Thermos bottle car they drove around to generate publicity. The car appeared in a World War I victory parade.
In 1925, the company merged with the Icy-Hot Bottle Co of Cincinnati, also established in the early 1900s. The combined company became known as The American Thermos Bottle Company.
During World War II, the Thermos pint bottle and the workmen's lunch kit were granted the highest civilian priority rates, requiring facilities to keep up with the demand. More than 98 percent of what the factories produced during the war years were pint bottles, special bottles designed for military use, or bottles used in atomic energy laboratories.
Their lunch kits received improvements in the 1950s. In 1953, they issued the first full lithographed steel lunch box with the image of Roy Rogers, selling more than 2 million units in the first year.
They introduced a partnership with Mattel™ in 1962, offering the first Barbie™ lunch box and Thermos bottle. 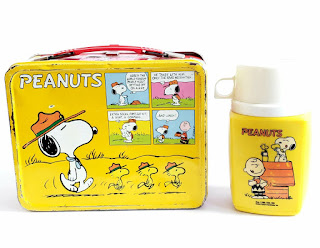 I remember my sister had a Snoopy™ lunch box and thermos quite similar to this one.
To celebrate 100 years of Thermos® products, a gala was hosted at the Smithsonian Museum of American History  in 2004 with a retrospective display titled "Taking America to Lunch," a historical glance at vacuum bottle and lunch kits from the 1880s-1980s. 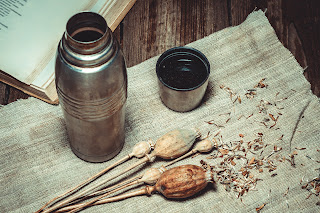 So the very long answer to my research question was that yes, my hero could have taken along a thermos full of hot coffee to warm him on a cold December day.