Greetings Cards Through the Ages

During December, millions of extra envelopes pour into the United States Postal Service in the form of greeting cards bearing holiday wishes to friends and family. Years ago, I sat at a computer terminal in an encoding center and input information from an image on the screen to create a bar code label so the mail that was rejected by the optical scanner could be directed to its destination. Many hours of overtime were mandated in December to handle the increased volume. Even knowing that fact, I still send cards each year—I just make sure not to use colored or metallic pens that bleed and I’m extra careful with getting the address correct.

While plotting a Christmas novella, I researched the history of greeting cards. Interpreting the term loosely, the tradition can be traced to ancient Chinese who wrote New Year’s wishes and Egyptians who used papyrus to send greetings. In the 1400s, evidence exists of people in Europe making cards, especially for Valentine’s Day, and exchanging with friends. In the first part of the 1800s, Valentine’s Day cards were affordable and became popular. The first Christmas card is documented as being created in London in 1843. Sir Henry Cole hired artist John Calcott Horsley to create a card that Cole send to his friends.

In the US in 1849, Esther Howland became the first publisher/creator of Valentine’s cards. Her father owned a book and stationery store. Her mother wrote The New England Economical Housekeeper and Family Receipt Book, which was published in 1844 by her father’s company. At age 19, Esther received a Valentine’s card (which at the time had to be imported from England and were expensive). She determined a market existed in America and she convinced her father to order the supplies. Once she made several sample cards, she convinced her salesman brother to add the samples to the stationery wares for his regular route. Hoping for orders totaling $200, she was elated when her brother returned with pre-orders of $5,000. 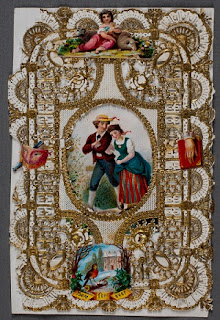 Her company was born. Esther hired local women and started an assembly-line business in a spare bedroom in the family’s house. Esther designed and constructed the original and the employees copied her design. As the business developed, she also hired women who worked at home. A box of all the needed materials arrived at the woman’s home, and a week later a courier picked up the finished product. She incorporated as The New England Valentine Company in 1870 and was known as The Mother of the American Valentine. Her cards featured lace, hidden doors, ribbons, and gilded illustrations. Later designs included an interior envelope that might hold a lock of hair, secret message, or even an engagement ring. Over the years, the business moved to a factory-type location and she expanded the product line to include other holidays. Eventually the business grew to sales of $100,000 per year. 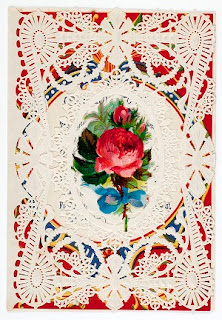 In 1856, Louis Prang opened a lithographic business in Boston and created the first Christmas cards in the US. In fact, the Greeting Card Association’s highest annual award is called the LOUIE.

In 1879, Esther published a thirty-one page book of verses that provided alternatives to what came on the original card.

That fact gave me the idea that the verses had to come from someone. My heroine, Fiona, was one of those authors who penned sentimental sayings for a greeting card company. By the time of the story 1883, Esther’s company had been bought out, and several companies were in the business of providing greeting cards to the American public. 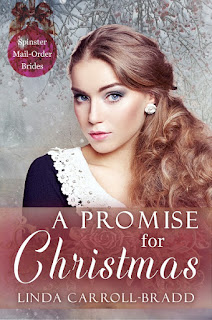 BLURB for A Promise For Christmas, book 29 in Spinster Mail-Order Brides multi-author series:

After a decade serving as a governess for a wealthy Chicago family, lively Fiona Carthage is ousted from her job and their house. She turns to the Matrimonial News and responds to an ad from a Colorado storeowner. Anson Lorentz, a man who prizes routine and a quiet life, sees the happiness a mail-order bride brought his friend and takes a chance on bringing a bride to Gunnison City. Fiona works to make his house into a real home. Her arrival sets his household upside down, which causes friction for this new couple.

Will Anson stand by his promise to provide Fiona a secure home, or will his newly discovered family ties sway his allegiance?

One name will be chosen from those who leave a comment to win a copy of A Vow for Christmas, book 7 in the Spinster Mail-Order Brides multi-author series.

I’m participating in N.N. Light’s Christmas and Holiday Book Festival. Learn about holiday titles in daily spotlights and enter for a chance to win one of five possible Amazon or Barnes and Noble gift cards. This title is featured on December 31, the last day of the festival.

To keep apprised of my latest releases, please join my newsletter list here.

Posted by Linda Carroll-Bradd at 1:00 AM