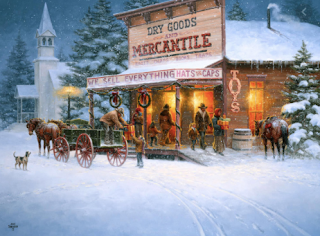 Back in the Old West, the cowboy celebrated Christmas just like we do. Well, maybe with a few exceptions. Still, Santa Claus was part of their life as were giving presents, decorating (depending on where they were. Who knows what they might have done to some cactus at Christmas?) and of course, a Christmas dinner. Of course, life on the prairie meant a harsher environment than what we're used to. There were blizzards and harsh winds. And it wasn't like a cowboy could run to the mall to take care of his Christmas shopping either, even if he could get there. But despite all of that, the spirit of Christmas was alive and well among the pioneers and cowboys of the time. 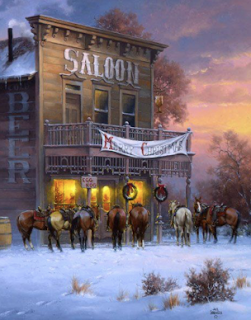 Women baked for the holidays (though they did some things weeks in advance) just like we do.But instead of modern-day favorites, they made things like plum pudding, put up fruit and vegetable preserves,  and meat. When it came to decorations they made their own out of whatever they could find. Evergreen and pinecones, berries and nuts. The decorations for the Christmas tree were homemade too. They made cookie dough ornaments like gingerbread men and strung popcorn and cranberries. They also used yarn and ribbon along with strings of paper.

When it came to gifts, dolls could be made from corn husks. Other toys were carved from wood. One could make a pillow, or embroider something special. Sachets were also made and all gifts were of course made with plenty of love. 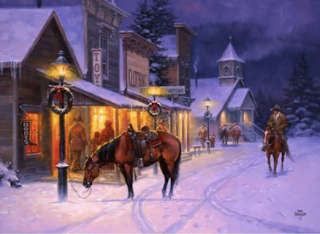 A journal called St. Nicholas was available to children in the old west. Published from the early 1800's until the 1940s, the magazine was designed for children in remote and isolated areas and had around 500 pages of stories, contests, games, and crafts. Parents loved it as it kept their children entertained through the long winter months.

So this Christmas, as different as it may be for many of us, think about the cowboy and how he spent his.