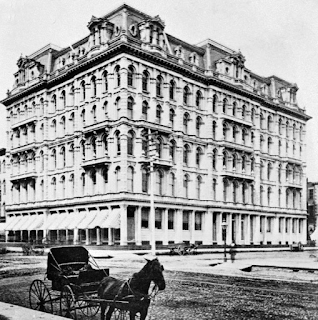 The building was grand. Opened in 1868, it towered at six stories on Chicago's State Street. Locals nicknamed it the Marble Place because the front was covered completely in marble. For all its grandeur on that October day in 1871, the Field, Leiter & Company store was in trouble.

Ultimately, the company would become known as Marshall Field's. Today it no longer exists since Macy's bought out the chain fifteen years ago. But, in the nineteenth century, it was the premier department store in Chicago.

That day in October, 1871, company officials learned of a terrible blaze headed their way, literally devouring the city. One of the partners, Leiter, owned a house out of the fire's path, and he was determined to save the costly inventory by moving it to his home. 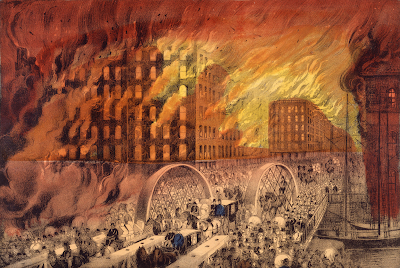 How could he do it in time? That involved building a fire in the store.

One of the wonderful things about this tall store was the elevators. An employee raced to the basement and broke up wooden crates to built a fire in the huge boiler. As soon as the elevators were working, employees hustled out goods as well as the company's records to waiting horse-drawn wagons. 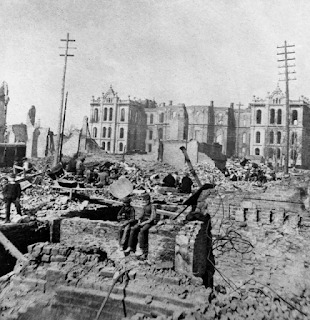 They worked all night--loyal employees who wanted to save the company so they'd have a job after the fire destroyed the city. At the moment the last employee exited the lovely marble-faced store, flames shot out each window. The Great Chicago Fire had reached the Marble Palace and consumed it.

The fire totally destroyed the store. Those employees who'd worked tirelessly had saved so much inventory that it was able to repoen in few weeks in a temporary location. Of course, the company rebuilt and went on to be a favorite store in the city for decades. 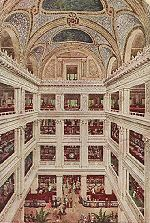 The Marble Palace plays an early role in my newest novel. Still being written, the novel features a teacher headed west to be both wife and educator. She stops in Chicago and visits this store. What she leaves with is unbelievable! You'll have to wait a while to find out more...

Check out www.marisamasterson.com for information on all of my latest books. 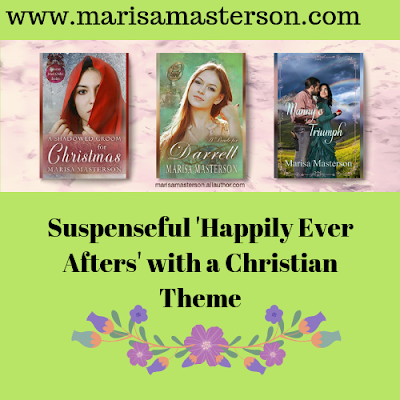