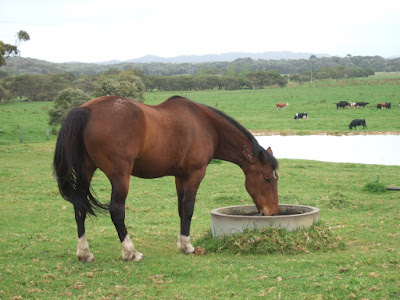 The day is hot and dry, and you're a cowboy riding your horse for the last hour or so, and know you have several more hours ahead of you. As you reach a stream, you lead your horse to it and offer it a drink. It denies it. You take off the bridle, as some horses are offended of the thought of drinking with a bit in his mouth, but still, the horse won't take the drink offered him. You pick up a handful of water and spread it over the horse's lips, hoping it will entice him, but no, he's still not interested.

When a horse isn't thirsty, it may refuse to take a drink, no matter what you do to encourage it.

As a horse owner, it's a frustrating prospect. You know what's ahead of the horse in his day. You know that this might be the last opportunity for the horse to get a drink for a few hours, but he doesn't know that. All he knows is that he's not interested in taking a drink right now.

The frustration of trying to make things better for a horse because of foresight but still having the horse refuse your help is what prompted this saying when it originated in the early 12th century. Today, however, it's used to describe people. A person who you try your best to help, but just won't take your helping hand is like leading a non-thirsty horse to water.

For example - A doctor can tell a person all about the diet and exercise program that can help them lose weight, but if the person doesn't take the advice and put it into action, it's like leading a horse to water...

Do you ever hear anyone using these phrases? Used it yourself? Let me know in a comment!