PHOTOGRAPHS TO THE RESCUE (How one photographer created tourism for a town.) by MARISA MASTERSON

Imagine it. A small town sitting on a river, occasionally overrun by loggers. It has the only railroad bridge across the Wisconsin River, it's only reason for existing. To my way of thinking, this place should have disappeared once the railroad stopped running and the logging industry quit floating logs down the river.

The town, Wisconsin Dells, is still going strong. In fact, last month my husband and I made our yearly trip to the spot. There, we took the free tour through the photography studio that saved the town and made The Dells a tourist destination. 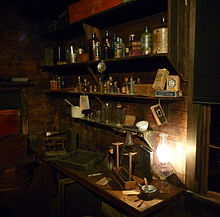 In 1865, Henry Bennett set up a photography studio in Kilbourne City, Wisconsin. The man had to do something to earn a living. His gun backfired, badly wounding him during the Civil War. This made it impossible to return to his job as a carpenter. 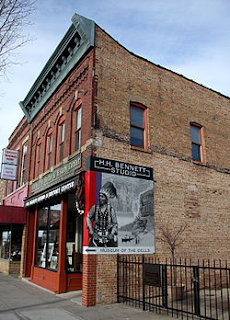 He quickly found that there wasn’t a demand for portraits. Not enough people in the area. There were, however, incredible rock formations and a lot of activity on the Wisconsin River so he headed there with his equipment. Bennett even created a portable darkroom that went with him. 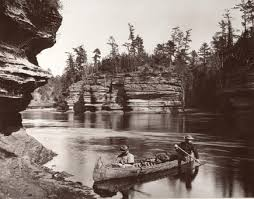 Those photos became cabinet cards and cards for a stereopticon. The photos became well known across the country. Tourism became an industry in the town as people flocked to the Dells. At the time, the town was called Kilbourne City. By the 1930s, the name was changed to reflect what the people really came to see.

Bennett’s studio went on to be one of the oldest still operating in the United States. He invented many items in the field, even built his own cameras (except for the lenses). His photographs so impressed people, I believe, because he invented the stop-action shutter. It allowed him to freeze motion in the picture, like this one with the man jumping from rock to rock. 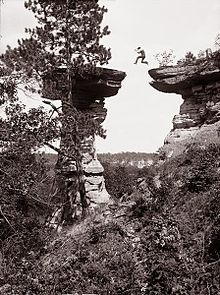 The beauty of the landscape, the strange and unique photos, the activity on the river. It all added up to fame for Bennett and continued life for this small town that typically hosts four million visitors each year.

While at The Dells, my husband and son explored. As for me, I wrote much of my next book. It's set in Kilbourne City, soon after the town is established.

Alice Cordell is done with isolation. After being shut away to nurse her dying father, she wants to find a community that needs her and will accept her, limp and all. To that end, she trains as a nurse, graduating with the school's first class. The future seems bright until she realizes she's once again being forced into isolation, cut off from her new community of Kilbourne City, Wisconsin
No one could blame Niall MacKenzie for growling at the woman. After all he’d caught her staring into his home through a back window. Worse yet, only minutes later she told him she was his caretaker. He already hates most people in Kilbourne City, Wisconsin after the bitter lie the community accepts about him. Her insistence that he start doctoring those locals shouldn't endear her to him..
Soon he has a fragile nurse to both watch over and resist. A woman that calls to him more as a man than a doctor. As for Alice, the surprise waiting for her will lead to an unwanted marriage and a rivalry that threatens her only hope for a career and a home.
Posted by Sheila M at 3:16 AM