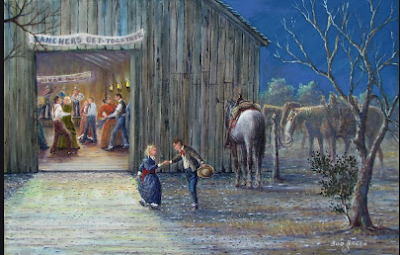 Hi, Kit Morgan here, and today I'd like to talk about good old fashion barn dances.

Back in the day barn dances were, you guessed it, held in the barn. Nowadays they are held in a more suitable building but still call the barn dance. The music was made up of traditional or folk music of the day and the dances often a mix of dances brought to the country by immigrants And modified over the years. The barn dances themselves were often family-oriented or community-oriented events. Sometimes they were organized and held to raise money. Or in some cases to raise the barn itself.

Because so many cultures brought their traditions with them when they came to America, it wasn't 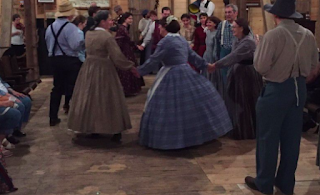 unusual for a little Scottish or Irish dancing to show up at a barn dance. Square dancing, English country dance, and contra dancing were also common. When it comes to the old West, the cowboy waltz was invented. In fact, with all these different dances and traditions mixed up, "a caller" emerged from the chaos. This person called out steps so that everybody was doing the same thing instead of dancing willy-nilly. 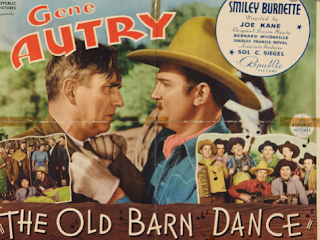 Dances of course were social affairs where relationships were sometimes formed. Ah, The stuff of romance! The barn dance was a popular setting for stories and later movies. Gene Autry started one such film. A delight to his fans and moviegoers alike. Barn dances are still held today, but as mentioned above, not many are held in an actual barn. Though it's darn fun when they are! I only have one book where dance is held in a barn. One would think with all the books I've written, I'd have more. This makes me think I better add a barn dance into another one soon!

So if you ever get a chance to attend one, do. I think you'll have a lot of fun, meet some new people, and maybe even go home and watch her movie containing a barn dance.

Until next time,
Kit
Posted by Author Kit Morgan at 2:00 AM