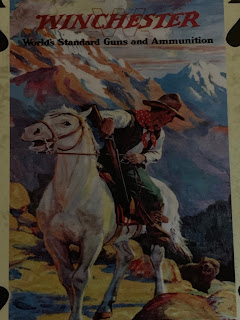 Hi! Kit Morgan here and today I want to share with you some wonderful artwork I discovered through a pack of playing cards. Yep, you heard right. Playing cards.

In case you didn't know, Winchesters were some of the earliest repeating rifles. One of the most successful came along in 1873. It was even marketed as "The Gun that Won the West."

The Winchester model of 1876, also known as the Centennial Model, earned a reputation as a durable and powerful hunting rifle. Even Teddy Rosevelt had one. The Canadian Northwest Mounted Police used the 76 as a standard long arm for many years. The Mountie-model '76 carbine was issued to the 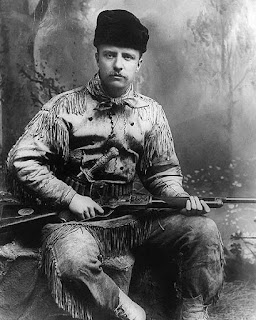 Texas Rangers. Teddy Rosevelt used an engraved, pistol-grip half-magazine 76 and loved using it for his early hunting expeditions in the West. A '76 was also found in the hands of Geronimo after his surrender in 1886.

In 2013 Winchester brought back the model 1873. This marked the third of the classic Winchester models to be reintroduced, the previous models being the 1892 and 1894 models.


The name Winchester isn't only associated with repeating rifles. Sarah Winchester inherited 20.5 million dollars in 1881 when her husband, William Wirt Winchester, died of tuberculosis. The Winchester Mystery House as it's called, was her personal residence. 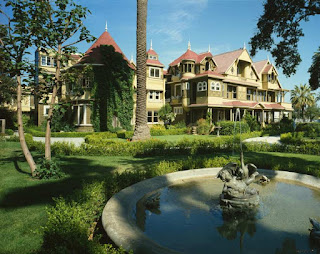 Since its construction in 1884, many have claimed that the mansion is haunted by the ghosts of those killed by Winchester rifles. I don't know about that part, but having visited the mansion myself, I can say that its creepy. At least to me.

Workers were kept busy "round the clock" as some say. Without interruption. By the same token, Mrs. Winchester was known to stop a lot of the construction for months at a time so she could rest as she saw fit. Who wants to live in a house with all that hammering and sawing going on day in and day out? At least this is what her biographer says.  Of course, there are still many who claim the work went on non-stop for thirty-eight years until Sarah Winchester died. At which time all construction stopped.

Below are more of the playing cards I came across with Winchester adverts on them! Enjoy! 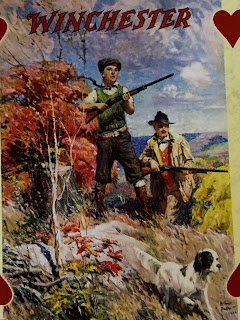 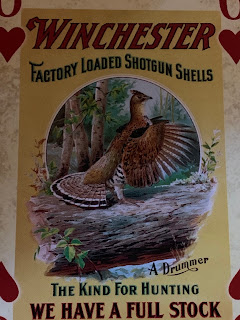 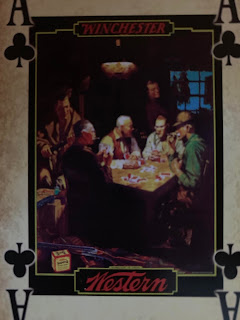 If you'd like to check out my books, you can find them on my amazon page.  Until next time, happy reading!