Just in Time for Christmas

Mail order brides were a real thing in the nineteenth century. Though the romances we write and read today are embellished or refined to add true love and happy endings, those who love true love and happy endings are happy to get those things in a mail order bride story. Stories of the actual experiences of some mail order brides back in the day aren't new to most of us who love western history. We've heard the sad tales of cheating and lying and women left to find their own way in places that were vastly different than what they knew.

Rather than retelling some of the stories of what happened to the women who went west for a husband, I'm thinking about the women who chose to become mail order brides. The women who answered ads were adventurers, dreamers, or desperate souls looking for a way out of bad situations.

What woman in her right mind would leave the comforts of a big eastern city and head through the wilderness to unknown people and circumstances? The adventurers and dreamers would do just that. A woman in an abusive or poor situation would choose to leave the first chance they got at what they hoped was a happier life. What better option did some of them have? Did the opportunity to create a new life turn a desperate woman into a dreamer? In the right setting, I don't see how it could be avoided.

Christmas is a happy time for even the poorest. A time of celebration of faith and salvation. A time of forgiveness and fresh starts. Christmas can be a milestone or a target in a timeline. It's hard to know sometimes if a mail order bride was running to her future or away from a path she didn't want to be on.

In my Christmas story, Running to Christmas, Rose Bailey had her eye on Christmas. All she could think of was leaving the Whitney home where she was a servant. She couldn't stand the thought of spending another holiday in their employ. She had a plan. She was a dreamer who was intent on making her dreams come true. She was running from servitude, but she was also running to a happy future she knew was waiting for her in another place.

If I had known that my first Christmas without Thomas or Father would be anything like this…
Her lower lip trembled, and she squeezed her palms together. Not now. They wouldn’t want to know that you spend most nights crying. Besides, what will you do if Mr. Whitney catches you crying?
There was a sharp knock on the door and Rose twisted on the hard wooden chair in front of the rickety vanity that had been shoved against the wall. Her breath caught in her throat as the door pushed open and Mr. Whitney cast his dark-eyed gaze on her.
“Miss Bailey.”
Rose flattened her palms against her thighs and sat up straight, “Yes, sir?”
“I didn’t appreciate how long you spent in the parlor after you served lunch. Now, if you were an ordinary servant, I’d see how you feel about sleeping near the front door, where the draft is.” He smirked and said, “Like a dog.”
I wouldn’t put it past to him to think of the poor as dogs. Mr. Whitney had been wealthy his entire life, he was a descendant of one of the travelers that had come to America nearly a hundred years before. Mr. Whitney had made it clear that were a few things that bothered him more than the poor and new money, which may as well have been poor, to him.
Rose nodded, her neck stiffened, and her mouth went dry. “What will my punishment be, sir?” She knew enough by now to go ahead and ask in advance as this normally lessened the punishment at least a little bit.
He pretended to consider this for a moment and said, “You’re aware that Christmas is in just two months, correct?”
Her lips were smoothed into a thin line as he went on, “Nicholas would like some expensive things. We’ll be making sure that we can provide those for him. I’ll be cutting your weekly wages in half from now till Christmas Eve. How does that sound?”
Fire burned in her belly and she felt like she was going to be sick, right in front of Mr. Whitney. She’d been planning on purchasing a carriage ride to her visit her father and brother’s graves. Now that outing would be impossible.
Mr. Whitney’s eyes flew across her face before she said, “That sounds fair, sir.”
She lowered her eyes to the floor and the floorboards creaked as Mr. Whitney stepped backward, and into the hallway.
“I believe it sounds more than fair, Miss Bailey. Indeed, I am a generous man.”
The door slammed shut and her shoulders began to tremble before his hard footsteps had even moved halfway down the hall.
Tears raced down her cheeks as she slipped off of the chair in front of the vanity and moved over to the bed. Why is he like this?
There was a rumor that years ago, Rose’s father had stolen her mother right from under Whitney’s nose, and he hadn’t forgotten about it. She remembered rolling her eyes when Miss Wilson had broached this to her shortly before she made her way to the carriage that waited to take her to Mr. Whitney’s extravagant home.
She crept into bed, with her petticoats still on, and covered her face with her open palms.
Please Lord, if You see fit, please don’t make me spend Christmas in this place with these people.  I just don’t think I can bear it.
~~~~~ 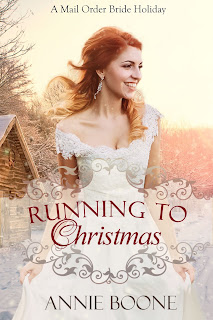 Find Running to Christmas on Amazon. It's available in Kindle Unlimited if you prefer to read with your subscription.