I want to let the readers of this blog know: I'm celebrating my birth month with a gift to one person who comments on this blog, or any of the others I've written between June 15, and July 1, 2018.
There will also be one major winner chosen from the comments on all the blogs post for this time frame.
Today advertising is pretty ubiquitous. We see in everywhere. How do you stand out in the crowd?  Was it any different back before 1900? A look at some of the old Colorado newspapers may give a hint of the way people got the word out about what they had to offer.

Take these advertisements from the Aspen Tribune in 1898 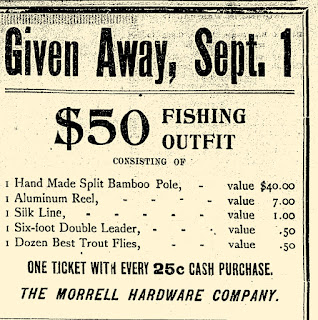 The description of the fishing outfit fascinates me. A split bamboo pole, aluminum reel and silk line. Now that's a fishing pole. 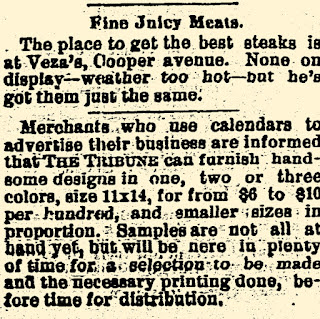 Do any of these sound familiar? Can you imagine it being too hot in Aspen at 8,000 feet? Makes you wonder what the rest of Colorado's weather was like that year.

I love this advertisement from Colorado Springs in the late 1800s on the sale of Shirt Waist. What was interesting, the business, Hibbards, was a staple in Colorado Springs from 1892-1996 and was one of the last independent department stores in the area.

Then there is Mrs. R. Eslick who opened a photo gallery in Julesburg, Colorado in 1898. Photography was not just a man's job. There were more than a few women who took up the business of photography. Julesburg was once known as the wickedest city in the West, according to the towns website. For more information on Julesburg Click Here 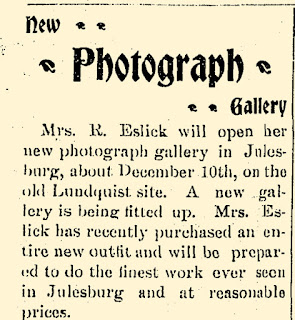 Of course we mustn't forget the physicians. These three appeared in the Central City, Colorado newspaper in 1873. Colorado had a plethora of physicians when it was just a territory, then even more as the population grew and it became a state. Early on Colorado was not only known for the wealth that was in the ground, but the clear, dry air that aided many in recovering from various illnesses. 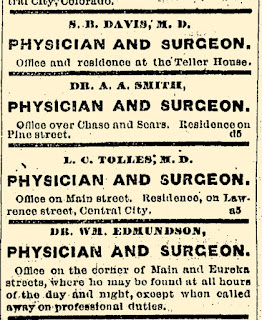 And these in the Rico, CO. newspaper in 1882. Located in the southwestern part of Colorado in Delores County, you can read more of the towns history Here 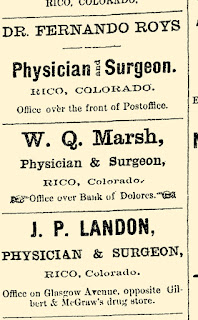 Now we don't want to forget having fun. Here are two pieces from the Opera House in Julesburg, Colorado in 1898. So many towns had their opera houses. They were the place to not only see shows, but also traveling variety acts.

So as you can see, marketing is still marketing no matter what the year. Sometimes I think the best way to get a feel for a town I am writing about, or using as a template is to read and study the advertisements in their papers. Now that so many are available online, it is so much fun to read.

I will leave you with an ad from the Sierra Journal in 1883, the newspaper for Rosita, Colorado that Helen Hunt Jackson used as the setting for her children's story "Nellie's Silver Mine". Helen visited Rosita many times and loved the beauty of the area, which shows in her use of the town and surrounding area in the book. 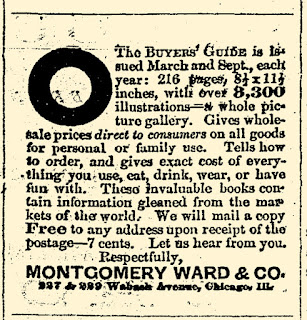 Until next time, have a wonderful beginning of summer. Enjoy the stories the Sweet Americana Sweethearts have to offer, and have fun. And of course I must advertise my latest story in the Lockets and Lace series that was released early this year. If you haven't read this series, it's great way to spend summer afternoons in the hammock, sipping tea...ahhh!