Iroquois Beadwork in Art and Dress 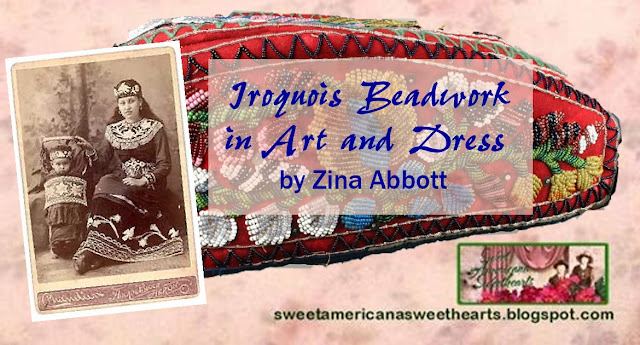 In the bright sunlight, glass beads probably appeared to sparkle like magic to the native 16th century Haudenosaunee, what most know as Iroquois Indians. Prior to the introduction of glass beads, the Indians made beads out of bone, antler, stone, shell, quills, and pottery shards. Women used beads to decorate clothing, including moccasins and baby carriers as well as clothing.

From the time of first contact of Europeans and the indigenous people of North America, and largely through the work of well-meaning missionaries, a slow process of acculturation began to undermine the spiritual foundations of the Northeast woodland people. Conflicts from King Philip's War to the American Revolution facilitated the work of the missions, destroying not only the Indians' ancestral ties to the land, but their economic base as well, forever altering the lives and arts of these indigenous people.


But it was in the early 17th century when the Haudenosaunee world and the Western world began to interact that the tastes of Iroquoian mothers, aunties and grandmothers turned to what we know today as raised Iroquoian style beadwork. 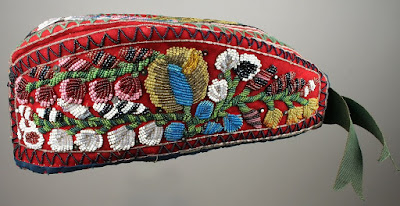 The indigenous women loved the delicate look of the English lace the women wore. While they could not acquire things like lace or the materials to create it – they had liberal access to white glass beads via the trade network and learned to use these delicate beads on dark backgrounds to replicate the look of lace.

The end of the Revolutionary War and beginning of the 18th centry saw the beginning of two events that would affect the Northeast—tourism and, especially in Paris, fashion. 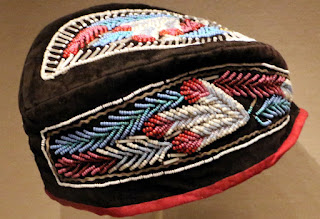 The traditional ways of sustaining disappeared with the coming of the Europeans. Indian women, wisely assessed what they could do to appeal to this encroaching white population in order to support their families. They used their skills with beadwork to make items to trade and sell. It allowed them to display their technical skills and artistic vision to incorporate symbols and motifs that represented the sacred relationship of the natural world. They shared this beauty with others around the globe. 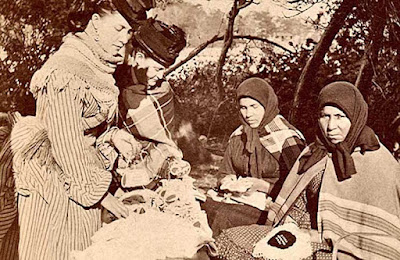 Even in the 19th century through to today, Iroquois women, and a few men, continue to produce beautiful pieces of Iroquois beadwork. Although beadworkers live on all of the reservations, the majority live on the Tuscarora Reservation near Niagara Falls and on the Kahnawake reserve near Montreal. Often they use patterns passed down from their 19th century ancestors.


The back of the stereo card says “Group of Indian Women at Bead Work. Scene on Goat Island, Niagara.”

“Goat Island during the summer season is much frequented by vendors of souvenirs of the Falls, for few can pay a visit her without carrying away some little article of curiosity as a remembrance thereof; hence those who keep shop “under the shade of the greenwood tree,” drive a considerable and profitable trade. Amongst them the Indian women are conspicuous, as seated on the sward they curiously contrive purses, pincushions, needle-books, slippers, caps, and other numerous articles in elegant bead work, which for beauty of design and neatness of execution is unsurpassed. In the neighbourhood of Niagara in times past, ere the white face set foot upon their territory were the hunting grounds, of the Seneca Indians, and it is the remnant of this scattered tribe that gains a subsistence by the manufacture and sale of fancy articles upon the ground where at one time the tribe held undisputed sway. About four miles from Niagara, is a small Indian village, where the old laws and customs of this people are still observed to a limited extent, the inhabitants electing their chief and looking up to him as the patriarch of the flock.”
You may find Zina Abbott's books on her Amazon Author Page by CLICKING HERE.