Have you ever met someone you were drawn to and later realized they were different in some way? It's happened to me more than once.

In college I had a friend who had lost his thumb. I'd known him all semester and never noticed. Then one day I saw him in the cafeteria and he reached out his hand to shake mine. It was the hand without a thumb. I wasn't expecting him to not have a thumb and I jumped back just a little. I felt so bad about showing my surprise. He didn't react at that time, but we did talk about it some time later. He said he was so used to people being surprised that he rarely even noticed it. I didn't ask how it happened and still don't know his story, but I remember being amazed at his ability to not be affected when others might have a less than polite reaction.

The story that's so close to my heart is of  a friend from high school who had a deep scar beside her chin. She was very conscious of it and usually covered it with a hand or kept her head turned away. Funny, when I met her I didn't notice the scar. It was only later when I noticed her hand on her face that I realized what she was trying to cover up. I never asked her how she'd gotten it because it seemed like such a difficulty for her and I didn't want to upset her.

I saw her twenty years after we graduated, at a reunion of course, and it was so wonderful to reconnect. It turned out she'd moved away from our hometown, too, and we now lived only a few miles apart. Over lunch a few months later, she confided about how upsetting the scar had been during her fragile teenage years.

She'd grown to accept it as an adult mainly because of how the man who would become her husband reacted to it. She told me she'd mentioned it and he'd laughed. He told her he could certainly see the scar, but he saw inside her heart much easier. He told her he loved every inch of her, even the scar.

She told me she wished she hadn't been so self-conscious when she was a teenager. She laughed when she said that now the scar was a happy memory rather than a stain on who she was. I loved it that she could change her thoughts about something that had been so difficult for her when we were in high school.

My inspiration for Christina and Mitchell in the Colorado Matchmakers series, is partially from my old friend and how she struggled with what she thought made her inferior. Her name is Christina, though her husband's name is Bart, not Mitchell.

In my story, Christina Bristol is half Sioux. She wasn't accepted in her home town and neither was her mother. When she meets Mitchell Powell, the world changed for both of them. Mitchell had a birthmark on his cheek. Once he was on his own, he chose to work on cattle drives that kept him out in the wilderness with just the company of a few cowboys. He was more comfortable there where he didn't feel so self-conscious. 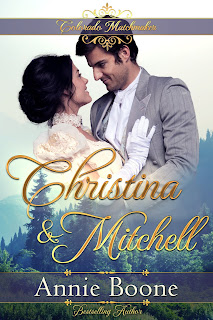 Here's a tiny snippet about what Mitchell thought when he realized that Christina was truly a special woman.

Christina Bristol was a remarkably beautiful woman, inside and out. She was clever, passionate, and kind. Her life had been rough, from what she had told him so far, about her mother and growing up part Sioux. She even trusted him with her other name, Mahpiya. Life was good here and her happiness made his heart sing. And she never shunned him. Suddenly he appreciated her even more for telling him the truth.

Writing this story was a sweet experience for me. I remembered my conversations with my friends and tried to give Christina and Mitchell some of the experiences and feelings and thoughts I heard from my friends. We all know that looks have nothing to do with who a person really is. It's all about the heart. I'm thankful to have had these people in my life.

The Colorado Matchmaker series is about how lonely people are brought together by Susannah Lucas, a childless woman in Rocky Ridge, Colorado. Unable to have a family, she turned to helping people find each other when their chances to find happiness and love were slim. Each story is a stand alone story with a happy ending and can be read in any order. Christina and Mitchell is the sixth book in the series.