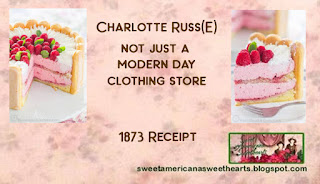 I'm a huge fan of reading. No, really.
And it's not just fiction that I like to read. History books. Craft books.
Even the odd recipe book.
Not odd, you say?
How about recipes (receipts) from the late 1800s... 1873 to be exact.

When I was reading through the kitchen receipts from my newest period volume, one of the names caught my eye.

Charlotte Russ -
Hmm... I know something similar. Why? Because it was the on the "Great British Bake Off"
it was a Showcase challenge and included Lady Fingers, gelatin, and cream... yummy

So I was eager to see what the ladies magazine had to say about the desert... even though the name was ONE letter off from what I've seen before.


Charlotte Russ. – To one ounce of isinglass, add one pint of water, and boil it until reduced to half a pint. A custard made of half a pint of new milk, the yolks of four eggs, quarter of a pound of sugar, one vanilla bean, boiled in a little new milk, and when sufficiently boiled, put in the custard. A quart of very rich, sweet cream, whipped until stiff; stir the isinglass-water, when nearly cool, into the custard, and then stir the whipped cream in thoroughly. Have your mould lined with sponge-cake.
Serve with cream. Peterson’s  Magazine 1873

(Note- this receipt is from a period magazine – all spellings and instructions are from the text. To my knowledge this receipt has NOT been tested for efficacy or safety – The Great British Baking Show tackled a ‘Charlotte Russe’ in an episode called ‘Victorian’)
(The spellings of the words in the excerpt are just that... the spellings from the publication)

One of the hosts on the Bake Off show noted that in the Victorian era, gelatin was made readily available to the average everyday woman. Now, the miraculous desserts made by pastry chefs could be attempted at home without having to boil hooves or other animal parts for the same substance.

NOTE: the images in the header came from https://natashaskitchen.com/charlotte-cake-recipe/
they look so delicious I almost licked the screen.
Posted by Reina Torres at 12:00 AM