And You Thought This Was A Modern Food

Food. We eat it and love it and are sure the products we know today are products of the modern world. Modern being defined here as post World War I. Well, you’ll be surprised with the foods we know today have there origins in earlier times.

I’ve been researching foods to be sure when I mention them in my books that they are accurate to the time. I’m continually surprised at the products that were invented or common in the 19th century.

Most of us know that Coca Cola was created in 1886. It wasn’t the first soft drink, however. Dr. Pepper beat it by a year. Earlier than that, in 1862, James Vernon invented Ginger Ale. The Civil War delayed it’s release but it soon became very popular in soda fountains around Detroit, Vernon’s hometown.

Soda water. It’s the carbonated water that makes soda pop pop. It’s found naturally but creating it is what made all the future soft drinks possible. That happened in 1767. I never realized manmade carbonated water was 250 years old. Lemon was the first flavored soda water.

Marshmallows came into being in 1850. I doubt they were jet puffed back then. Toffee or taffy as well as butterscotch became popular with lower cost sugar around 1800. What would Valentine’s day be without Conversation Hearts (1866)?

If you’ve read my book Pearl’s Will you’ll know that by 1910 Cracker Jack (1893) and Tootsie Rolls (1896) were favorites for Americans all over the country. Jello was first available in 1897.

I sure didn’t know that Saccharin was invented in 1879. Seems people wanted low calorie sweets back then too.

So what about non-candy foods?

As in much of Western culture, the Christian influence on society dealt with food also. One of these is Welch’s Grape Juice invented in 1869 by Dr. Thomas B Welch, a dentist. (Hence the brand name.) Being a devout Methodist, Dr. Welch didn’t approve of wine being served in Communion. He began bottling unfermented grape juice and soon the company was producing and selling quantities of the beverage.

One canned food was credited in reducing infant mortality in North America: Borden’s Sweetened Condensed Milk. Invented in 1856 to fight food poisoning and other illnesses related to lack of refrigeration, the Civil War helped make the product a household name. The military needed milk that wouldn’t spoil.

Can you imaging not having potato chips, that staple of the snack industry? They were the invention of George Crum, a chef at Moon Lake Lodge resort in Sarasota Springs, NY. When a customer sent back an order of French Fries (18th Century) which were sliced potatoes rather than the rectangles  we know today, saying they were too thick, he sliced them very thin, fried them brown and served them. They were a hit and the potato chip was born. 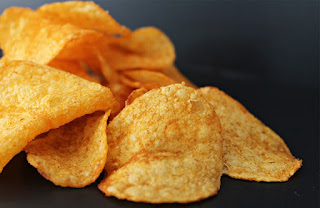 Television advertising wasn’t even dreamed of when Philadelphia Cream Cheese was invented in 1872. I doubt the creator was thinking of angels since the legend is that William A Lawrence eavesdropped a conversation about the recipe and ‘promptly went home and made cream cheese.’ This wasn’t the Brand name known today. It was named that because Mr. Lawrence sent the cheese to be packaged and shipped out in Philadelphia, PA.

The Dancing California Raisin came about 100 years after the product. Legend has it that in 1873 there was a severe drought in California and the grapes dried on the vine before they could be picked.

These products have seen a lot of change over the years, yet their popularity has lasted upwards of two centuries. Other products have gone by the wayside. I must say, I'm glad Celery Jello isn't one of the flavors that lasted into the 21st. century.

Posted by Sophie Dawson at 2:46 AM