A Writer's Life-Lemons to Lemonade by Zina Abbott 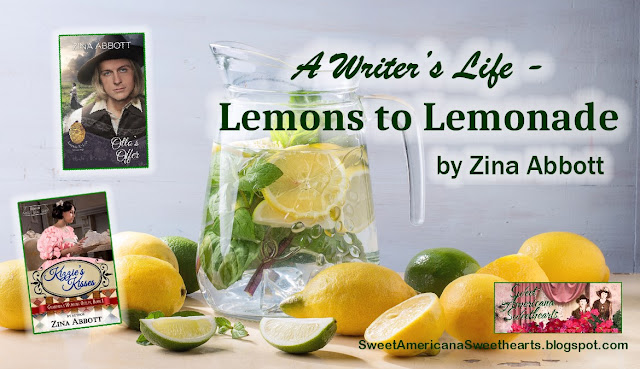 In the past I have written blog posts with the theme of “true confessions—I needed to make major changes on this book.” In a way, this is one of those posts.

I, along with eight other authors, wrote and prepared for publication our books in the Lockets & Lace series scheduled to be released the last two weeks of January, 2018. The December holiday season was a busy time for most of us, myself included. Perhaps it was because I also wrote the prequel for this series, but I found myself pushed for time to finish my full book for Lockets & Lace, Otto’s Offer. The main plot I have had in mind to write for years. However, the fine details, like some of my characters’ names, I did not choose until right down to the last minute. 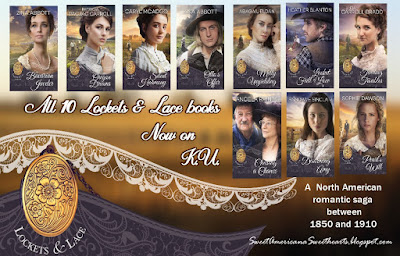 I needed my female protagonist (we used to just call that person the heroine) to be hiding behind an assumed name. I considered some of the more common surnames of English origin—Smith, Johnson, Jones and Brown—and settled on Jones. I felt Smith was so common a surname, sometimes people in certain circumstances using that surname can be suspect. At all costs, my heroine, Libby, could not afford to be viewed as suspect. I chose the name Jones, one I know is of Welsh origin and very common in the United States.

And, so, the process of getting our Lockets & Lace books published and promoted progressed. We had cover reveals. We had preorders with book descriptions. We offered snippets. The names of my main characters were out there in public view.

I was almost finished writing this book when it hit me. I have used the surname Jones before. I have used it not in just any book, but in my Kizzie’s Kisses which was part of the Grandma’s Wedding Quilts series (GWQ), also by Sweet Americana Sweethearts authors. Kizzie ended up married to Leander JONES. If that was not enough, Otto in my current book is Kizzie’s cousin.

Next complication: the Sidney and Jemima Atwell children belong to the GWQ series and Kizzie’s siblings belong to other authors. However, the cousins, the children of Jefferson and Carlotte Atwell which I offered up and no one seemed interested in, were solely my creation. Just as a couple other GWQ authors wrote books that belonged to two series’—GWQ and one of their own—I decided to do my own series, Atwell Kin, involving MY characters. Kizzie’s Kisses is book 2 in both Grandma’s Wedding Quilts and Atwell Kin. Otto’s Offer is book 3 in both Lockets & Lace and Atwell Kin. (And, yes, I have started the prequel, book 0, Charlie’s Choice and have planned book 1, Virginia’s Vocation.)

All well and good, except I managed to write myself in a corner by coming up with two totally unrelated characters in two separate books, both having the surname of Jones.

Somewhere from the time I was young I was taught if I was handed a lemon to make lemonade. Take something that was sour and inedible, and sweeten it up until it is a tasty treat. A few rewrites later, that is exactly what I did with the surname Jones in Otto’s book. I added a chapter with details that had not been part of my original plot. I reintroduced one of my favorite secondary characters from Kizzie’s Kisses. I used it to solidify the growing relationship between Libby Jones and the Atwell family and their connected kin.


How did I do it exactly? Since revealing the details would be big spoilers for both Kizzie’s Kisses and Otto’s Offer for those who have not read either or one of those two books, I won’t say exactly how I wrote it. All I will say is this: once Libby realized the misunderstanding regarding the name of Jones she had assumed as an alias, she tendered this thought:

I should have chosen the last name Smith.

That was actually my thought until I found a way to take that writing lemon of my own doing, and I turned it into what I felt was some excellent storyline lemonade.

Zina Abbott wrote for both the Grandma’s Wedding Quilts series and the Lockets & Lace series.