The Prairie Doctor's Bride ~ An Excerpt

Nelson Graham, the doctor in my latest sweet western romance, the Prairie Doctor's Bride, is in need of a wife (and a nurse.) Growing up in the east, he attended a boarding school and then a university in Boston. He never had much contact with the "fairer" gender and so when he decides to take a wife in Oak Grove from among the mail-order brides that the town has procured, he is more than a bit out of his comfort zone.

He makes a list of attributes he expects in a wife, but he also wants to make sure she will work beside him as his nurse. He is not expecting a love-match. There wasn't much love in his parent's marriage and so he decides the best he can hope for is a help-mate.

He goes about meeting each mail-order bride and assessing them to see which one would work out for him the best. Needless to say, I had fun with this part! 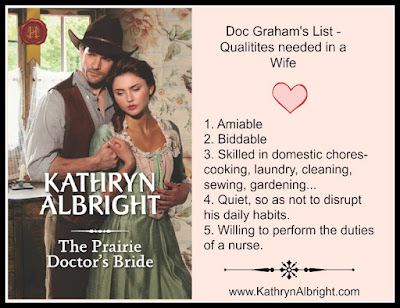 The following is an excerpt of one such meeting ~

The next afternoon he called on Katie O'Rourke. He'd heard good things about her from a few of his more gossipy patients. Miss O'Rourke had the start of lines near her pale blue eyes and a more generous girth than the other brides. He was immediately drawn to her pleasant smile and outgoing personality. He invited her to dine with him in the hotel's restaurant.

“I’m surprised you asked for me, Dr. Graham. I imagined that you would be interested in a younger woman. After all, your first choice was Mara. She’s the youngest of us from the train.”

“There is something to be said for life experience in a good marriage, Miss O’Rourke. You and I are likely close to the same age and have far more in common.”

Rollie brought in two bowls of cabbage soup and two plates of scalloped ham and potatoes. He set them down before Nelson and Miss O’Rourke. “Hello, Doc. Ah…Miss Katie…I would appreciate your opinion on the meal.”

Nelson raised his brows. Miss Katie, was it? It wasn’t like Rollie to solicit anyone’s opinion, especially when it came to his wife’s cooking. Ever since Rollie married Sadie, he had said that she could do no wrong.

“Oh, Katie here is a fine cook,” Rollie said, catching Nelson’s expression. “She’s been teaching Sadie and me some secrets from her native Ireland. I wish she had been here for Saint Paddy’s Day.”
Across from him, Miss O’Rourke smiled. “You’re too kind, Mr. Austin. I’m sure this will be delicious.”

“Well, I’ll be waiting to hear your thoughts.” And with a quick rap on the table as goodbye, Rollie headed over to another table to speak with another couple.

She could cook! That was good news for Nelson’s purposes. He settled back to enjoy his meal, his opinion of Miss O’Rourke rising steadily.

“What is it you did before coming to Oak Grove?” he asked halfway through his soup.

“Ach. I suppose you might think that I was married before, seeing as how I’m older than the other brides, but I haven’t had the pleasure.”

“It was on my mind,” he admitted. “I find it refreshing that you don’t make excuses. Sensible.”

She took a bite of ham and potatoes before continuing, “Ye see, I took care of my parents. First my ma fell sick, and it became my duty to do the cooking and cleaning and tending to my sisters. Then, a year after she passed, my da had an accident on the river. He needed my help after that.”

“What about your sisters? Did they help?”

She shook her head. “They married off as fast as you can say Christopher Columbus. First Bridget and then Susan. I’m glad of it. They have bonny husbands and they are happy.”

Another mental check went down on the positive side his list. She thought of others before herself, and she’d cared for a sick mother and ailing father and hadn’t minded her duty. “Miss Katie,” he said. “The fact that someone hasn’t snatched you up bewilders me.”

A becoming blush rose up her apple cheeks. “It’s hoping I am that I’ll never have to care for another sickly person again, unless, of course it was my own. You see—I like to be out of doors and I’ve had so little chance to do that. A garden of my own to tend on my own little patch of land, and cooking what I grow. Could anything be better than that?”

Oh no. That didn’t sound like the life he had envisioned. “What about helping your husband?”

“I suppose it would depend on what he did. For instance, I do like animals you see. And as I said—growing things. Anything that is out of doors.”

Her eyes widened. “Are you asking me for my hand?”

His heart nearly stopped. “No, no!” he said quickly. “Of course not. It’s much too soon.”

“Well, then, just what is it you are saying?”

“I’m obviously not doing a very good job of making myself clear. I meant to say, or to ask…” He was stumbling about like a fool! He took a deep breath and began again. He leaned forward. “I would expect my wife to work with me. In my office. Doing things such as a nurse would do.”

She snatched herself back from him as if burned. “I’m sorry, Doctor. I’ve done my duty as a daughter and I hope never to look on another hurt or dying man or woman in my life. It’s my heart, you see…”

“No. I don’t see,” he said perhaps a little too crossly. “You are experienced. You are obviously well suited for the type of work.”

“But I couldn’t bear to go through it again. Every person I tended would remind me of my ma or my da. I—couldn’t.” The last was said in a whisper as if she was remembering more than she wanted. Her eyes filled with tears. She stood. “I won’t be misleading you to think that I would.”

Others in the restaurant were watching the drama with growing interest. This was not how he anticipated the afternoon going. “Please, Miss O’Rourke. Sit down again. I would have you finish your meal.”

She stood there a moment, undecided.

“Believe me, I do understand. I’m disappointed, for myself, but I completely understand your position.” It was obviously too much for her gentle nature.

“Are we to be friends then?” she asked, her voice uncertain.

“That would suit me fine. A person can’t have too many friends.”

“To be sure,” she said, gave a relieved smile and slowly sat back down to finish eating.

I hope you enjoyed this excerpt! 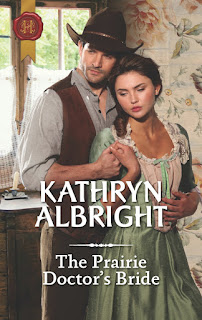 Raising her son alone, penniless Sylvia Marks has had enough of being the subject of town gossip. But when her son is seriously injured she'll do anything to save him…even kidnap handsome Dr. Nelson Graham!

Nelson knows what he wants in a wife; she's to be amiable, biddable and skilled in domestic chores. Gun-toting Sylvia Marks isn't what he had in mind, but as the two are forced together he realizes she's exactly what he needs! 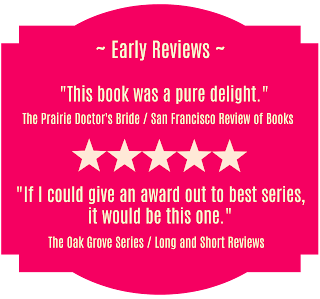 To find out more please visit my website at  www.kathrynalbright.com

To purchase, or read more reviews...