Melting Pot Themes in My Stories

One aspect of frontier stories that I love is the “melting pot” society of immigrant populations. Family genealogy tells me most of my ancestors were already in the United States by the 1700s.  But in those years most people didn’t travel far from where they were born, because travel was by horse and wagon. In order for the plots of putting a character into an unknown situation (which I love), I need time periods when stagecoach lines and train routes had been established. Hence, my favorite periods are post-Civil War and settings are west of the Mississippi. I’m a California native, and I’ve visited lots of places in the western states so I have visuals of lots of different places in my memories.

Why am I writing all this? Because all of the above came in to play when I developed my plot for Ione’s Dilemma. I wanted to take a young woman of a more-privileged-than-most lifestyle (daughter of a Des Moines’ surgeon) and throw her into a working class situation where she had to fend for herself away from everything she’d known. On top of those obstacles, she has to deal with a small-town Texas carpenter aspiring to expand his business who thinks because she comes from a big city, she’ll have great ideas. Sound like maybe some tension is created?


Ione’s Dilemma is currently on preorder for 99 cents. Price will increase to $2.99 on January 17th. (Although the book is Book 6 of the Dorado, Texas series, it can be enjoyed without reading the previous stories. They are how several other characters in the town who may appear in this story met and fell in love.) 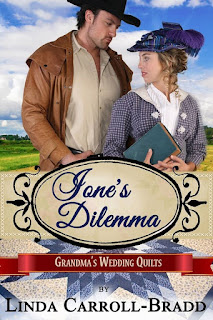 When Ione Forrester calls off her wedding, she becomes the social pariah of Des Moines. Much to her society parents’ chagrin. To escape the gossip, Ione accepts a teaching job in Dorado, Texas, vowing to avoid scandal at all costs. Relocating from a doctor’s household with cook and maids to a room in a boarding house is quite an adjustment. Then she has to face her biggest challenge—a schoolhouse full of students.

Carpenter Morgan Shipley has been working hard to build his business and now he’s looking for companionship in his life. An ad for a mail-order bride brings a deluge of letters, and Morgan adopts the role of matchmaker to share the wealth among other Dorado bachelors. To his surprise, an intriguing woman from a big city arrives in his small Texas town. Correspondence is nothing like interacting with a flesh-and-blood woman every day. But Ione wants nothing to do with Morgan’s attempts at courting, which makes him try even harder. (Book 6 of the “Dorado, Texas” series)
I hope you enjoy my story.­­­­
Posted by Linda Carroll-Bradd at 1:30 AM