I am very excited to see you. I, for one, am ready to throw out the old and bring in the new. Let me wish everybody who is reading this a wonderful New Year.  I hope today is the first day of the best year of your life!

Let me talk about another reason I am so excited.  If you haven’t heard, Sweet Americana Sweetheart authors are releasing a new series, Grandma’s Wedding Quilts!

There is a prequel and eleven sweet romances that are up for pre-order right now.  They are 99 cents UNTIL each story goes live, at which time the price goes up to $2.99.  Get them now while you can!  Take a look at https://www.amazon.com/Grandmas-Wedding-Quilts/e/B01N0SW5XR! 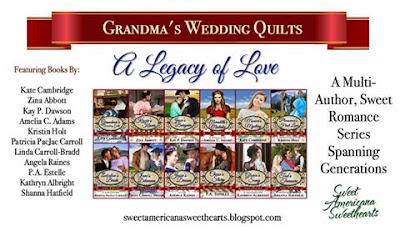 THEN, starting Tuesday, January 3, on our Sweet Americana Sweethearts blog there will be an on-going contest for six days – Big prizes!  Check out rules and all you can win at http://sweetamericanasweethearts.blogspot.ca/p/official-quilt-contest-page.html.

A tiny bit about my contribution, Chase's Story.  It takes place in the Arizona Territory, outside a little town called Hackberry.  Here's a bit of history....

In 1848, after defeating Mexico, the U.S. incorporated this territory as New Mexico (later it split Arizona as a separate territory). In 1851 the area was explored by Captain Lorenzo Sitgreaves. He was followed six years later by Lt. Edward Fitzgerald Beale (1822-1893) who was commissioned with opening and surveying a wagon road along the 35th parallel from Fort Smith in Arkansas to California.

Beale passed through Hackberry and named the spot "Garden Spring". His route was used by many settlers en route to California and one of them, Charles Cummings, established a ranch here in the 1870s.

Shortly after, silver was discovered by Jim Music (1875) and the community grew. The post office opened in 1878.

The mine was named Hackberry after a Hackberry tree which grew beside a spring on the hill where the mine was located. 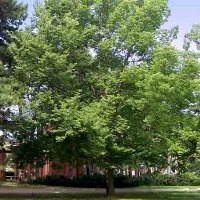 When the the Atlantic & Pacific Railroad (later the Atchison Topeka and Santa Fe Railroad laid its tracks through the area in 1883, it built a station and named after the Hackberry mine.

The National Old Trails highway (N.O.T.) was built in the 1910s through the village, which was sustained mainly by a few small mines and ranches, however, by 1919 the mine had exhausted the silver ore and closed. It was not until Route 66 was aligned along the N.O.T. in 1926 that traffic and new business reached the area.
Business declined after 1979, when Route 66 between Kingman and Seligman was bypassed by I-40. 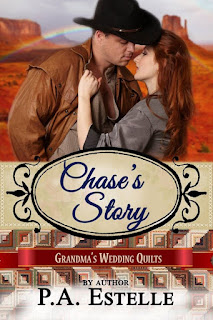 Teaser......
The sun was setting and Chase was hopeful he’d get home before dark. His eyes drooped and he gave himself the luxury of letting his head drop forward. He wasn’t sure if he fell asleep but the wagon jolted to an abrupt stop.

Chase snapped his head up and found he was looking down the muzzle of a gun. More surprising was the holder of the gun, a woman. She was soaking wet, with an eye swollen shut, dried blood coming from a cut somewhere under dirty brown hair, a lip that was split and deep, purplish bruises covering most of one side of her face. Though she stood about five and a half feet tall, she was so thin, a stiff wind wouldn’t have too hard a time blowing her to the ground.

Her dress was one of an indiscriminate color, it was so faded. One sleeve was completely ripped away at the shoulder and the waist was also torn. She had the horse’s bridle in one hand and the gun in the other.

Chase sat up a little taller and pulled the break on the wagon. “Ma’am, you don’t look too good, if you don’t mind me saying so.”

Her bottom lip trembled. “I…I’m sorry, mister, but I need your wagon and whatever water and food is on it. You can keep your cow.” A tear slipped down one of her cheeks. “I’ve got a little one who’s sick and got to get him out of here.”

Point of Interest........I actually lived about thirty miles from Hackberry.  Old Route 66 runs right by Hackberry and the general store, pictured below, is famous and has millions of visitors each year. 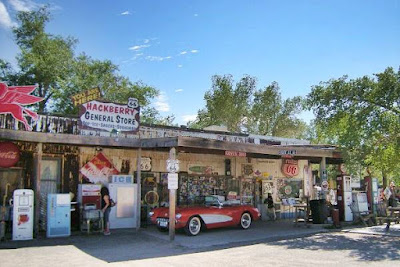