I love using different and unique facts I’ve uncovered while doing research and incorporating making them into a story’s plot. I also like seeing the geography of a place that I’m using as a base for a story locale. Well, I hit paydirt with both of these aspects as I flipped through the pages of Images of America: Comfort, Texas book. Right there on the page was a picture of a non-descript building, but the sign stated “Comfort Turnverein” and an accompanying picture showed a group of men labeled with “Turner Picnic May 1896.”

Soon I’d lost an hour on the click-through-the-URL trail to learn more about these social clubs founded soon after immigrants settled in Texas (and many other places—look up “Turner Hall” in Google images and see how many cities had these clubs) The gymnastic movement of the early 19th century is credited to Turnvater (father of gymnastics) Freidrich Ludwig Jahn. The clubs started forming in Germany while the county was occupied by Napoleon’s armies. In addition to advocating fitness, these clubs in America also provided meeting space to discuss politics and the continuation of German ideals.

A peek inside the turner hall in Milwaukee shows equipment that audiences of contemporary gymnastics are familiar with. (what’s missing is the high bar) The men must have dressed up for the picture because I can’t imagine them exercising in dress shirts and bow ties. 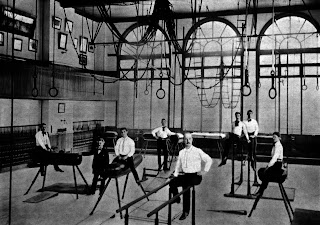 In Ione’s Dilemma, (cover reveal below) to be released in January 2017, the hero Morgan is a member of the local club. This location is where he interacts with bachelors in the area, and he uses those contacts to engage in a little bit of matchmaking. More hints in next month's post...

Posted by Linda Carroll-Bradd at 2:00 AM