Thanksgiving and the Frontier 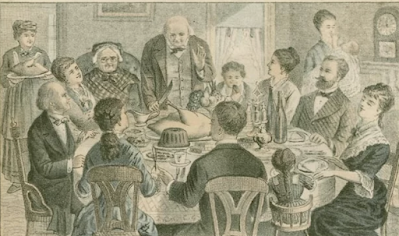 Everyone knows the story of the pilgrims and the first Thanksgiving. Okay, so the story varies depending on who’s telling it and where they got their information, but we’ve heard some rendition. But what about the Thanksgivings of the old west? Did pioneers celebrate it? What about cowboys, ranchers, farmers? There was a huge migration of folks back in the 1800s. What did they do?

Well, for one, Thanksgiving wasn’t an official holiday until Franklin D. Roosevelt set the date for us. But that didn’t mean it wasn’t celebrated back in the day. It was a big thing in New England, widely celebrated and even worked its way into the Midwest. President Lincoln was the one that declared it an official celebration of thanks and what day it was celebrated depended the governing bodies where you lived. It was up to them to set a date. Thank goodness President Roosevelt made it on the same day for everybody.

Of course, we mustn’t forget about Sarah Joseph Hale, the editor of Godey’s Ladies Book. Through the magazine the holiday began to take shape and become what it is today. Leave it to a lady’s magazine. I wonder what the recipes in it were like. 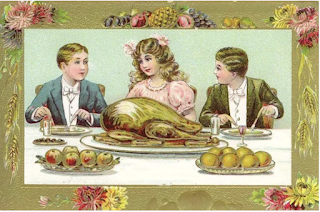 Speaking of food, considering the holiday started in New England, that explains the turkey, dressing, cranberries and loads of pumpkins for pie. Those were regional foods. But out west, those things were a little harder to come by. Life was hard in general, and most folks didn’t even have a cookstove. Dragging one of those out west was no mean feat and very few attempted it. You wanted meat, you had to slaughter it. Butter on your mashed potatoes? Go churn yourself some. Oh, and let’s not forget the sage for the stuffing … what? You mean to say you haven’t ground it up with the mortar and pestle yet or baked the bread? What the matter with you? Get to work!

Needless to say, be glad you have electricity and a stove, not to mention a refrigerator. Me, I’d much rather toddle to the grocery store for a turkey than have to chase it down, catch it, then do all the rest that needs to be done.

But make no mistake, folks back then were thankful for A LOT! And when all was said and done, were grateful for the food on their table and the roof over their heads.