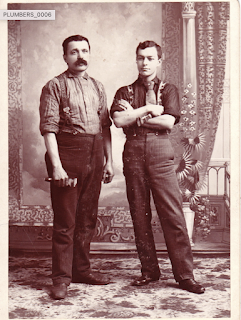 Hi, Kit Morgan here. I've blogged about Victorian bathrooms in the past including ones in public places such as hotels and restaurants. But what about the plumbers that took care of these elaborate bathrooms. Back in the day, when indoor plumbing was at last becoming more common place, those elaborate Victorian bathrooms could be plagued by the same things that plague us today.

So what was it like being a plumber back in the late 1800s and early 1900s? Well, if he happened to live in a town with a decent population, he might be woke up by one of the town knockers. Yep, human alarm clocks that knocked on your windows (yes, windows, not your door) with a long pole around 4 am.

If our plumber were a person of means, he'd have plenty of candles. But not everyone was that lucky, and our poor plumber had to fumble about in the dark to wash his face, shave, get dressed and do any number of other things. It was dark, it was cold, and I can only imagine the amount of stubbed toes that caused a yelp. Folks were conservative with what candles they did have, but in general, it was good practice to keep one handy. 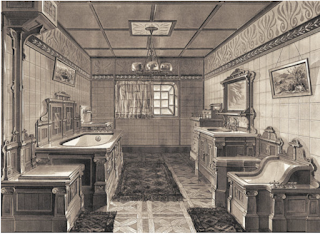 He ate simply, bathed maybe once a week, and like most folks back in the day, had his work clothes and his set of Sunday clothes.

After his breakfast, the plumber was out the door. A lot of folks lived close to their work back then. When a plumber got to his, he was given a service order. Most could handle three a day, depending on where he had to go. And of course, you weren't alone. Two other men were sent with you. Your helpers were in charge of the wheelbarrow full of fittings and various tools that you would need on the job. The plumber got three trips back to his place of employment for supplies and parts. Any more than that and he'd be fired. There were plenty of others waiting to take his place and who could do the work more quickly. 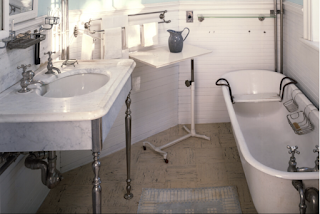 As the number of Victorian bathrooms increased, it didn't take long for our plumbers to figure out that the elaborately carved wood used to house toilets, bathtubs, and sinks didn't do well. So, porcelain replaced wood and many a plumber was happy once more. You can just imagine what some of that wood absorbed.

The history of the bathroom is extensive. The history of the plumber, not so much. These unsung heroes have been around for a long time and thank Heaven will continue to be. I've read a few romance novels where the hero was a plumber and they were great books. Who says the hero has to be a cowboy, or a CEO or a Navy Seal? Yes they make great heroes, but so do the men with the jobs no one else wants to do.