Look what our authors published in July! 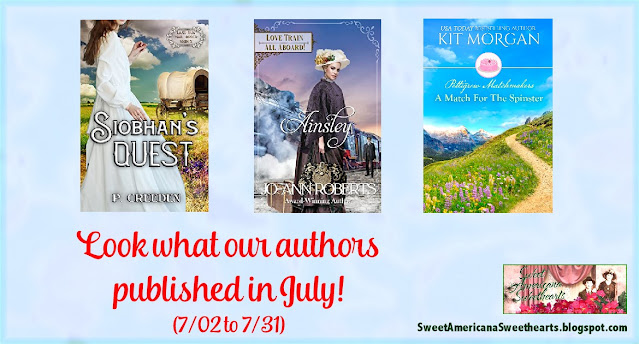 Our authors have been busy writing and publishing books this past month. Here is what we published in July starting on 7/02:

Will a thin, homely woman find love or disappointment when she answers a mail-order bride advertisement from Oklahoma?

Siobhan Ryan has always lived in poverty. She and her brother had to fend for themselves in New York ever since her mother’s passing. But on a whim, Siobhan answers an advertisement for a mail-order bride from Oklahoma. Though she soon finds herself falling for the man writing the letters, she fears answering his proposal, since she can’t imagine that her thin, sickly frame could appeal to any man as great as Sean Murray. And besides, she hasn’t yet told her brother about the advertisement, much less the proposal. But when she strikes up the courage to tell him, her brother goes missing…

Sean Murray and his father traveled west, working on the railroad—until his father’s near fatal accident. Now he’s caring for his father in Oklahoma City and puts an advertisement in for a mail-order bride do battle his loneliness. But when he finally proposes to her, all correspondence stops. To make matters worse, he’s running out of money, and no one in Oklahoma City wants to hire an Irishman. And hundreds of Irishmen are sitting in a camp just outside of town, all waiting for the upcoming Land Run. So, Sean comes up with a plan to help himself and the other Irishmen there, but soon it looks like his plan is for naught and all his dreams of having a wife, a property and employment are falling to pieces at the seams. How will he recover from each heartbreaking disappointment?

…some come as blessings
Anxious to leave behind the whispers and stares of two failed engagements, Boston socialite, Ainsley MacKenzie hopes for solitude on her way to New Hope, Kansas. But when the kindly conductor enlists her help to care for two orphaned girls, she couldn’t say no. Little did she know their uncle and guardian was the one man she couldn’t forget… Lucas Harmon.

Taking a chance, Ainsley offers Lucas an unusual (some might say, scandalous!) arrangement. She’ll look after the children, read them stories and cook their meals until Christmas, giving Lucas time to find a permanent replacement. Yet, the longer she cares for the family the more she longs to be part of it—whatever the risk to her heart.

A Match for the Spinster: A Sweet Historical Western Romance Pettigrew Matchmakers Book 5

A spinster
A failing bakery
And some unexpected help ...

Emmy Baumeister has lost everything, but little did she know just how much. Her parents gone, she has to do the best she can with the family business. Worse, a man shows up claiming her father owes him a lot of money. How can she pay him?
But when a stranger walks into her bakery one afternoon, things begin to look up. Who thought a butler could be so helpful?

Miles Jefferson never intended to get mixed up with a damsel in distress, but this one needed his help and then some. So what if she thinks he's a butler working in his best friend's household? At least this way she'll take his help. But the ruse begins to weigh on him and he's not sure how much longer he can keep it up. Add Mrs. Pettigrew's matchmakers to the mix and he's got his hands full! Can he help the damsel without losing his heart in the process?

In 1917 every man, woman, and child was called to civic duty as the “war to end all wars” encompassed the globe.

When the patriotic call comes, Adella begins her campaign of encouragement by corresponding with the frightened and lonely soldiers. On the cusp of adulthood, the young woman is tired of living a cosseted life and hopes to gain her parent’s support when she wants to volunteer her services to the war effort. Her mother worries for her safety, but Adella is more concerned for her heart.

As a recent college graduate, Gibb is led down a path he never anticipated. And one unexpected meeting at a train station tips all of his carefully laid plans into chaos. In the void, Adella’s words of affection flow across the continents. The image of her smile and the consistency of her letters give him a reason to hope.

Annika Nilsdatter juggles her new manager position at the Riverside Bakery owned by her best friend, Glynna, and being courted by Erich von Griswald, son of the town’s most prominent banker. A friend, the object of her young affections from her growing-up years, arrives in town. Suddenly, she is being flattered by the attentions of two handsome men to the detriment of the business. Guilt plagues her, but, just for a little while, she wants to feel special.

Levka Maksimillian, an undercover Pinkerton agent, is surprised to run into Annika in the town where he’s been assigned a case. At least, he’s in disguise so she didn’t recognize him. But when he’s injured, he has to rely on his good friend’s sister to nurse him back to health. Levka doesn’t want to put Annika in danger, but he has to heal fast. His role in hunting down the head of a theft operation is essential. Will the need for secrecy and their close proximity create a false attraction or a lasting love?

Fleeing the war-torn German Empire, Brunhilde “Hilde” Schuster immigrates to the United States where her cousin’s family teaches her rudimentary English. She finds work as a caretaker for the elderly member of a family whose German ancestors immigrated decades earlier.

Carl Becker, whose parents fled Germany after the failed 1848 revolution before his birth, feels an attraction to the new companion for the Bergmann Oma. However, he is reluctant to strike up a friendship. Resentful of his mother’s constant pressure to marry a good German girl, he decided years earlier he was born in America, he’s an American, and he will marry an American woman.

In the final weeks of November, Hilde learns of an American holiday called Thanksgiving. What do Pilgrims from England and eating turkey, corn, and pumpkin pie have to do with her? Invited to join her employers’ extended family and friends, in the spirit of celebration, she decides to bake and bring a favorite German dessert —Bienenstich – Bee Sting Cake.

Sabrina Whitmore, daughter of a wealthy railroad investor, has finally found a man who accepts her suffragist work. On the night before her wedding, she overhears her fiancé bragging that if he can’t get her to toe the line after their marriage, he’ll just have her committed to an asylum and take charge of her inheritance. Sabrina escapes the family mansion with her maid and rushes to the Philadelphia train station headed toward an aunt in Denver. When she awakens the morning before her arrival, she discovers her maid is nowhere to be found and has stolen her clothes and most of her money. While hunting for her maid, she sees Maeve spirited away by two burly men and is scared her fiancé is hunting her.

Derrick Burkhardt bumps into a woman matching the description of the governess he hired from a St. Louis agency. Needing to get her settled at the ranch before he leaves for the spring roundup, he does all the talking during the buggy ride. When he returns two weeks later, the ranch is in an uproar over the governess’s unorthodox teaching methods. All Derrick sees are his children at the happiest they’ve been in two years. Will he feel the same when he learns the governess is not who she claims to be?

Ellie is on the run from a marriage being forced upon her by her uncle. Her only chance of escape is the man to whom she had been writing for a year. If only his letters spoke of more than friendship.

Paleontologist Rand avoids becoming entangled in marriage. A wife would expect him to stay home with family instead of spending his summers digging for his beloved dinosaur and mammoth bones.

When Ellie arrives in Iowa City, only to discover Rand is gone, his friends send her to the wilderness of southern Wyoming. Will she find love amidst the dirt and rocks or only bones of creatures long dead?

Minnie Carver has a brother and sister to provide for and no way to do it. The sudden announcement a run for land in Oklahoma seems sent straight from the Lord.

Reg Baker knows his brother will inherit the family's store--the same brother who married Reg's fiancée. When his father reads about the proposed Oklahoma Land Run, the man offers what Reg will need to set up a store. If only his father could heal his son's broken heart as easily.

Will a rival store owner's gossip ruin the one chance that Minnie and Reg have at healing and true happiness?

She’s shaking off the dust of her well-worn boots, not looking back and hoping for a transformation. All she needs is a new dress, a new town, a husband, and a fresh start.

Daughter of a traveling merchant, Bethel is tired of peddling her Daddy’s Special Sauce and being run out of town by every sheriff east of the Mississippi. That’s why she’s heading west. She just needs to sell a few more bottles to help fund her trip. After all, who wants to meet their new husband looking like a gypsy? If only she could shake off this pesky sheriff waiting at the stage stop.