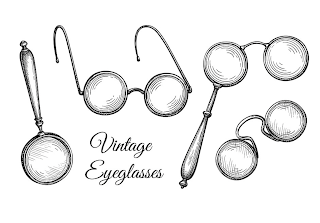 Hi, Kit Morgan here. Today I want to tell you about spectacles! Okay, so I'm not talking about the kind that wows you. Like when a building gets blown up in a James Bond movie. I'm talking about eye glasses in the old west.

Did you know that glasses got their start in the 13th century? That's a long time ago! They've come a long way since then. Of course, eye glasses also started as a magnifying glass with the first wearable eyeglasses coming along between 1260 and 1290. Unfortunately, no one knows who came up with the idea! To this day, the inventor is still unknown.

Over time, spectacles became popular in Europe with different styles popping up. They even became fashionable. One of the most popular styles were called scissor-glasses and some pretty big names of the day wore them. George Washington and Napoleon Bonaparte to name a two. 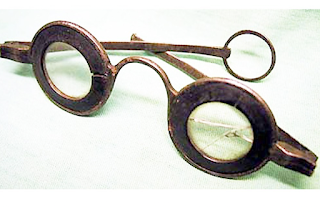 By the 19th century, spectacles were an all out fashion statement. I have characters in my books that wear spectacles, but nothing fancy. That is, until Mrs. Pettigrew came along. She wears a silver and jewel studded monocle. Originally made for correction in one eye only, folks loved them so much, they wore them whether they had an eye needing correction or not. Men were the big wearers of the monocle and the eye piece was associate with men in high society and the wealthy. 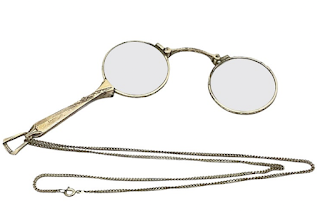 Then along came the Lorgnette. These were two lenses in a frame held with a handle on one side. This was more popular with women. Especially the ones who didn't care to wear a pair of glasses all the time. It became a fashion accessory for many.

Then came the Piece-nez. These were worn tightly on the nose without earpieces to support them and were very popular in the late 1800's. Teddy Rosevelt wore them which only bolstered their popularity. When we think of them, most of us think of some old west bank teller or storekeep.

And of course, in the twentieth century, it was a whole new ball game! Now there are all kinds of eye-glasses out there. Some with huge price tags. I'm still waiting to see if the monocle will come back into style!