Disaster of the S. S. Sultana by Zina Abbott 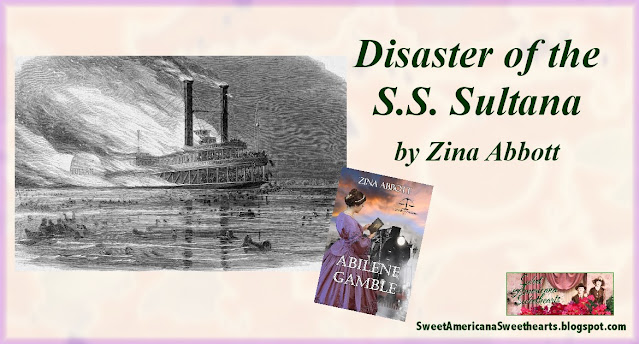 This post is an adaptation of an article originally posted in the Trails & Rails blog belonging to Robyn Echols before she adopted her pen name, Zina Abbott, for publishing her American historical romance novels. It was also one of my first posts on the Sweet Americana Sweethearts blog in July, 2015. I am posting it again since the book which inspired the post, Abilene Gamble, is finally, FINALLY in the process of being published.


For my work in progress titled Abilene Gamble, I spent quite a bit of time researching the explosion on the S.S. Sultana that took place on 27 April 1865.

This steamboat was built in 1863 for the lower Mississippi River cotton trade. During the American Civil War, it was often commissioned by the Union Army to carry troops.

Toward the end of the war, the problem of how to feed and guard prisoners of war became desperate. In particular, the Confederacy was having a difficult time finding enough food for its own soldiers. It did not have enough to feed its Union prisoners of war in all the many prison camps. Because of this, talks had started in March 1865 regarding releasing prisoners of war and sending them home to be paroled on the condition that they would no longer fight in the war.

Much as been written about  Andersonville and the great suffering in that particular prison. Some paroled survivors from Andersonville and other prison camps, such as the Cahaba prison, were on the Sultana. Most of the soldiers on that boat at the time of the explosion were from Ohio. Several soldiers from Indiana regiments also ended up being sent home on the Sultana.

Once the soldiers arrived in Vicksburg, Mississippi, the Union Army prepared to send them up the river by steamboat. For many men suffering from disease and malnutrition, the excitement of finally going home prompted them to quickly board the Sultana. Officers packed as many soldiers on the boat as possible, planning to account for the men who boarded once the boat started upriver. There were approximately 2,400 people, mostly paroled Union soldiers, crammed into a steamboat designed to carry 376 passengers.

In the days prior to the explosion, the Sultana had been experiencing problems with leaking boilers. Twice efforts were made to provide quick, stop-gap repairs in order to keep the steamboat going so it could meet the demands of the Army.

At approximately 2:00a.m. on 27 April 1865, the top-heavy weight of the boat coupled with the swift spring run-off of the river proved too much for the poorly repaired boilers. Three of the four boilers exploded, blowing much of the structure apart and catching the rest of the boat on fire.

Some passengers were killed instantly. Some were blown into the freezing water where they either drowned quickly, or were overcome by hypothermia and then drowned. Only a relative few were fortunate and found something on which to hold that kept them afloat in the darkness long enough for the few rescue ships that arrived within hours of the explosion to pull them out of the water. Some ended up in trees along the banks. Some were crushed by the collapsing decks and, if not killed immediately, burned to death by the spreading fire.

Many of the survivors, including some with horrible burns, were taken to Memphis, Tennessee. Citizens there rallied to help them the best they could, even though these Union soldiers had recently been their enemies.

It is estimated that between 800 to 900 people survived. An estimated death toll of approximately 1,700 makes the explosion of the S.S. Sultana the biggest maritime disaster in United States history, bigger even than the sinking of the Titanic.

However, this event did not get much attention in the press at the time. General Robert E. Lee had surrendered on April 9th, General Joseph E. Johnston had surrendered the day before the disaster and President Abraham Lincoln had been assassinated thirteen days before. The country was tired of hearing about the horrors of war.

Living through bloody battles, only to spend months fighting starvation and disease in a prison camp and then suffering through a disaster like this explosion is the stuff of which post traumatic stress disorder, nightmares, and scars--visible and not visible--are made.  Abilene Gamble is set in 1871, but I planned to add these experiences of my hero as part of the back story/flashbacks so the readers do not think his life began as a whole, fully-developed adult person in 1871.

Abilene Gamble is currently on pre-order and is scheduled for release this coming Friday, February 18th. Here is the tagline, or teaser, for this book:

"He will find her brother, but not for the reason she expects."

After he finished with Nathan, Harry prepared his own bed on the other side of the fire. “You need to rethink this, Mr. Schoenfeld. Stella is by herself. Your sister needs more from you than hoping that once or twice a year you’ll send her a personal advertisement in the newspaper the first Sunday of each odd numbered month. Testify and clear your name.”

“Go jump in the lake, Bradford.” Nathan wriggled his back into the dirt.

Since it was one of his mother’s favorite expressions when she was angry, Harry was familiar with the lake to which Nathan Schoenfeld referred—the lake of fire and brimstone. He had already been blown out of a boat that fit that description into a river. He had no intention of repeating the experience.