Ghost Stories From The Old West

Ghost Stories From The Old West

Ghost stories have been around forever. How true they are is something each person reading the story will have to decide for themselves. Even back in the 1800s, the west was filled with stories and ghost sightings.

One such tale, The Phantom Train of Marshall Pass in Colorado tells the story of an old engineer, Nelson Edwards, who was assigned to a train after the rails were laid across this particular pass. One night as he traveled to check the pass when someone reported there was a defective rail, he was a bit unsettled for no reason he could think of.

He began the long ascent, he heard the echoes of a train whistling far out in the rocks, so he slowed down and braked. His conductor wanted to know why he signaled and stopped the train. But he hadn't given a signal, but he was worried because there was a train behind them climbing the rails.

A whistling continued, and then all of a sudden Nelson looked out the window and a train was speeding as it climbed the rails behind them, the whistles blowing and the conductor standing on top of the train, laughing like a mad man. He prepared himself for a huge crash but it didn't happen.

As it got quiet, the phantom train rolled from the bank into the canyon and disappeared. He hurried out of the canyon and when he got to the next stop, a message was written in frost on his window.

It said, "If you ever run this road again you will be wrecked!"

He quit that day and joined the Union Pacific railroad instead. The weird thing was there was no train wreck in that canyon to be found the next day. 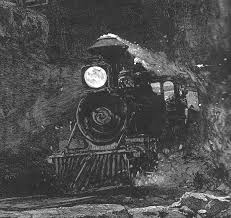 Many of the Forts across the west were supposedly haunted. But the most haunted has been said to be Fort Riley, Kansas. George A Custer's house was said to be haunted as well as the cemetery and even the parade grounds. Even today, the active military base close by will have ghost walks.
There is a rumor that at the University of Texas campus, where the old Fort Brown stood, spirits like to make themselves known.
Do you know of any stories from back in the day about hauntings in the west? Please comment below if you have a ghostly story to tell.