Continuing with our series of cowboy sayings and proverbs related to horses, I ran across this one, which my husband (the farrier and blacksmith) often quotes: 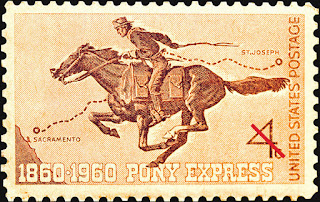 In today's society, we often talk about the "butterfly effect" - that a small, seemingly insignificant thing could cause catastrophic results, because we often can't see the big picture being affected by such a small thing. The proverb "For want of a nail" is exactly the same effect. If a horse needs shoes, it needs a specific number of nails in order to get those shoes upon his feet. Usually 6-8 nails.

In the 1800's, if the blacksmith needed nails, he had to forge them himself or reuse nails that were still in good shape. If the blacksmith makes a bad judgment call on a nail, he may choose too few for the horse, or reuse a nail that shouldn't have been reused. In the course of being ridden or worked, the horse might also pull a shoe off partway, causing him to lose a nail or two. This will make the shoe sprung (bent) or loose. Either way, if the rider doesn't get the horse to the farrier soon, he may lose said shoe entirely.

When the horse loses a shoe in the harsh terrain and under hard work, he may wear his foot down too quickly or get a stone bruise which could lead to abscess. Either way, the horse will pull up lame and then become unable to do the job that he was meant for.

If that job was to deliver a message - especially an important one that needed to be delivered in a timely manner, the message could then be lost. If the message was important information about a battle that was coming, the battle lost - and therefore, potentially, a whole war. All hinging on the fact that the horse was missing a nail in his shoe.

The point of this proverb (which has been passed down for centuries in different forms) is that small things make a big difference and there is no detail that is insignificant.