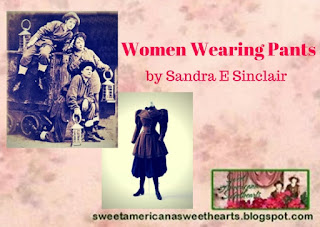 
While doing some research for my 5th book of the Unbridled Series in ladies fashion I learned something really interesting about women wearing trousers. In the early to middle part of the 19th century and despite popular belief women did wear trousers in the 1800’s. My search revealed women wore pants throughout Turkey, India, the American frontiers, Australia, and Europe.

In fact since the eighteenth century, European and American women had also worn such trousers for fancy dress. They were full trousers gathered in at the ankle and were called "Turkish trousers" patterned after those worn by women in the Middle East. Later this style was called bloomers after Amelia Bloomer who had been writing articles about them. So both the costume and its wearers were popularly identified as "Bloomers."

The costume consisting of knee-length dresses over full trousers.

After wearing this style in private, women began to wear these costumes out in public. News papers across the country carried startling articles about the sightings. Below is an article from the Richmond Dispatch.

Yesterday afternoon, Main street was thrown into intense commotion by the sudden appearance … of a pretty young woman, rigged out in the Bloomer costume-her dress being composed of a pink silk cap, pink skirt reaching to the knees and large white silk trousers, fitting compactly around the ankle, and pink coloured gaiters…. Old and young, grave and gay, descended into the street to catch a glimpse of the Bloomer as she passed leisurely and gracefully down the street, smiling at the sensation which her appearance had created. The boys shouted, the men laughed and the ladies smiled at the singular spectacle…. Few inquired the name of the Bloomer, because all who visited the Theatre during the last season, recognized in her a third or fourth rate actress, whose real or assumed name appeared in the bills as "Miss O'Neil." During the Season, however, we learn she severed her connexion with Mr. Potter's corps of Super numeraries and entered a less respectable establishment in this city. 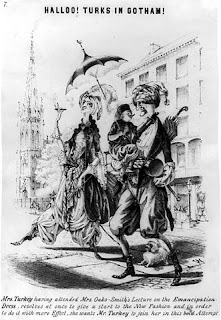 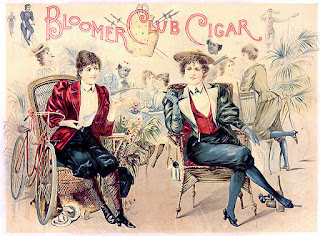 For women in the American West. The wearing of pants was a practical necessity. The West was no place for long skirts: it was either muddy or dusty and the long skirts was a hindrance, especially when engaging in the physical labor that frontier life required.

In Daily Alta California, Volume 23, Number 7703, 25 April 1871 “Marie Susie,” who had worked in mines alongside men was fined $5 in San Francisco for wearing male apparel. She applied to the board of Aldermen for the right to wear pants. Stating she had worn male attire for eighteen years, and sought permission to prevent further police harassment and to protect her from being arrested for doing so. 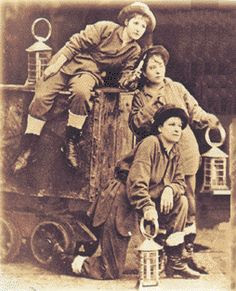 In 1858 Godey's Lady's Book promoted a Bloomer-style costume for exercises and similar clothing worn as bathing costume. Physical training educators used the Bloomer costume in developing clothes for women's sports programs. By the 1880's, the short bloomers continued to be worn as part of gym suits into the 1970's. Bloomers became a bicycling craze around the 1890's, worn as part of a suit with a jacket instead of a short dress. Women wearing bicycling bloomers in the 1890's were less controversial than the outfits in the 1850's, but it wasn’t until the mid-twentieth century could women wear trousers in public without criticism. 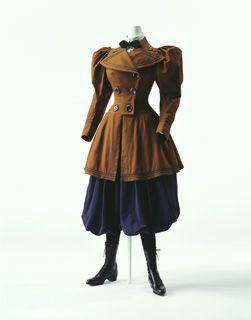 This was merely a snapshot of the information I uncovered. I hope you found it as interesting as I did.

Where to find me.