*Make sure to read to the bottom of this post to find out how to enter the giveaway that celebrates my newest release!*

Isn't it something how people are intrigued and amused by things in miniature? Anything in miniature makes us pause for a moment ~ often in awe and delight. Think about it...miniature dogs, ponies, and pigs. Just the thought of them brings a smile.

A while back I was lucky enough to visit the Huntington Library in San Marino, California, and had my first introduction to miniature books. I looked through a magnifying glass at the tiniest King James Bible I'd ever seen. How amazing it was to learn that miniature books had been around for centuries!

Officially, a miniature book is a book that ranges from one-half inch square to 3 inches (according to the Miniature Book Society.) The Huntington Library and countries outside the United States carry the size up to four inches.

From the dawn of written language there have miniature "books." As far back as 2000 B.C. evidence of writings in miniature form have been found. Back then it was on scrolls of papyrus, parchment or vellum. But...this blog is all about life here in the United States in the 1800s (primarily) so let's fast-forward to that time.

Miniature books became popular here in the last half of the 1800s. They were easy to carry and easy to conceal in a pocket or satchel. Dictionaries, almanacs, and travel books along with religious books (devotionals, Bibles, and tracts) were the most commonly produced type-set miniature books. Popular works were also miniaturized. For example Sherlock Holmes and Don Quixote.

These books sported beautiful etchings and illustrations and were bound in leather. Some even had gilt edges. Today these older books are sought-after collectibles and range in price from a few hundred dollars into the thousands. Here is The Constitution of the United States of America, published in 1787!

I think just knowing this, that I will have to include one of these miniature books in my next novel!

For some fun examples of miniature books that include pop-up pages and fold-out maps check these websites...


And for the worlds's smallest published book ~ 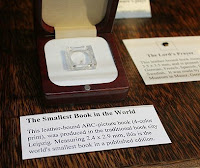 Yes--it's that tiny speck under the magnifying glass! Unbelievably, this book is right in my hometown of San Diego where so many of my stories are set! Next time I am there doing research I will have to make a point to stop in to see this at the Central San Diego Library.

In this age of eReaders and eBooks, where an entire encyclopedia of information is at our fingertips in such a slim object, something like a miniature book is hard to imagine. I hope you have enjoyed this very brief introduction and history of them.

I am running a Giveaway to celebrate!

Visit my website at www.kathrynalbright.com/events for details and sign up for my newsletter for a chance to win a Swarovski crystal bracelet, Amazon gift card, and a signed copy of Familiar Stranger in Clear Springs.