Today’s Blog Tour Tuesday features Iris Kelly and her Dreams of a Rich Life, Book One in the Brides of Cheyenne series. 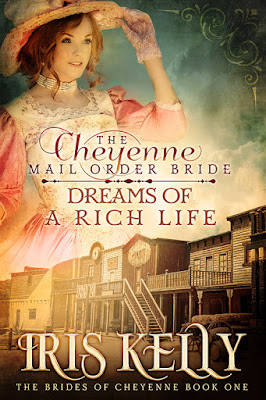 Virginia Bellamy is an ambitious, well-to-do socialite who aspires to marry into Boston’s most elite social circles. But when she fails to attract a proposal that meets her high standards, she agrees to become the mail order bride to a wealthy Cheyenne businessman. He promises her a life of luxury and status. It appeals to her to be one of the most important families in the city - even if that city is Cheyenne.

Lewis Carlyle has worked tirelessly for fifteen years to amass a fortune. It was really all a means to an end - a foundation for the remarkable wife and happy family he hoped to have. But in the weeks before Virginia’s arrival, Lewis is besieged with the worst onslaught of bad fortune; Virginia arrives to find herself betrothed to a pauper.

It is a catastrophe of unimaginable magnitude on both sides. What can Lewis do to make amends for the unforgivable situation he has put Virginia in? Is the social hierarchy in Cheyenne as rigid and unforgiving as that of Boston? And most importantly, will it ever be possible for this determined social climber to love a man who has nothing to offer but his heart?

“I had hoped to put you up at one of Cheyenne’s most elegant hotels. But the cost is now beyond me. The most reasonable accommodation I could find was a room in a boardinghouse. The proprietor is a Miss Mabel Harper, but everyone simply calls her Miss Mabel. You will find her manners a bit rough, but she’s quite fair and trustworthy. And her meals are good, particularly the beef stew and the pies. She’s rather proud of them. The rooms are clean but plain. Very plain. I don’t think that you would ever have seen anything like it, but it is best viewed as a very temporary circumstance. I am sure you can make the best of it.”

It sounded unimaginably bleak to Virginia. Miss Mabel. What a coarse, common name. And a boardinghouse? Isn’t that where laborers stayed? How could this be happening to her? What had she been thinking? The West was every bit as wild and as savage as the tales she had heard in childhood. Bank robbers. Thieving, cheating grifters who had just stolen her future, her security, and yes, her money. Money that was meant to be spent on her house, her dresses, her wine cellar, her parties, her furniture . . .

And who was this man, whom she had thought to marry? Mr. Carlyle walked briskly beside her, clearly dejected and consumed with remorse. She was furious with him, of course, for putting her in this monstrous position. And yet his own life had been shattered as well, with the rewards of a lifetime of work cruelly snatched from him. She had to pity him.

And he did seem to be a man of real conscience. She could actually believe that her loss of security weighed more heavily on him than his own. He had promised to help her out of these frightening circumstances. Well, she would hold him to it, but she could not see a way out of this nightmare. Was that because there wasn’t one?


The Cheyenne Mail Order Bride Dreams of a Rich Life is available on Amazon.  You may purchase it by clicking HERE.

Iris Kelly is a former community college instructor and has had a lifelong affinity for Westerns, dating back to reading every book in the Laura Ingalls Wilder Little House series, and watching every episode of Dr. Quinn: Medicine Woman.

She is fascinated by autobiographical accounts of women’s lives in the Old West; particularly the divide between popular myth and surprising realities.


Tweet this blog post:  She could not see a way out of this nightmare. Iris Kelly & DREAMS OF A RICH LIFE http://bit.ly/1nu0ajg #SweetAmerSweethearts


Posted by Zina Abbott Author at 1:00 AM