Halloween Customs based in Irish Tradition

What a timely chance to share research I conducted for a story based at this time of the year. My story, Wanderer, Come Home, was set in the week before Halloween in 1876. In addition to the overall plot of the Texas Ranger who was drifting and looking for a place to settle in for the winter meeting a widowed rancher owner, I wanted to include details that would have come from one of their heritages. Hero was of Norse lineage and heroine was of Irish descent. I included many of the following items in my western historical holiday story.


Imagine my glee when I discovered all sorts of traditions involved with Samhain (translated to “summer’s end” and in Celtic religion marks the start of the Darkhalf of the year) and All Saints’ Day. The first being that October 31st was acknowledged as the day all the crops should have been harvested. The Irish believed crops left in the fields after November 1st belonged to the fairies. The day also marked the day of slaughter for grazing animals that weren’t breeding.


At nightfall on October 31st, belief is the earthen mounds can open and release the Sidhe and the dead to walk among the living. This is the time of year when the veil between the living and the dead is the thinnest. To appease any dead and keep bad spirits from following them home, people dressed in white and blackened their faces. I also learned that scary masks were worn so the living would look the same as the dead. 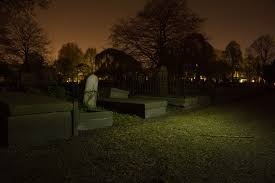 Trick or treating was originally called ‘souling’ when children and the poor went from door to door and offered either songs or prayers for the souls of the dead. In return they were given flattened bread with fruit inside. The original vegetable used for carving was a turnip. An old Irish folk tale relates a deal a lazy blacksmith named Stingy Jack made. He trapped the Devil and would only release him when the Devil agreed not to take upon his death. Years later when Jack dies, he has lived a misspent life and refused admittance to Heaven. The Devil upholds his deal and won’t allow Jack into Hell so Jack is consigned to a life of wandering but he begs for a light to help see in the darkness. The Devil tosses him a flame that will not go out and Jack carves a turnip to hold it. And he became known as Jack Of The Lantern. 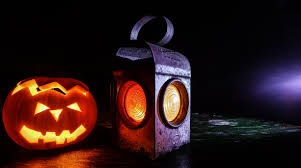 Traditional foods for the day were apple pies, toffee apples, colcannon (a dish of cabbage, potatoes, butter & milk), potato farls (potato bread), and barmbrack (bread or cakes with fruit baked inside). A bit of barmbrack would be left outside to appease any passing fairies. Coins would be placed in any of the dishes and the future was to be bright for the ones plucking out a “luck penny.”
Wanderer, Come Home is included in Cowboys, Creatures and Calico boxed set—12 novellettes for only $.99 published by Prairie Rose Publications. 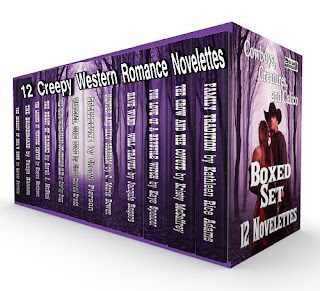 Amazon buy link
Posted by Linda Carroll-Bradd at 2:00 AM