Chinese Railroad Workers in the 1800s

One of my favorite parts of being a historical fiction writer is learning new things. It seems that whenever I hit the Internet to find a piece of information, I end up clicking on this link and that link and learning amazing things that will never actually be used in a book, but will expand my experience and make me a more well-rounded person.

Such was the case this last week when I was researching for my newest novel, A Careless Wind. My male character, Nicholas, went off to work on the railroad, and I was curious to see if any of the Chinese railway workers of the time would be likely characters to place there as well. Sure enough, they were, and I had the chance to learn more about them.

The United States had made a deal with China a few years previous to the date of my novel, which is 1875, which allowed Chinese workers to come to the States and seek employment freely. The other railroad workers didn't like this one bit - the Chinese were willing to accept wages of half what the other men were getting, and there was concern that the Chinese workers would take over all the jobs. Consequently, in many railroad camps, the Chinese (most often called "Chinamen") were treated as outcasts. They slept separately and ate separately from everyone else and weren't included in the camp goings-on. The Americans of the time referred to the Chinese "threat" as "the yellow peril," believing that soon the whole country would be overrun.

The Burlingame Treaty of 1868 was put in place to ensure proper treatment of Chinese immigrants, but the racist persecution became so bad that in 1882, Congress finally banned additional immigration, which was a huge blow to the Chinese community as it separated families. You can learn more about all of this by following this link. It's fascinating history, although at times heartbreaking.

It's ironic that the railroad was a huge force in helping us settle this continent and make it what it is today, and much of the work to enable that progress was done by men who would never be blessed because of it. We have a great deal to thank the Chinese railway workers for. 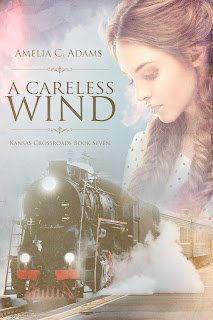 A Careless Wind, book seven of the Kansas Crossroads series, is now available.

When Rachel's fiance was killed in a railroad accident, leaving her with nowhere to go, she came to the Brody Hotel as a last resort. With the help of her new friends, she found comfort and healing, and now she believes herself as content as she can be. But when Nicholas Hardy, her fiance's brother, walks into her dining room, her world falls out from under her. Everything she thought she believed about herself, and him, is called into question.


Nicholas wanted a life of adventure with the girl of his dreams by his side, but the death of his brother cast a pall on everything he'd hoped for. When he sees Rachel again, he thinks life has given him a second chance, but then an injury threatens to take everything away from him again.


Two souls looking for a place to call home . . . and wondering if just by chance, they can find that home together.

You can visit Amelia Adams at her website and sign up for her newsletter to receive fun updates about new releases.