Ice cream has been part of the American culture since our Founding Fathers built our nation.
Records show that George Washington spent $200 on ice cream in the summer of 1790. He even had a 306-piece ice cream serving set at Mount Vernon while entertaining guests. His contemporary, Thomas Jefferson is credited with introducing the first ice cream recipe to the United States after tasting the frozen treat in France. At Monticello, he had ice boxes installed so that he could serve ice cream all year long. He also popularized ice cream in the United States when he served it at the President's House in Washington. 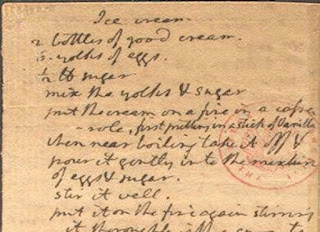 Partial recipe of Jefferson's recipe for ice cream.
Until 1800, when insulated ice houses were invented, ice cream was reserved for the elite. These ice houses helped to popularize the treat for everyone. Even immigrants coming to Ellis Island were often given ice cream as their first taste of America. In the 1920's immigration officials became convinced that serving new arrivals ice cream "was an efficient method for making our future citizens more at home in their new environment." 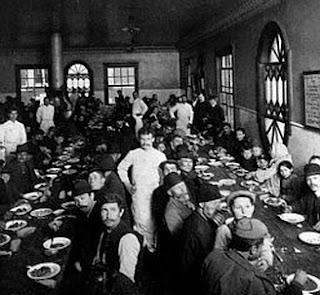 Manufacturing ice cream soon became an industry in America, pioneered in 1851 by a Baltimore milk dealer named Jacob Fussell. From there, as refrigeration, mechanization, and pasteurization advanced, ice cream consumption skyrocketed! During Prohibition, people substituted one vice for another (alcohol to ice cream) with a national consumption of 260 million gallons of ice cream in 1920. Later on, following World War II, Americans celebrated the end of the war by eating ice cream with returning troops once the dairy product ration was lifted.

Wide availability of ice cream in the late 19th century led to new creations. In 1874, the American soda fountain shop and the profession of the "soda jerk" emerged with the invention of the ice cream soda.
In response to religious criticism for eating "sinfully" rich ice cream sodas on Sundays, ice cream merchants left out the carbonated water and invented the ice cream "Sundays" in the late 1890s. The name was eventually changed to "sundae" to remove any connection with the Sabbath. 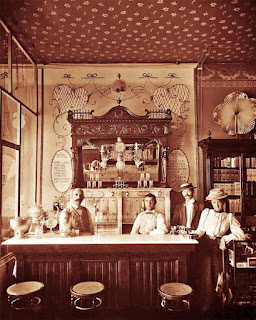 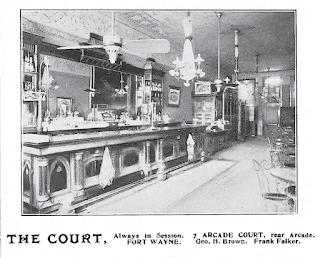 Americans take their ice cream flavors and toppings very seriously. (Personally, I'll take chocolate!) One of the leading ice cream brands, Ben and Jerry's boasts of having more than 54 flavors currently available, ranging from Vanilla to Pistachio to Strawberry Cheesecake, and Chunky Monkey!
And there are so many ways to eat ice cream, too! We eat hard ice cream, soft serve (or custards in some areas of the country), milkshakes, cones to choose from (cake or sugar), ice cream trucks, ice cream parlors, and more. Many ice cream shops having topping bars that may include hot fudge, caramel, sprinkles, cookies, candies, etc. 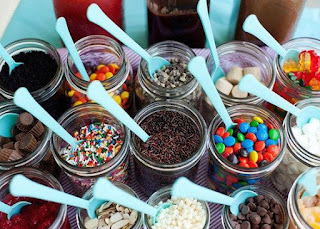 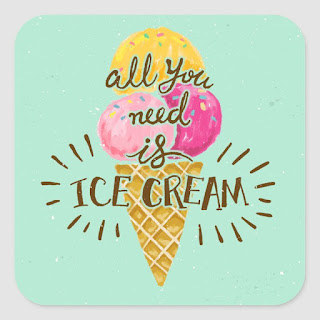 Fun Facts About Ice Cream
In order to create one gallon of ice cream, you need 12 gallons of milk.
Chocolate is the most popular flavor in the United States, followed closely by vanilla.

More than 21 billion dollars' worth of ice cream is sold in the U.S. each year.
The U.S. has the largest consumption of ice cream per person with about 48 pints per year.
First Lady Dolley Madison served ice cream during the presidential inauguration in 1813.
Not surprisingly, ice cream consumption shot up during the Covid-19 pandemic, with dozens of new and hybrid flavors hitting the market.
Italo Marchiony produced the first ice cream cone in 1896 and obtained a patent in 1903.
In 1920, Harry Burt was the first person to have ice cream trucks on the street.
Billy Moll, Howard Johnson, and Robert King wrote a song about ice cream with the phrase, "I scream, you scream, we all scream for ice cream" in 1927. The phrase caught on, and we still say it to this day.
President Ronald Reagan established the month of July as National Ice Cream Month. The official National Ice Cream Day is now the third Sunday in July.
***************
...and speaking of July...my latest release, Ainsley - Book 8 in the Love Train series is now available for preorder. It will release on July 15th! 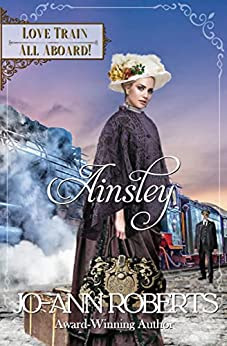 Click Here
She's running from her past.
He's seeking a future.
Will the greatest love come from each other's heartache?