My Barney Lies over the Ocean...

"My Bonnie lies over the Ocean" is a traditional Scottish folk song.

No one is sure of the song’s origin, but some speculate it originally referred to Charles Edward Stuart, known as “Bonnie Prince Charlie.”  The prince and his Scottish supporters were defeated by the British at the Battle of Culloden in 1746. During his exile that followed, it is possible that his Jacobite supporters could have sung this song or one like it in his honor. If questioned by the British, because the term "Bonnie" referred to a woman as well as to a man, they could claim  it was a love song.

It is also claimed that there is a traditional English song called "My Barney Lies over the Ocean" which has a slightly different melody, and this song was sung before the “My Bonnie” song. Musicologist, A. L. Lloyd, claims the "My Barney" song was "A stage song favoured by Irish comedians from the 1860s on.”

During the 1880s, apparently on American university campuses, close harmony groups remade it into the better-known “My Bonny Lies over the Ocean.” In 1881, under the duo of pseudonyms H.J. Fuller and J.T. Wood, Charles E. Pratt published sheet music for "Bring Back My Bonnie to Me".


Theodore Raph, in his 1964 book American Song Treasury: 100 Favorites, writes that people requested the song at sheet music stores in the 1870s, and Pratt was convinced to publish a version of it under the pseudonyms. The song became a big hit, especially popular with college singing groups but also popular for all group singing situations.

In my latest book, Kate’s Railroad Chef, Kate suggests to Garland, who had been a stutterer all his life, to share his nightly menu by singing the words.

Where did I get this idea? I am not an expert on stuttering, a condition with which many people are afflicted. Neither did I extensively research the topic. However, I do recall watching a documentary several years ago about stuttering. Several people who were stutters took part and explained what it was like. One point that was made was, those who stutter when they speak can sing without stuttering. The participants then sang a song as a group. Not one of them stuttered.

That was good enough for me. However, when I prepared to write that scene in my story, I knew I had to come up with an era-appropriate tune. I did not want to use “Oh, Susannah” which is associated with the California gold rush that took place thirty years before my story. Neither did I want “She’ll Be Coming Around the Mountain” which, as it turns out, became popular after the time of my story. It had to be a melody with which most of my readers in this day and age would be familiar. “My Bonnie Lies over the Ocean” came to mind. After discovering the above details—sung by the Irish in 1860s (Kate is Irish); a popular song for singing parts in the 1880s (Garland would be more familiar with that)—I had the melody they used.

The following is an excerpt from the book:

Kate nodded. “You need to be singing the menu, now don't you? Would you be having a piece of paper and a pencil about?” She held his gaze until Garland slowly turned toward a box on top of the counter next to the icebox. From it, he pulled the items Kate requested. She accepted them with a smile. “And would you be knowing the tune to ‘My Barney Lies over the Ocean?’”

“Yes. Even though I don’t s-sing, I listen to music. I think the latest version s-starts with, ‘My Bonny…’”

“Well, it’s the other sung by the Irish I’m knowing, but we’ll not be singing the words to either one, now will we?” Kate walked to the counter and began to write. As she formed her words, she moved her lips and tapped the back of the pencil on the counter. After a couple of minutes she turned to him. “Now, seeing you’re knowing the tune, I need you to be singing along with me. We won’t be singing the chorus, now will we? Only the music to the verses.”

“I don’t know about this.” The skin between Garland’s brow wrinkled and he shook his head as he stepped next to Kate. He held one side of the paper she held out to him. As he stood next to her, his hand trembled and his breathing accelerated.

Kate turned and studied Garland’s response. Was he nervous? Was he uncomfortable about singing out loud, or was it being around her? Then again, as she stood next to him, she felt her own heartrate increase. What was there about this man who, at times, acted like he was annoyed with her? In spite of it, he still managed to draw her to him.

Kate turned her gaze away from Garland. She focused on the words before her as she hummed a note to establish their pitch.

Garland cleared this throat. “I hope I can s-stay on t-tune and not t-trip over my t-tongue.”

Welcome to the Jubilee Diner

Applesauce and spice cake for dessert.

If you’d rather, there’s chicken and dumplings

With carrots, potatoes, and onion.

Again, the dessert will be spice cake,

And two rolls with the meal that you choose.

Mouth open, Garland held onto the paper after Kate released it. He stared at the words. “I can’t believe it. I had a little t-trouble fitting in that extra s-syllable in onion, but I don’t think I s-stuttered once.”

Kate’s Railroad Chef is currently on preorder and will be released on Tuesday, January 12th. To read the book description and find the purchase link, please CLICK HERE.

All three books include a few, unique details about the train wreck that took place just outside of Jubilee Springs. The final book tells the most, especially the details of how Kate was rescued after suffering a severe concussion. 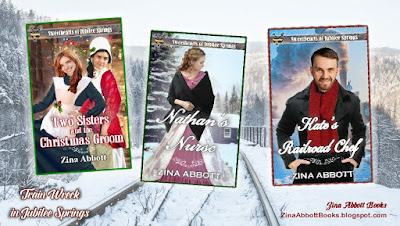 To celebrate the release of Kate’s Railroad Chef, the first book in this trilogy, Two Sisters and the Christmas Groom (Kate is the brunette on the cover) will be free only today and tomorrow, January 11 and 12, 2021. To get your free copy, please CLICK HERE. 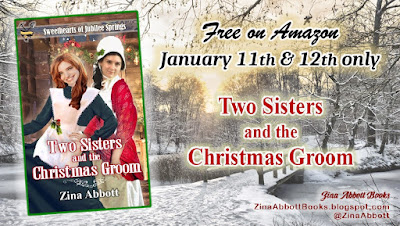 Posted by Zina Abbott Author at 2:00 AM